Spokane NAACP leader sued university for racial discrimination, says she's been identifying self as black since 5 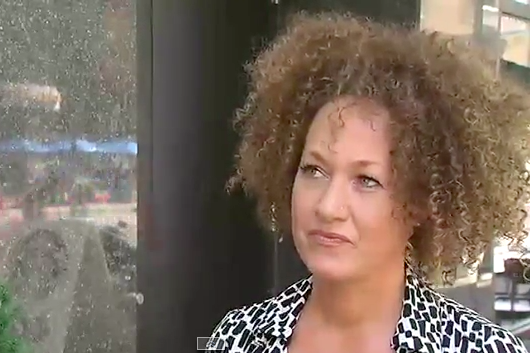 Rachel Dolezal, president of the Spokane chapter of the NAACP, talks to KXLY4's Jeff Humphrey.

Rachel Dolezal's biological brother Joshua will go on trial for charges of sexual assault, according to The Washington Post.

Those charges, revealed Monday, mark the latest development in the case of Rachel Dolezal, the former president of the Spokane, Washington chapter of the  NAACP after her parents went public with the claim that she was white and had disguised herself as black for years.

Joshua, 39, is accused of repeatedly sexually assaulting a boy in 2001 or 2002, who was 6 or 7 years old at the time, when Joshua was 19 years older. Lawrence and Ruthanne, Joshua and Rachel's parents, believe the accusations were orchestrated by Rachel in an attempt to win custody of her adopted brother Izaiah, who is black.

Joshua is currently free on bail and will be tried in August.

The news about Joshua's charges follow the discovery of court records showing that while a graduate student in the fine arts program at historically black Howard University, Rachel Dolezal sued the Washington, D.C. school on grounds it discriminated against her because she was white.

Dolezal filed a lawsuit against the school claiming she was discriminated against for her race, gender and pregnancy. She lost the case, and an appeals court ordered her to repay the university's legal costs.

Meanwhile, on Tuesday Dolezal said she identifies as black during an interview on NBC's "Today" show and that her identity was "not some freak ... mockery black-face performance."

Dolezal announced Monday that she is resigning from her post after questions were raised regarding her race and ethnicity last week.

The credibility of the prominent civil-rights leader in Spokane, Washington, was questioned after her parents told local media Thursday that their daughter has been "disguising herself" as black for years.

"It is with complete allegiance to the cause of racial and social justice and the NAACP that I step aside from the Presidency and pass the baton to my Vice President, Naima Quarles-Burnley," Dolezal said in a statement on the chapter's Facebook page Monday. "In the eye of this current storm, I can see that a separation of family and organizational outcomes is in the best interest of the NAACP."

Dolezal stressed that she will remain committed to fighting for the cause of racial and social justice.

"Please know I will never stop fighting for human rights and will do everything in my power to help and assist, whether it means stepping up or stepping down, because this is not about me," Dolezal continued. "It's about justice. This is not me quitting; this is a continuum. It's about moving the cause of human rights and the Black Liberation Movement along the continuum from Resistance to Chattel Slavery to Abolition to Defiance of Jim Crow to the building of Black Wall Street to the Civil Rights and Black Power Movement to the ‪#‎BlackLivesMatter‬ movement and into a future of self-determination and empowerment."

Meanwhile, the city of Spokane is investigating whether Dolezal lied about her ethnicity when she applied to be on the police board. In her application to Spokane's Office of Police Ombudsman Commission, Dolezal identified herself as having several ethnic origins, including white, black and American Indian.

News of Dolezal's resignation sparked a variety of comments on social media.

So, now since they found out she is white she is a bad person? Even though she has done a lot of good. #RachelDolezal #DoubleStandards SAD

is it just me or does that #RachelDolezal resignation letter read as if she thinks she's "gods gift to earth" or what. chick crazy

In my opinion #RachelDolezal is a pathological #liar w/ sociopathic tendencies. She is in complete denial & offered no apology for her LIES.

On a human level- I feel sorry for #RachelDolezal, but..On a psychological level the woman just went to extreme. You can do good and be U.

Dolezal, in an interview on NBC's "Today" television show, said a major shift in her identity came when she was doing human rights work in Idaho and newspaper stories described her as transracial, biracial and black.


"I never corrected that," she said, "... because it's more complex than being true or false in that particular instance."

Dolezal, 37, who grew up with adopted black siblings,  said her own concept of her race began when she was 5 years old, Dolezal said.


"I was drawing self-portraits with the brown crayon instead of the peach crayon and the black curly hair," she said.

Shown a photograph of herself as a teenager with fair complexion and blond hair in the TV interview, Dolezal said, "I would say that visibly she would be identified as white by people who see her."

"I have a huge issue with black-face," she said. "This is not some freak ... mockery black-face performance. This is on a very real, connected level. I've actually had to go there with the experience."

Dolezal took issue with critics who have said that by presenting herself as African-American, she was putting on a black-face performance - an outdated act in which white actors used makeup to portray black stereotypes.

Dolezal had represented Albert Wilkinson, a black man she worked with in Idaho, as her father and she said they had a family-level connection, according to media reports.

Dolezal said her two sons, who are black, had been supportive of her identity.
"I actually was talking to one of my sons yesterday," she said. "He said, 'Mom, racially, you're human and culturally you're black."