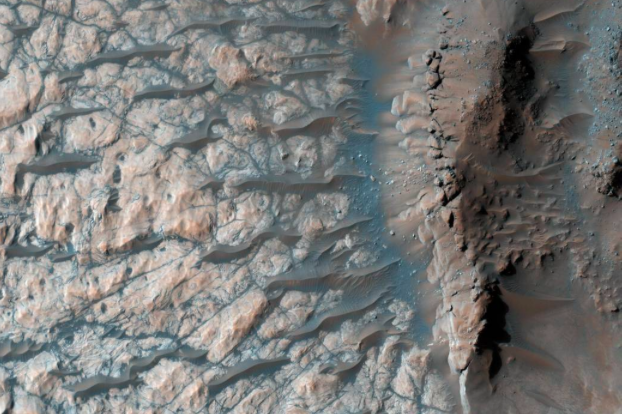 This observation from NASA's Mars Reconnaissance Orbiter shows the floor of a large impact crater in the southern highlands, north of the giant Hellas impact basin. Most of the crater floor is dark, with abundant small ripples of wind-blown material. However, a pit in the floor of the crater has exposed light-toned, fractured rock.

As moviegoers pack theaters to see 'The Martian' and as the Curiosity rover continues to comb the surface of the red planet, NASA is gearing up to make a major Mars announcement Monday morning.

The space agency did not give details on what it will reveal during the news briefing at 11:30 a.m. Monday, but  the list of participants it provided for the conference at its Washington, D.C.  headquarters on Monday may contain an important hint.

• Lujendra Ojha of the Georgia Institute of Technology in Atlanta

• Alfred McEwen, principal investigator for the High Resolution Imaging Science Experiment (HiRISE) at the University of Arizona in Tucson

The presence of Ojha among the group has led to speculation that NASA will present definitive evidence of flowing water on Mars. Ojha discovered possible flows of salt water on Mars back in 2011 while studying gullies that suggested water in the past, according to Inverse.

Based on his findings of apparent finger-like dark water flows, known as recurring slope linae (RSL), Ohja developed the theory that Mars produces liquid salt water during its warm seasons.

Until this year, it was thought that Mars was too cold to host liquid water, but the Curiosity rover's discovery of damp soil with liquid brine in April, and subterranean rocks containing water last month, has rapidly revised our understanding of the possibility of life on the planet.

The Monday news briefing can be viewed online here.