Actually, it’s just June in the Philadelphia sports universe and outside of the mini home run derby at Citizens Bank Park last night (where the Phils and D-Backs set an MLB record with 13 home runs), most of the sports rumblings are coming from Canada.

In Game 5 of the NBA Finals, the Golden State Warriors squeezed out a win over the Raptors, 106-105, to bring the series to 3-2. But the big story was those wretched Toronto fans cheering the injury of Kevin Durant after his attempt at a triumphant return.

As Philadelphians, we have long been stigmatized as the worst fanbase for incidents our grandfathers committed. I suppose that comes with our fandom and the city's rich sports history. The Raptors, on the other hand, have only been around since 1995 and have yet to see a championship victory.

Still, it was Philly native Kyle Lowry who had to tell his fans to pipe down as they cheered while KD sat on the court with a look of shock on his face.

Kyle Lowry and the Warriors tell fans to stop cheering as Kevin Durant walks off with an injury. pic.twitter.com/UldE49bF22

See, we as Philadelphians have learned from the mistakes our elder fans committed, largely because the national narrative will never let us forget (just like how we love the cheesesteak — yuck, yuck, yuck). Yet, when an incident like this happens elsewhere, it get some viral buzz and then gets swept under the rug. Meanwhile, we're still hearing about cheering Michael Irvin's injury 20 years later.

What the Raptors fans did to Kevin Durant, one of the greatest to ever play the game of basketball, was one of the most pathetic displays of fandom I have ever witnessed, and the fanbase as a whole deserves to lose the rest of the series. Fanboy Drake and Jurassic Park need to take a seat, reevaluate if they know the game of basketball and sportsmanship — what do you expect from a fanbase that has been conditioned to cheer fighting from their celebrated national sport past time? — and remember that sports karma is real and it’s terrible.

Fortunately for Raptors fans, they probably won’t have to hear about this decades from now when some former NFL player now analyst is making corny jokes about the incident in a broadcast booth. For some reason, we as a city still only get that distinguished honor.

However, we can take solace in knowing we’ve come such a long way from those days that now major superstars want to play here. Good luck keeping Kawhi after this year, Toronto. I’m sure you’ve made him proud.

In other news from our neighbors to the North, a team of Canadien researchers has deemed the classic playground game, dodgeball, a game of oppression where children are taught to dehumanize their peers.

I have no idea if this is true and have long forgotten any dodgeball memories from my youth so I think I’ve come out on the other side with minimal signs of dodgeball mental anguish.

I have, however, thought about how epic it would be if the four major teams competed in a Dodgeball tournament and which would be the best competitively.

Which of the Philly teams would win in a dodgeball game? (please explain your reasoning if you feel like it).

The majority of the voters believe the Eagles and Phillies would take the tournament. Most Phillies voters cited the ability to catch and throw while being the size of average humans, therefore, able to dodge said dodgeball accordingly.

I have to wonder if the catching and throwing skill set would be the same with a ball the size of a dodgeball.

Every Phillies player can throw and catch the ball really well. There’s only one right answer

My first instinct was the Sixers being the most likely to come out on top. If for no other reason than the ability to palm the ball and the sheer magnitude of their wingspan catapulting the ball toward you. Some believe Mike Scott looks like he’d have the eye of the tiger on the playground.

Sixers. I just know deep down in my heart that @mikescott has to be an animal at dodgeball

Unfortunately, the world may never know which Philly team would reign supreme as kings of the Philly Dodgeball Royal Rumble. You can bet if someone tried to organize this, it would be a sellout.

One of the benefits of June in the Philly sports universe is getting the opportunity to see some of our favorite athletes' passions off of the field.

Eagles safety Rodney McLeod is now sharing his passion for fashion with Philly. Living by the motto “You look good, you feel good, you play good,’ McLeod is the owner and CEO of Back of the House, a DC culture inspired clothing line with a focus on unique conversational pieces including streetwear, vintage, and cozy garments. 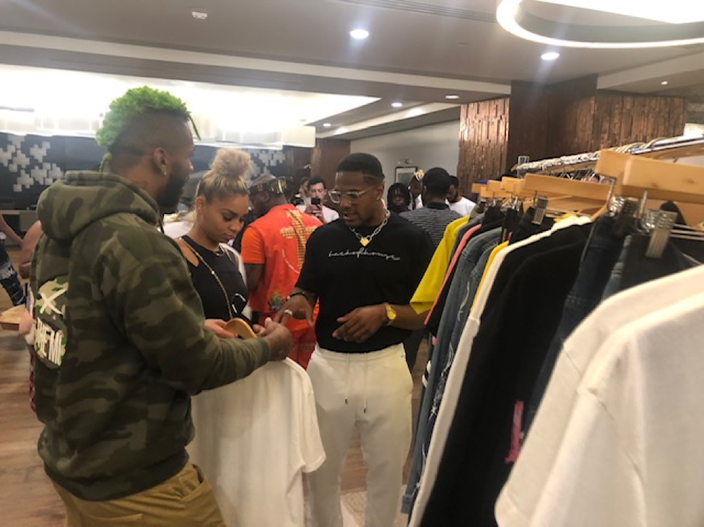 Over the summer McLeod is hosting Back of the House: Underconstruction pop-up shops all over the East Coast.

Starting with his hometown of DC in May, the June stop was a rooftop experience in University City to give his teammates and Philadelphians the opportunity to explore and shop his personally curated collections and collaborations. McLeod hopes to pay tribute to his hometown DC through the pieces and to bring out the confidence in his customers through fashion.

The July pop up location is still TBD, so follow Back of the House on instagram to see where he’ll be next and to check out some of the items!