Natalie Egenolf: All aboard the Sixers hype train, and why this Philly sports art has us feeling good 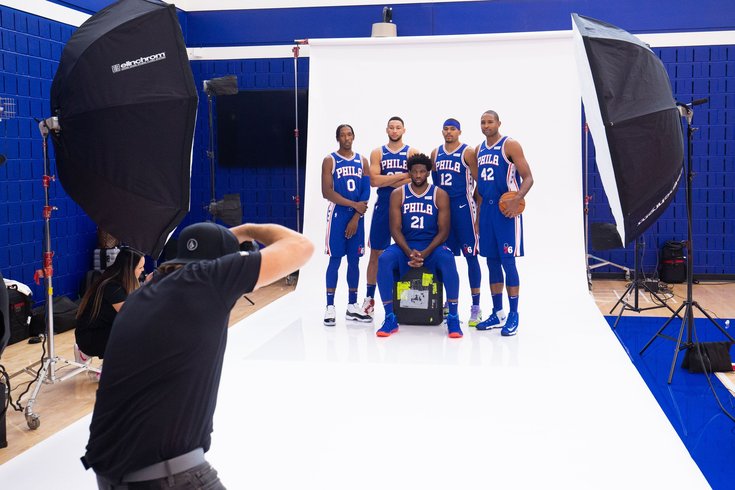 We’re talking practice, as the Sixers hype train is now pulling out of the station and moving full speed ahead toward the regular season.

It’s been a grind the last few years for Sixers fans. The organization has had its fair share of odd issues, including the infamous burner account scandal of 2018 which ushered in new GM Elton Brand, the deterioration of the mysterious Markelle Fultz situation, Ben Simmons shooting woes, Joel Embiid’s tummy issues at the end of last year, and last but certainly not least, the quadruple doink heard round the world that sent the big man with the big heart into the locker room in tears. It was a very symbolic ending to a season that had given the Sixers fan base the most hope since the Iverson Era.

The start of this season has a feeling of calm coming from the organization. The team returned to practice and what came out of media day this week should have each and every fan pumped up for what’s to come.

Joel Embiid lost 20 pounds, got a new do, and kept his sense of humor in tact. Ben Simmons discussed falling in love with basketball all over again —and addressed his newfound willingness to shoot — and Al Horford said he chose Philly because he felt they had the best chance to win. On top of all that, basically the entire team stayed after their first practice for... more practice.

I think it’s fair to say this team, and this city, is ready for Sixers basketball:

Can there be a 24/7 stream of sixers training camp? Idc if I watch an empty gym, I need the content.

Watching practice footage waiting for the season to start pic.twitter.com/5p8UH6U8sB

Two things I need from today:

1) Jalen Ramsey to get traded to the Birds by 4 PM.

2) Sixers to tweet out a picture or video of Ben Simmons cashing 3s at training camp.

Those will be the determining factors for today’s mood.

Paul Carpenter’s art work started on the beaches of Delaware. Originally from Springfield Township, Carpenter then went to the University of Delaware where he landed a job designing and printing skateboards, retail attire, and graphics for a surf shop on the Delaware beaches. After the economy collapsed, the shop could no longer keep on a full time art director so Paul started print screening from his garage for different clients. He designed for skim boards, restaurants, bars, and breweries.

“It was never intentional, it just kind of happened that way. I ended up accidentally having my own print shop. It snowballed in that direction.” Carpenter says.

When he wanted to come back home to Philly, he kept his beach clients and started doing personal designs. Around the holidays and birthdays, he would make specially designed Philly sports art shirts for his family and friends.

“They’re die hard four-for-four fans," Carpenter said. "I wanted to give them something special, so I started to extend the narrative of my work and blend the sub-iconography of Philadelphia and the stuff that’s not so overt.”

To make extra cash, he would apply to street festivals like 2nd Street in Northern Liberties and South Philly. From those personalized gifts, Carpenter said “what started happening was we started coming up with these layers that displayed the grit of the city but also celebrated the culture and sports teams and the aim was to blend all of these different things together under the umbrella of Philadelphia themed apparel.”

At the time, Carpenter was trying to sell fine art but found his street art more accessible to the public.

It was somewhere down the line at one of those festivals that Carpenter finally met Britt James of the Philly Unknown Project face to face for the first time.

James, a Philly transplant from Allentown, started The Philly Unknown as a community based organization that worked with homeless and those suffering from opioid addiction on the streets of Philadelphia. The group’s mission was hand-to-hand street outreach to provide people on the streets with the basic necessities to survive each day, harm-reduction supplies (James notes “to make it through the day”), and also provide information to get to get them into housing or recovery if they could. Carpenter and James had followed each other on social media.

“I was such a fan boy of his art," James said. "It speaks to the people and their Philly pride.”

After they met in person, Carpenter reached out to James to let him know he had a bunch of misprints and shirts that he couldn’t use and he wanted to donate them to the project. His expectations were blown away.

“I expected one box and we ended up with about 600 shirts”.

Britt puts the shirts in ‘compassion bags.’ Generally the compassion bags are filled with hygiene products (toothbrushes, toothpaste, deodorant, hand sanitizer), non-perishable snacks, fresh socks and a t-shirt. With the Paul Carpenter t-shirts, Britt is able to give special bags based on the seasons.

“It gives them pride to put a fresh t-shirt on. Especially when they can put on a special t-shirt that gives them such personal pride. They look at the shirt and they see an Eagles theme and they light up. They also take pride that it’s made in Philadelphia. They can connect.”

Carpenter never expected his art to serve a greater purpose. Once he started to realize how fortunate he was, he knew it was a part of his duty to give back. Carpenter said The Philly Unknown Project hits home for him as he has family who struggle with addiction. The t-shirts started a greater mission to give back — he also works with Marc Vetri and his community initiatives.

“It feels right to give back to the community I draw my inspiration from,” Carpenter said.

With winter quickly approaching, The Philly Unknown will be embarking on their largest annual hand-to-hand outreach initiative called “Cover Up Philly.” Jackets, blankets, sleeping bags, and tents are needed.

“In addition to the t-shirts, they’ll be out there in the below-freezing temps so we have to make sure they cover up," James said.

As for what someone who is on the front lines of the opioid addiction daily thinks the answer is to battle one of the worst issues in American society, James thinks the safe-house OD prevention site that former Governor Ed Rendell is advocating would help.

While the political battle rages on over safe-houses, James and Carpenter will continue to work together and will be collaborating with SREHUP out of Villanova University to help build “Peace Housing” for the homeless and their pets. The housing will have a community garden where Carpenter will paint a mural.

"We want to beautify not gentrify."