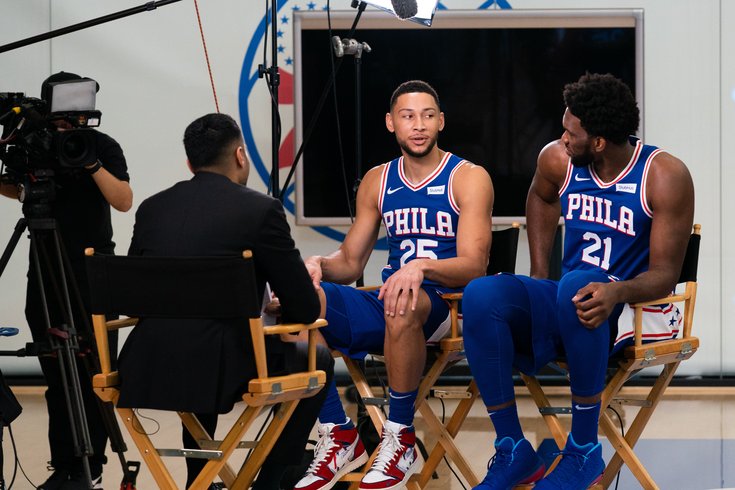 After all the moving and shaking across the NBA this summer, the Sixers emerged as one of a small group of favorites to win the 2020 NBA title. With Al Horford and Josh Richardson joining, Tobias Harris and Ben Simmons committing to long-term deals, and Joel Embiid remaining in place as the franchise centerpiece, they have every reason to believe they can outlast the rest of the NBA when it counts.

But it was Simmons, the man who usually doesn't have much to say, who really underscored the team's drive heading into this season. When given the opportunity to talk about his individual goals, Simmons' mind went straight to the big picture.

"A championship. Every other individual accolade comes along with doing your job. You can't go out and say you want to win certain things unless it's going to help your team win," Simmons said. "I can tell you, Giannis [Antetokounmpo] right now would rather have a championship than an MVP. That's just my mentality, I'd rather see everybody on my team do well and win than individual accolades."

There are people in Philadelphia, including the head coach and members of Philadelphia's new core, who believe they had a championship opportunity in front of them last season. It's hard to argue against them — they pushed the eventual champions harder than anyone else, and if not for a bout with illness for Joel Embiid, perhaps they would have done more than just push the Raptors.

But there were examples throughout that same series of how fragile a team can be if they're built on the fly as the Sixers were last season. The Sixers were struggling to figure out who to play in the minutes Embiid sat right through the final game of their season, and it was only in the closing weeks of their season that they flashed the look of the potential juggernaut they appeared to be on paper.

Health permitting, those problems are in the past, and there seems to be an agreed-upon roadmap for the Sixers to get to the promised land. Less than a week after Brett Brown declared earning the No. 1 seed as a top team goal, his franchise player joined him on that hill. Embiid believes their path to a championship begins with putting the proper focus and energy into their regular season campaign.

"Going into this year, one of the things we have to focus on is winning that No. 1 seed. That's going to take 60-and-over in wins," Embiid said. "My whole mindset is focused on winning. I’ve got to win at least 60 games and I know it's going to put me in a better situation when it comes to other things, so that's what I’m focused on. We’ve got a championship-caliber team, we have a chance to win it, so it's all about building that team chemistry and making sure everybody stays on the same page and I think we're going to be fine."

To get where they want to go, this group seems to understand it will take more than just having an elite starting five. It started in the summertime, with time in the gym alone and workouts spent together, most notably with Simmons and Harris working out in L.A., and it has continued as we push into fall, with many of the Sixers' players reporting back early to Philly to work out together and get runs in before training camp.

Harris may be the authority on what it's going to take and what could be the difference this season vs. last. After all, he was the one who was thrown into the mix midstream last season, altering his role and his shot profile and his prominence in an offensive gameplan in the process. It was a struggle for him, though the Sixers are betting those issues were contextual rather than a sign of things to come. 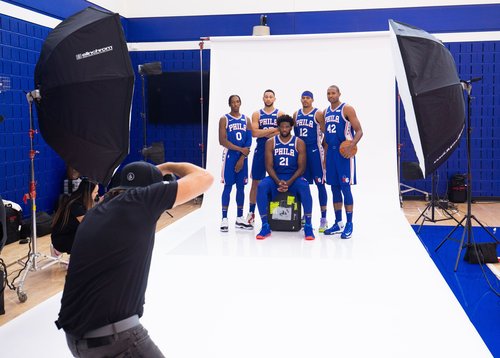 Although Harris expects to be given more freedom to run plays he likes to be in, like pick-and-rolls, he told reporters at media day that his focus has been learning how to play off of the guys he will be expected to close out games with.

"I think the biggest key for us this year is just going to be being able to play off of one another and the ball movement. That's what we've been in these prior weeks just establishing as a collective group, how we want the ball to fly around the court, and how we want to be able to just be able to play off of one another in a way where we're not necessarily calling out each player's number, [but] where we're really out there flowing."

This has always been the dream for Brown on the offensive side of the ball, whose philosophy is ultimately an extension of the ball-sharing offense that led the San Antonio Spurs to a fistful of titles under Gregg Popovich. But it takes a team full of players committed to that idea in order to make it work. You can't have a guy insisting on freelancing, or players who are set on isolating whenever possible, it takes an entire locker room.

Look up and down the Sixers' roster and you'll see those guys. Simmons is one of the game's elite passers and prioritizes the pass to his own detriment at times. Horford has a rare passing talent for his size. Richardson has bounced between roles during his career to do what it takes to win. The young wings may not be extraordinary passers, but they are coming into the season fired up to play a role, not thinking too much about their individual accomplishments.

Even Embiid, who sometimes gets tunnel vision in the post and will be tasked with improving his post passing this season, is driven by his understanding that his choices impact everyone around him. As he explained to ESPN's Zach Lowe during a podcast recorded on media day, the three-point shots that frustrate some Sixers fans are connected to a desire to make life easier on his young running mate.

"I feel like I've shown I will do what it takes to win. I don't really like shooting threes, but if I gotta help Ben, I gotta give him some space and create some space for him to just attack, I will do that," Embiid told Lowe. "If I have to take four or five threes per game just to make sure everybody else on the team got some space instead of staying on the low block and demanding the ball all the time, I would rather make sure everybody's happy. Because at the end of the day, the team chemistry's more important than anything else."

Tuesday afternoon, the Sixers will open training camp and begin to start the process of bringing all this talent together. Forget being a champion, many of these players are still waiting to find out what their role will be this year, with only a group of about six or seven players locked into the rotation to start October.

At the very least, they appear to have the right mix of guys to get things rolling in the right direction.