How do the Sixers replace JJ Redick's shooting gravity? 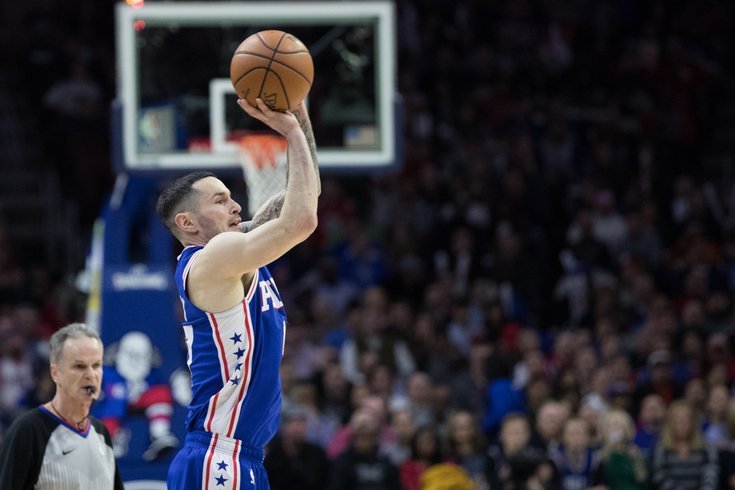 When JJ Redick signed with the New Orleans Pelicans at the opening gun of free agency, it was hard to focus much on his departure with the other rapid-fire moves that came down the pipeline moments later. Jimmy Butler's departure stole the headlines for good reason, but the impact Redick had on the team the last two years can't be overstated.

On a team with shooting issues up and down the roster, it was up to Redick to draw enough attention to make those problems go away. You wouldn't go so far as to say "Mission Accomplished," but his involvement in their late-game sets and his two-man game with Joel Embiid speaks for itself. Time and time again, the Sixers called Redick's number to make something happen, and though he had plenty of high-profile misses in crunch time, he had just as many makes to keep them in games that otherwise might have slipped away.

With Redick out and a whole lot of new guys coming in, it's anyone's guess how the Sixers will get it done from beyond the arc this season.

How (and why) the offense is changing

The Sixers have been pretty transparent about the changes that are coming to their offense. Their aim, for the most part, is to clear as much real estate as possible in the painted area.

But one of their alignment changes is an interesting one, made specifically because Redick isn't here anymore. As we detailed earlier in the week, the Sixers want their wings to start more toward the corners on offense, rather than operating at the "free-throw line extended" as Redick did while he was in Philly.

Why is that? Brett Brown explained the rationale at his luncheon with the media on Wednesday.

"We lifted JJ above foul line extended because Ben could get to him on one dribble as a handoff. When Marco Belinelli came in, because people are used to running to corners, he took it down to the corner and we got some decent stuff out of it, but JJ's route is more precise and quicker," Brown said. "As we started studying our roster, we started studying the success of it and the continuity, the symmetry of why we do things, we deemed hunting corners ruled the day. Make or miss, fast or slow, get to the red spots that I tape on the floor."

The corner area has been one of the NBA's hot zones basically since the league actually started paying attention to math. Expected value on a corner three, because of the slightly shorter distance, tends to reign supreme. But the Sixers also believe their spacing will be better in this sort of alignment, opening up slot drives for Ben Simmons specifically.

When you have a shooter of Redick's caliber, it doesn't necessarily matter where he's at or where he starts on the floor, teams are going to come flying after him to prevent shot attempts. If that means you take him out of the "ideal" spots like the corner, so be it. It would be difficult to argue the Sixers got any less than maximum value out of Redick the past couple years, and based on his numbers and the hefty paycheck he got in New Orleans, Redick can't complain about the benefits of playing in this setup.

But without a Redick-like shooter in the bunch, positioning on the floor and putting players in ideal situations suddenly matters a great deal.

Can you replace an elite shooter with several good ones?

For Brown, everything starts with a simple question: if they're handed an open shot, do we feel good about him letting it fly?

"Let's just start with will they shoot it. Do we feel comfortable if Joel shoots a perimeter shot? Yes. Al Horford? Yes. Now start going on into the fours. Mike Scott? Yes. If Tobias is a four? Yes," Brown said. The head coach went all the way down the line through players on the fringes of the rotation, including players who are at this point question marks from beyond the arc, such as Zhaire Smith and Matisse Thybulle.

His confidence is driven by the idea that willingness to shoot can often be as important as your percentages. As one example, look at the numbers for former Sixers guard T.J. McConnell in 2017-18. He shot 43.5 percent from deep over an entire season, but he was such a low volume shooter despite often being wide open that teams are still happy to ignore him out there, and most often they're rewarded for sagging off.

He's in another universe as a player from McConnell, but Jimmy Butler quietly harmed the Sixers spacing at times last season. Butler has never lacked skill from beyond the arc and his catch-and-shoot numbers have always given teams hope that he can succeed in a hybrid on-ball/off-ball role, but Butler often passed on threes the Sixers needed him to take, leading to offensive stagnation. It's hard to account for that in a box score, and Butler was overall a huge positive, but he was not blameless in their sputtering down the stretch of game seven on offense.

Brown likes this group's chances to be a good shooting team.

"I think that we have the capability," Brown said. "When we end up like okay cool, what are their percentages, that will be a different discussion. But I feel okay if they have open looks and they need to shoot that...You know how I think the game should be played and [it] is proven as we watch our sport."

The percentages, for what it's worth, are not too shabby. There are a bunch of players in the rotation who have good (or at least decent) splits on catch-and-shoot threes over the last three seasons:

The further down you go in the rotation, the more questions you have, but the guys who are no-doubt rotation players all boast decent numbers from deep. When you combine that with the strategy to get people to the corners and the attention you'd expect Joel Embiid and Ben Simmons to draw in the paint, you might not replicate JJ Redick's success, but you're at least giving yourself credible options.

But this all assumes basketball is a static sport when it's anything but. Plays are going to get busted, guys are going to have to take and make shots outside of their comfort zones, and as teams learn how to bother this Sixers team, it will get tougher and tougher to get the shots they want.

Redick's genius is not just in being a great shooter. His movement was constant, and his ability to create a window of separation for himself under duress was exceptional. It gets washed away by the memories of Jimmy Butler domineering the ball, but when the chips were down for Philly, it was often Redick hitting shots in big moments.

We are going to find out just how valuable this is compared to having a bunch of guys who are good, not great shooters who happen to be much stronger on the defensive end than Redick.

Some of you are probably mad even seeing Joel Embiid's name in an article about floor spacing. "He's a big man, he needs to get his ass on the block and post up!!!!!!!"

Point taken. I am not here to argue Embiid should spend an abundance of time on the perimeter, and I am in agreement that his bread and butter is around the rim. But it is unwise to believe the Sixers should just stick him down there and ask him to take a beating every minute and every possession he's on the floor for. It's a difficult, often inefficient, turnover-prone style of offense to play through the post. The NBA has moved away from it for good reason, and defenses are better equipped to stop post offense than ever before.

On top of that, I would not be willing to give up on Embiid as a three-point shooter based on what we know about him to date. Yes, his percentages have not been very good through three seasons, and outside of the first month or two of his rookie season, we have not seen a sustained stretch of play where Embiid looked legitimately good from deep.

But consider the indicators elsewhere. He's a good free-throw shooter on high volume, he has shown advanced touch for a player his size closer to the basket, and it's a part of his game Embiid works on routinely. Giving up on him as a threat to shoot long-term would be a mistake. There are dozens upon dozens of below-average shooters who eventually got better at their craft, and most of them are not as talented as Embiid.

And here's the most important thing — Embiid and Simmons are attached at the hip moving forward, for better or for worse, and Embiid has a much better chance than Simmons to become a good enough shooter to impact the way teams defend the Sixers. Shutting down his development there in the hope Simmons someday turns the corner is downright illogical. Both guys have to work on their games with the understanding that the only way to win titles is to bring the best out of each other by any means necessary. For Embiid, that means living with some growing pains as a shooter, no matter how much it offends your sensibilities as a basketball observer.

If teams ever treat Embiid as a real threat from deep, the whole world changes for Philly. No one would benefit more than Simmons, who suddenly would have all the space in the world to drive into, either to finish at the rim himself or kick to a teammate once the defense collapses.

This is not an excuse for Embiid to settle for lazy threes in transition because he's tired. But it is imperative for the Sixers to help him reach his potential as an inside-out threat, no matter how much you want to emphasize the first half of that equation.