What changes will Brett Brown make to adapt to Sixers' new roster?

There has been one constant over the last half-decade of Sixers basketball, aside from rookies being struck down like curse victims, medical issues of all sorts, and a level of drama equivalent to a bad reality show. Through the good times and the bad, Brett Brown has overseen it all, from Jahlil Okafor street fights to heartbreaking losses on the road in Game 7.

It feels safe to say no one is under more pressure in Philadelphia this season than Brown. There is already a portion of the fanbase who believes him to be unequipped for the job, and the Sixers enter the 2019-20 season with the best starting roster he has had during his tenure. Rumors swirled about his job security ahead of their defeat against Toronto last spring, and while the team ultimately stood by him after the heartbreak, he is the obvious scapegoat if things go south for a team with title aspirations.

With all eyes on him and with a much different roster, you might expect there to be radical changes in Philadelphia this season. But it's small tweaks, not system-wide changes, that are likely in the cards for Philly.

Moving bodies around on offense

If you're among the people who think the Sixers should just try to pick-and-roll teams to death regardless of the personnel at their disposal, I don't suspect you're going to be happy with what the Sixers want to run on offense as long as Brown is the head coach. Their program hinges largely on concepts, not individual set plays, and the pass remains king.

But during a coaches clinic hosted by the Sixers on Monday night, we actually got some insight into what the Sixers may want to do differently this season compared to last. And it all starts with a simple concept — where players are stationed on the floor.

The players to watch in the offense are the guys in the lineup from 2-4, or in terms of the starting lineup, Josh Richardson, Tobias Harris, and Al Horford. Let's look at an example of how Philadelphia's offense might be positioned on an average possession after a made basket for the opponent last season. 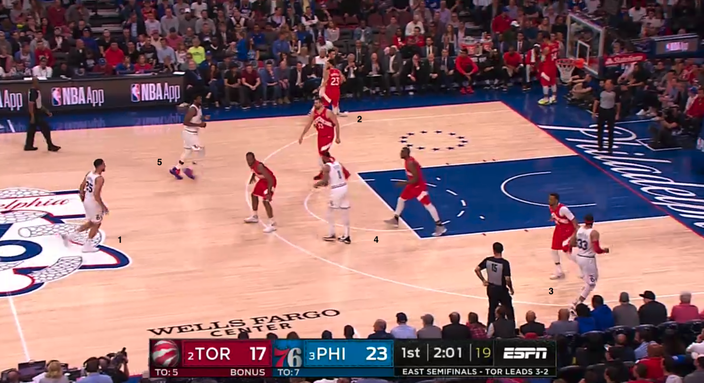 JJ Redick and Harris, the nominal two and three on the floor in the above picture, are both positioned around the "free throw line extended" as the Sixers get into their offense, action that triggered by the first "big" down the floor (Mike Scott) coming to set a screen on the ballhandler. It's not a look that's going away entirely, but it's one the Sixers may not use as much this season.

As assistant coach Kevin Young explained during a coaches clinic hosted by the Sixers on Monday night, here's a rough estimate of where we might see those players shifted to on one of the Sixers' staple entries. 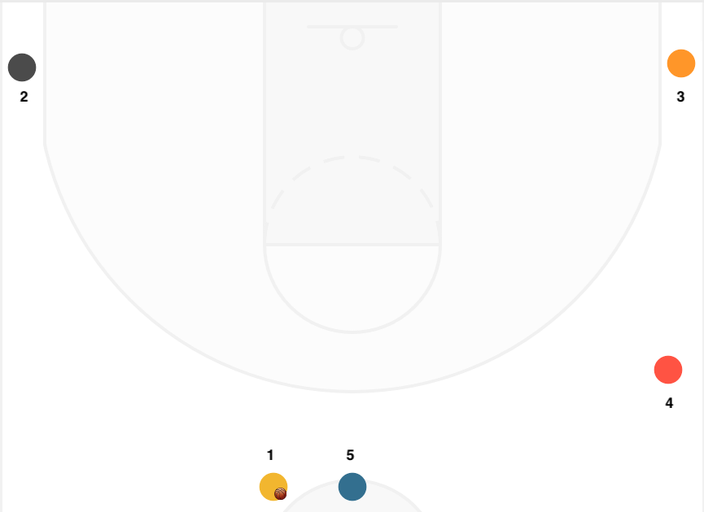 (Before anyone/everyone gets mad — no, Joel Embiid is not just going to hang out at the three-point line all game, he just happens to be starting here sometimes when he's inbounding after a made shot for the opponent.)

The idea with this allignment is simple if you look at all the space inside the painted area. On plays where the center is inbounding after the made shot, Philadelphia's four-men will start in a spot the Sixers refer to as the "four-point line," dragging their defender further away from the basket to clear more real estate for the initial action.

In the above shot from the Toronto series, you're allowing Serge Ibaka to remain on the elbow and show Simmons a crowd in the paint because of where Scott is starting from. The hope with the look would be to give Simmons an easier time at attacking teams using the initial screen and putting the likes of Horford, Scott, or Harris in an optimal position to step into a three or attack a closeout if teams cheat too heavily into the paint against Simmons and Embiid.

Philadelphia's wings are important here too, as the Sixers don't have a shooter of JJ Redick's caliber coming around screens this year. The subtle shift on the floor should help them get more corner threes, but it's also designed to take advantage of Philadelphia's improved athleticism at those spots. Players like Richardson and Zhaire Smith will be empowered to slip flare screens and cut hard toward the rim in order to take advantage of the passing of Simmons and Horford, and to exploit the switch-heavy defenses we see across the NBA today.

Another point of emphasis heading into training camp is how the team spaces around the post, an area of critical importance for this group.

The marching orders here are simple — if the ball is in the post and you don't have it, move. A consistent problem around Embiid post-ups over the years has been Philadelphia stagnating and expecting him to overpower teams all by himself. Whether it's Embiid there or one of their other players who can back guys down, the Sixers are demanding for the other four guys to provide moving targets for the posted player, not allowing teams to bunker down and cheat down to swat balls away.

On the other side of the ball, Philadelphia's big problem last season was an open secret. They got torched by scoring point guards for basically the entire regular season, and the playoffs started off on the wrong foot before Simmons took the responsibility of guarding D'Angelo Russell in the Brooklyn Series.

This season, that problem shouldn't be as pronounced with the personnel they have. With Richardson and Smith around to help guard the point of attack, the Sixers are better equipped to deal with the NBA's staple play, the middle pick-and-roll, on a nightly basis. New assistant coach Ime Udoka, who told reporters Monday night he'll be primarily tasked with guiding the Sixers on defense, is thrilled to work with the talent Philly has on that end of the floor.

"[We have] two of the best bigs at defending the pick and roll and protecting the paint, and at guarding smalls on the perimeter, so I think our versatility and flexibility there is almost endless," Udoka said. "It's a dream team if you're a defensive coordinator...it's like being in a candy store."

The standard plan remains the same. In an ideal world, the Sixers want to keep Embiid around the free-throw line (in their terms, "centerfield") and funnel traffic towards him, minimizing the impact a roll man can make and hoping to coerce teams into taking contested two-point shots. But as Udoka joked on Monday night, in games where Kemba Walker is dropping 50+ points on you, your default strategy is not always going to be enough.

Against guards who might be scorers/shooters first and passers second, the Sixers will be throwing out a variety of looks. There will be looks that bring the big man closer to the three-point line, even with the screener, and situations where they'll blitz the handler, with the Sixers looking to force the ball out of the point guard's hands while aggressively rotating on the back end.

There are other more specific rules folded into their coverage as well. Against the better pick-and-pop bigs, for example, the Sixers will at times apply auto-switching principles which they refer to as "Dirk" after legendary Mavericks forward Dirk Nowitzki.

Some of the points of emphasis are even simpler than that. Udoka, whose Spurs teams battled James Harden's Rockets time and time again, grew accustomed to watching Harden bait guys into fouls with liberal use of rip throughs. As a result, when Philadelphia's point-of-attack defenders are fighting to get over screens this season, Udoka wants his players "showing their hands" with their wingspans out wide and straight, avoiding those sort of attempts to generate cheap fouls.

The overarching message on defense? "Make them feel you," Udoka said.

The Sixers are equipped with an army of big, tough, athletic dudes up and down the rotation, and if all else fails, they want to make sure the other 29 teams in the league are well aware of that fact.