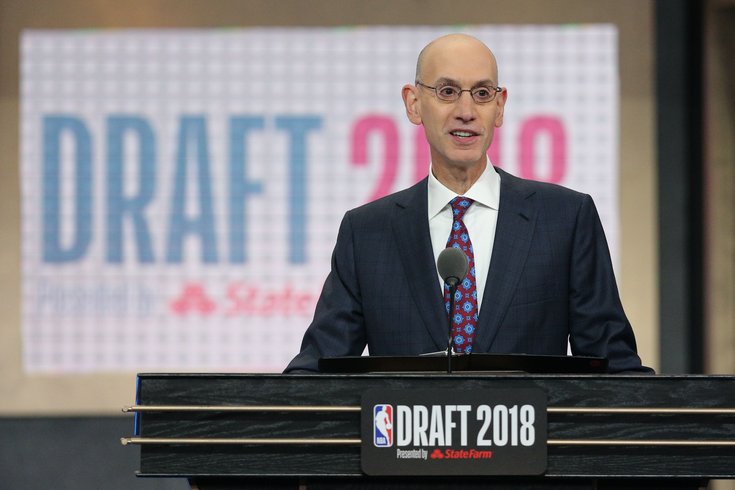 On Friday afternoon, NBA team owners — err, "governors" I guess — voted unanimously to allow the league to punish teams more harshly for tampering violations. Backchannel deals have been a staple of the league for basically the entirety of its existence, but surely, this will be the straw that breaks the camel's back.

The consequences are expected to include larger fines up to $10 million, plus the potential for suspending team executives, taking away draft picks, and/or voiding contracts. NBA officials will reportedly also have the authority to subject teams to random audits each year, including (but not limited to) seizing communication devices (e.g. cell phones) in order to make sure everything is tip-top, and teams will have to save communications with agents for one year.

Ostensibly, the opening of the 2019 free agency period was the onus for change. This past summer was highlighted by a wave of nine-figure deals being agreed upon within the first hour or two of teams "legally" being allowed to hash out deals, and the Sixers were at the forefront of the rapid-fire deals. Before you could blink, they agreed to a sign-and-trade involving Jimmy Butler and Josh Richardson, re-signed Tobias Harris to a massive deal, and recruited Al Horford away from the rival Boston Celtics.

It seems unlikely hundreds of millions of dollars worth of deals were negotiated with several agents, another team, and the players in question in that small of a window, in spite of insistences from Sixers officials that everything they did was above board. You can apply the same skepticism league-wide. To use a non-Philly example, Kemba Walker was a member of the Boston Celtics before plans to take meetings would have even had time to materialize. Tampering is the league's worst-kept secret.

Properly enforced, these rules changes could end up changing how people around the league do business, but that's ultimately what this comes down to, proper enforcement. And everything about how the league operates, from Adam Silver down to the on-court product, suggests the league is more interested in the optics than they are about cracking down on tampering and striving for true "competitive balance."

It's important to note that in the era of player empowerment, "tampering" will continue to be allowed/legally doesn't exist between players who play for different teams. Short of turning into Big Brother, there is no way to prevent players from trying to join up with stars on other teams down the road if that's where they want to be. These stricter tampering rules assume that men in suits are the only people who try to skirt the rules to lure better players to play alongside them, when numerous examples (the Warriors' recruitment of Kevin Durant, Anthony Davis forcing his way to L.A., the new partnership between Durant and Kyrie Irving) show that's not how any of this works.

To be clear, the NBA shouldn't try to turn the league into a police state. The parlor games and off-court intrigue are half the fun of following the league, and trying to prevent friends on separate teams from linking up eventually would be some draconian nonsense. But there is no stopping meaningful tampering if you're not preventing it from taking place between the people who matter the most in the league.

In a star-driven league filled with hundreds of people who have worked their whole lives to reach this moment, in a league where the workers' earning windows are shorter than basically any other profession, in a league where teams spend millions upon millions of dollars and hire people from all over the world to build even the slightest edge over the competition, the NBA wants you to believe a larger hit to the pockets of billionaires is capable of stopping everyone from stepping outside of the rules to win.

It is preposterous on its face, and it cuts against the very win-or-go-home mentality that drives sports to begin with.

If the NBA was all that interested in changing that paradigm, it would have stepped in and altered tampering rules long before the league made a mockery of them this summer. What the NBA is incentivized to do, however, is give off the appearance of competitive balance & fairness. And that comes down to something very simple — economics.

In a move that will impact the Sixers slightly, the league has mandated that teams submit their lineups no later than 30 minutes prior to tip-off, a step up from the previous policy of 10 minutes. The league's official reasoning is that it will help them, "increase transparency for teams, media and fans," and the last group is one I sympathize with having covered Joel Embiid the last few years. If you're going to head down and spend hard-earned money (and your free time) going to a game, you'd like some warning on whether the team's top star is playing or not.

But the idea that an extra 20 minutes is going to make or break a trip down for fans seems ludicrous. By that point, most people will have committed one way or another to their plans, regardless of their method of transportation to the game. The real winner here is the sports gambling market, where there is now a larger window of opportunity to shift lines and reel in bets.

The NBA has openly courted the sports gambling scene in recent years, and it's not hard to understand why. As with fantasy sports, gambling gives people a reason to tune into (or at least monitor) games that they otherwise have no rooting interest in. The 10-minute window changing to a 30-minute window will likely have minimal impact on high-level/professional gamblers. But that extra time and certainty have a chance to draw in the much larger market of everyday people who bet on sports, who in turn suddenly have a reason to care about a Hornets-Grizzlies game on a cold night in February. The more people are tuning into their broadcasts, regardless of the reasoning, the more valuable ad space becomes during games.

It's the illusion of comfort and fairness that matters here, not whether those things actually exist, and that has been a staple of the NBA experience for forever. The rulebook is technically in black and white, but the sport is often officiated differently for stars with cache, and the application of the rules often varies depending on which of the league's various officials is working that night.

When the NBA shows it is genuinely interested in by-the-book enforcement, it will be time to take the tampering rules seriously. Until then, the league will likely operate as it always has, only with an additional layer of scare tactics on top.