Gone are the days of the 'Suxers' jerseys, replaced by a big script 'Phila' across the chest 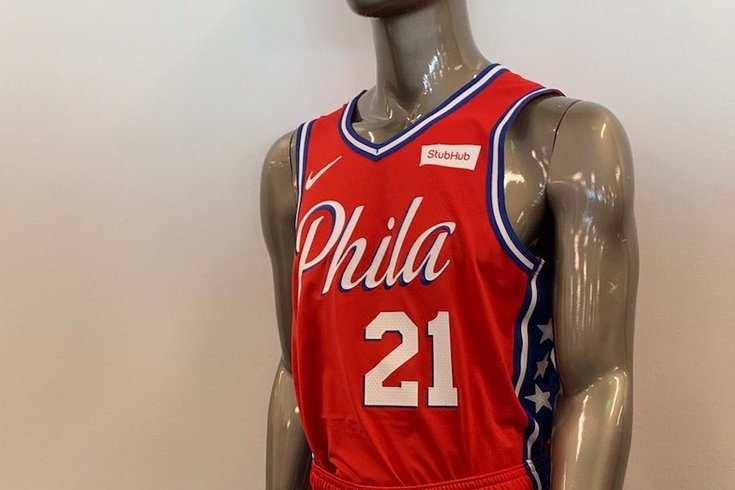 An update of the Sixers' bright red Statement edition uniforms was confirmed Friday, replacing the old 'Suxers' word mark with a gigantic 'Phila' across the chest.

The NBA's current infatuation with constantly updating its team's jerseys means we're always around the corner from a uniform leak, which is pretty fun!

The Sixers' bright red Statement Edition uniforms were rumored to get an update for a very long time, especially after everyone spent so much time making fun of the "Suxers" word mark across the chest. Katie O'Reilly, Chief Marketing Officer for the Sixers, straight up told PhillyVoice's Matt Mullin the word mark would be changed to "Phila" this season.

MORE: Stephen A. Smith brings 'First Take' to Wilmington, is bullish on Sixers

So, on Friday, Sixers Communications Coordinator Zack Neiner "leaked" the new Statement edition jersey, as much as an official member of an organization tweeting a photo from his official Twitter account is a "leak".

In any case, they look fairly sharp:

My first impressions: The "Phila" word mark feels gigantic, but it'll probably look smaller when you're watching on television, or even in person. The Sixers logo on the shorts feels a little silly, but it's not offensive.

The pinched neck, rather than a smooth scoop neck, is my biggest complaint: Nike needs to stop messing around with V-neck styles in basketball jerseys. They're bad, and they should go away forever.

Otherwise, these will look very good in the Sixers' rotation. They're nowhere near as impressive as this year's Classic Edition outfits, which the team announced earlier this year, but that's okay, because those jerseys are perfect.

The only Sixers uniform we're still waiting on, then, is the City Edition, which O'Reilly said will be different from the 2018-19 grey tracksuit look, which I abhorred. The new City Edition will come in late October or early November, according to O'Reilly.

The Sixers open their season at home, on Oct. 23, against the Celtics.