Natalie Egenolf: My day with the Phillies grounds crew

And Carson Wentz shows the heart we knew he had... 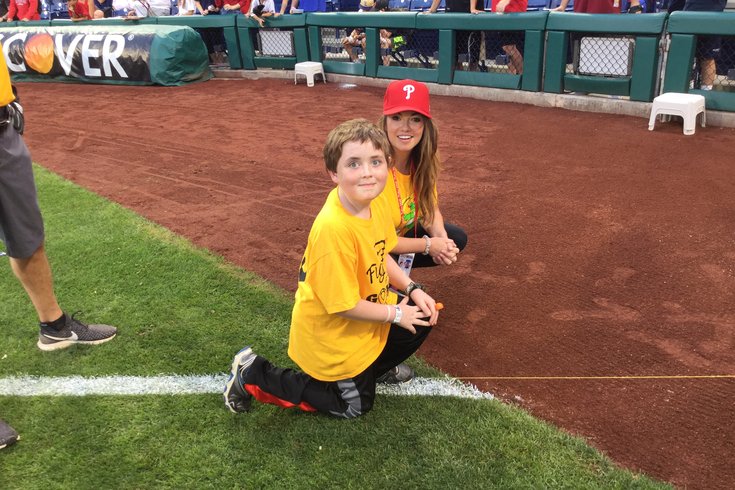 Natalie Egenolf and a special friend volunteered with the grounds crew this past weekend.

We feared it all year and tried to prevent it — but happened anyway. The injury tent in Atlanta on Sunday night might as well have been a nightclub that charged for entry. Some were comparing the night to the infamous “body bag game.” There have been conspiracy theories about the Falcons turf, the humidity in the dome, and naturally the lack of preseason play as the reason to blame for the extraordinary amount of injuries Sunday night.

Outside of the strangeness of Sunday night, I feel we should take some comfort in what we witnessed from Carson Wentz.

After taking shots to the ribs and spending five minutes in the tent going through concussion protocol, the second half reminded me of 2017 Carson, a QB who is willing to sacrifice his body to extend the play. We had been told this wouldn’t be the case and that he would be more conservative, but clearly, this is Carson’s instinct kicking in during high pressure situations. He’s like a dog with his bone, doing everything in his power to protect the ball at all costs.

His ability to avoid sacks and get the ball out is what makes Carson special. There has been harsh criticism for his performance Sunday but despite throwing the playbook out the window and relying on back ups, it took some time and adjustments and the Eagles only lost by four.

Let’s be honest, sometimes there is just no answer for Julio Jones running at 20 mph into the end zone. I expect to see a sharper Wentz on Sunday against Detroit and that Doug will be prepared this time to expect the unexpected.

One thing is for sure though, as long as he’s in the game Carson will do everything in his power to make sure his job is complete. He was a warrior Sunday night and we should take some solace in knowing that’s part of who he is.

One of the most overlooked and perhaps underrated parts of a baseball game is also the most obvious and important part of the game of baseball itself: the diamond.

What most people gleam over is the work (and science) that goes behind maintaining the pristine appearance of the physical heart of America’s past time. After the great blow torch incident of 2018, I’ve always been intrigued by what goes into the day in the life of a grounds crew member. One day you’re fighting a wind storm to lay down a tarp, the next, you’re surprised by an unpredicted mid-day mini monsoon and blow torching around 2nd base.

So when the opportunity arose to join the Phillies grounds crew for an evening, I jumped at the chance.

Upon my arrival I met Mike Boekholder, the head of the Phillies grounds crew for over 15 years. Mike started in baseball diamond maintenance at 16 years old. His career eventually led him to South Philadelphia where he is in charge of ensuring the field is in top playing condition every single day. Mike gave me a brief tutorial on the “dirt” (actually not dirt, but a mixture of fancy rock stuff that is specifically blended for baseball diamonds) and the grass.

There are few physical requirements for the job other than being able to lift about 50 pounds. The grounds crew is made up of two teams, the full-time crew and the game-day crew. Most full timers have backgrounds in turf science while the game-day crew is part-time and come from all walks of life and myriad of careers. In order to be a game-day grounds crew member, all you have to do is apply.

The night of my duties happened to coincide with Childhood Cancer Awareness night in partnership with Nemours Alfred I. duPont Hospital for Children. In addition to me, the grounds crew would be hosting childhood cancer survivors. I had the honor of tagging along with 10 year old Jack Frazier from Delaware for my first duties. After a brief pregame hang out in the facilities room with the crew, Jack and I were off for our first job chalking the foul lines down the field. We helped sweep the bases, pushed the fence over and did a ton of other fun stuff including filling the “P” on the mound.

Jack’s mother Michele Frazier informed me he was diagnosed with Acutle Lymphoblastic Leukemia (ALL) on December 7, 2016, the only symptoms appearing three days prior which included a fever, pain and trouble breathing. The family had just relocated to the Delaware Valley after Jack’s father was stationed in Turkey for four years. Jack was positive for the Philadelphia chromosome which made the ALL extremely aggressive and high risk.

Throughout his journey, Jack had 23 admissions for chemotherapy in 17 months, 20 lumbar punctures to inject a triple dose of chemotherapy medications into his spinal fluid to protect his brain and spinal cord, six non-scheduled admissions, and many clinical days for blood draws, outpatient chemotherapy, and other procedures. He also underwent several days of radiation therapy during 2018. Finally, Jack ended his IV chemotherapy in July 2019 and finished taking oral chemotherapy in August 2019.

As I stood next to Jack during our “work” the bright eyed little boy smiled and took every bit of his duties seriously. He told me he’d be 11 on November 13th, his passion for playing outside and exploring, his love for lizards (including his displeasure of the Philadelphia area not having many lizards), and introduced me to his emotional support lemur named Leroy. Jack has been the Leukemia and Lymphoma Society’s Boy of the Year for Southern Delaware for their fundraising campaign for the past two two years and for his 10th birthday in 2018 he went on in Make-a-Wish to Disney and continues on his mission to share his story with the world.

Michele describes her son as amazing; flirting with the staff, being a prankster and “an optimist who always finds a silver lining in any situation.” After my short time with Jack, I could see this in him too. Despite being cancer free, Jack’s journey is not over, two thirds of all pediatric cancer patients that survive their cancer go on to have lifelong problems or develop a different type of cancer related to the chemotherapy. They will have to worry about the long term effects of the medications that saved his life.

When I said goodbye to Jack after our grounds crew duties were over, Jack kissed me on the hand and told me “it’s a sign of respect in Turkey.” I signed up for the day in the life of a grounds crew member, but what I got was so much more, including a recalibrated perspective on life.

For more information on Alfred I. duPoit Hospital for Children in Wilmington, Delaware, the official Children’s Hospital of the Phillies, visit www.nemours.org.