And that's not the only change coming to Philly's gameday attire this season... 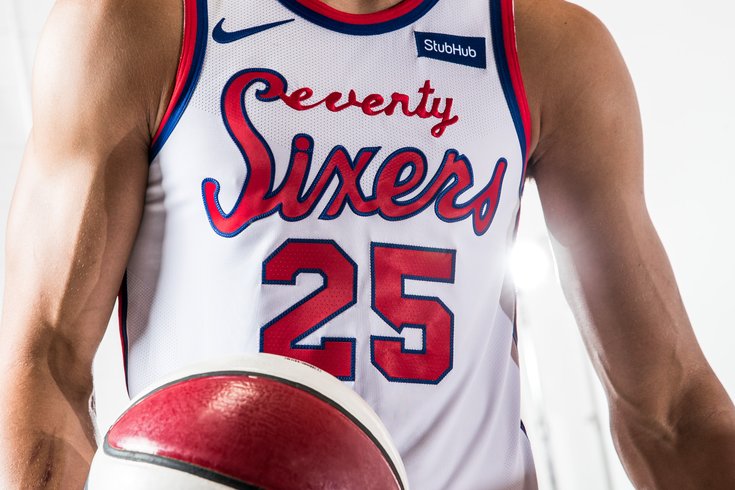 A first-look at the Sixers' new Classic Edition jersey, which will debut during the 2019 season.

The Sixers have had some really great uniforms over the years — and they've also had some pretty terrible ones. Lately, with their storied history having a much more visible presence in their on-court appearance and special edition jerseys allowing them to explore even more of their roots, the Sixers uniforms have had one of the best looks in the NBA.

And they're about to get even better, as the team is once again tapping into its past for an update on a classic look that was far too short-lived in the first place.

On Thursday, the Sixers unveiled their new Classic Edition uniform, which is closely based on what the team wore for half a season back in 1970-71. 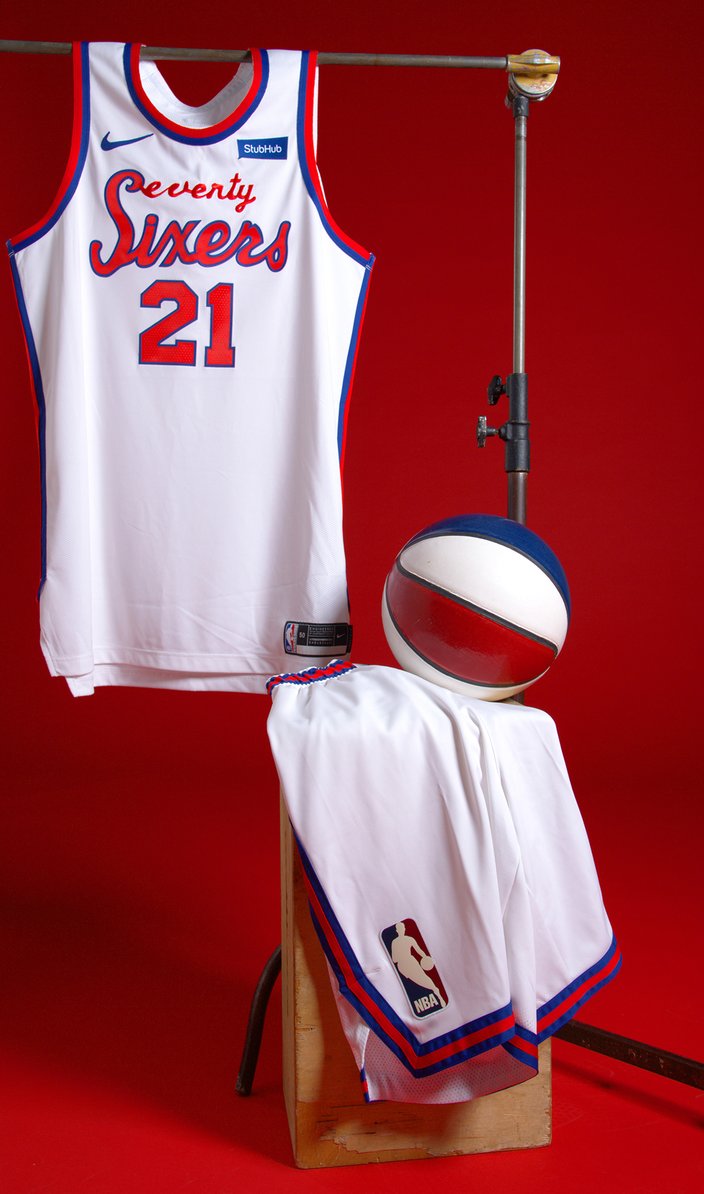 Here's a look at what the original jerseys looked like back in 1971, when Dr. Jack Ramsay was the Sixers coach and Billy Cunningham was winning All-NBA First Team honors for the third-straight year. The main difference appears to be a wider red trim around the sleeves, but otherwise they're pretty close to identical.

The Sixers will be one of 12 teams wearing a throwback uniform this season, something the NBA allows a team to do once every five seasons. The last time the Sixers unveiled a historical uniform, it was the blue jersey with PHILA across the chest — and that essentially became their main jersey logo shortly thereafter.

So why this uniform, which despite its stunningly good looks is likely one of the lesser known in team history, given that they only wore it for half a season?

"We thought it was really cool and fun and timely, where we could honor the past — and particularly Billy Cunningham," Sixers President Chris Heck told PhillyVoice. "He's obviously a legend in Philadelphia, not only being a world-champion player, but also a world-champion coach and a Hall of Famer who has his own statue and his number retired with us at the Sixers. So it was a nice opportunity to give a tip of the hat to Billy C."

And, as appears to be the case with all the Sixers uniform and branding decisions recently, the idea behind bringing back this specific jersey was years in the making, dating back to when the Sixers were first moving into their new training complex in Camden back in 2016.

"The season that Billy wore this uniform in '70-71 was actually the season he won All-NBA First Team honors. And I think because people might be less familiar with it, it's actually more fun to get to tell that story and share that part of our history," said Katie O'Reilly, Chief Marketing Officer of the Sixers. "For us, that's all about what we do. Everything we do when it comes to our brand and our strategy is about bringing to life that history and getting to tell those stories, but in a way that maybe connects with our fans of today in a modern way. And frankly, we think the uniform is really cool.

"That was definitely part of it while we were going through the whole 76ers Legends Walk — Chris mentioned that Billy has a sculpture — while we were going through that process and really picking the moments and poses that we would replicate and create for these sculptures, we went on a whole history lesson of ourselves and got to see all these uniforms. And it was really during that when we saw this [jersey] and were like, 'Well, that's amazing. What's that all about?' Then we got to read all the history, so being able to tell those stories, it's pretty fun."

Obviously, the team is hoping that the new (old?) jersey will resonate with the fans, but they're not the ones who will have to wear it on the court. But don't worry, the players were consulted first.

"We always get their opinions," Heck said. "So that has been a really good open dialogue with our players throughout the last half-dozen years and getting them excited about it, because we want them to be fired up about the way they look and feel and the environment they're in, as much as we want it for our fans."

The players weren't just consulted on the look, however, they'll also play a pivotal role in the way the team unveils their Classic Edition jerseys.

"To have them involved in the design process is really fun, and then the way we will launch these and unveil them allows us to also tell the stories of them — you know, to humanize them and do things within their interests," O'Reilly added. "You'll see part of the campaign, we shot Ben [Simmons] with a vintage 1970s car, which allows us to tell a story. We literally saw an ad with Wilt Chamberlain from the '70s in front of a car, and Ben happens to be a big car junkie — so it's a really fun opportunity for us to be able to capitalize on a bunch of things, telling his story while showing the history. It's great." 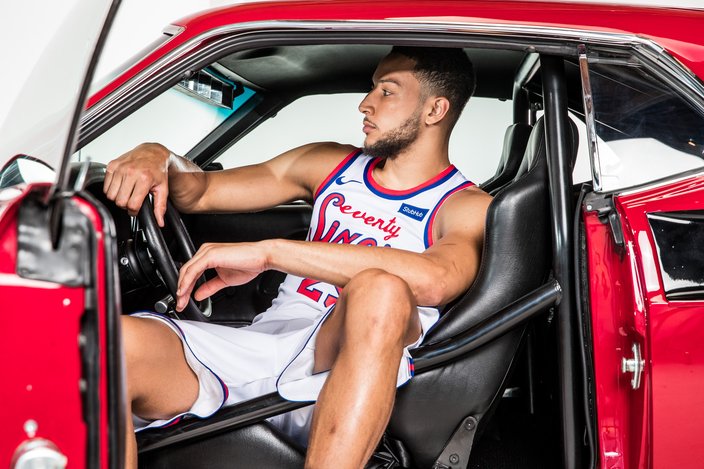 The Classic edition will be one of five uniforms worn by the Sixers this season. The others include the Icon (standard blue), the Association (standard white), the Statement (red w/ Sixers on chest), and the City Edition (gray w/ stars).

Noticeably missing from that group is the Earned Edition uniform, the all-white version of the City Edition that the team first wore on Christmas Day last year. That branding will still be visible in some way, but it won't be a separate jersey.

"The Earned Edition is not going away [entirely]," O'Reilly said. "Nike and the NBA will continue to have this Earned Edition for playoff teams — the teams that 'earned' the right to wear it. In the past, it was a uniform, but they changed the program a bit this year, so it will be a piece of on-court gear. It won't be an actual uniform."

But these aren't the only changes to the Sixers' on-court appearance in store this year. Here's more from O'Reilly on what's to come...

"Additionally, a couple other things — the City Edition this year will also be different. So we have the opportunity every season to change our City Edition, which is really fun. That will be unveiled later in the year, around late October or early November. And then finally, and this probably speaks to why we chose this uniform, our Statement Edition is going to be a little different this year. In the past, it had 'Sixers' in script, but this season it will say 'Phila.' So having our Classic Edition spell out the Seventy Sixers allows us to still have that sort of in our portfolio."

That change to the Statement Edition sure sounds a lot (but not entirely) like the photos that leaked a few weeks ago. Of course, that would also mean an entire color change (from red to blue) as well, so we'll have to wait and see.

What we won't have to wait very long to see is the new Classic Editions. While the start of the season is still several months away, it sounds like we'll be seeing these throwbacks quite a bit in 2019-2020 — and possibly as early as the opener.

"We think that the fans are going to like it a lot, as well as the players, so we're going to push the envelope and wear it maybe more than the norm," Heck added. "You'll see it quite often, right from the beginning."

Oh, and in case you're wondering, Classic Edition jerseys will go on sale on Oct. 1 on SixersShop.com and at in-arena stores.

[Here's one last picture of the new uniform, in which you can see a little more detail that's not visible in the above photos, like the liberty bell logo on the waistband...] 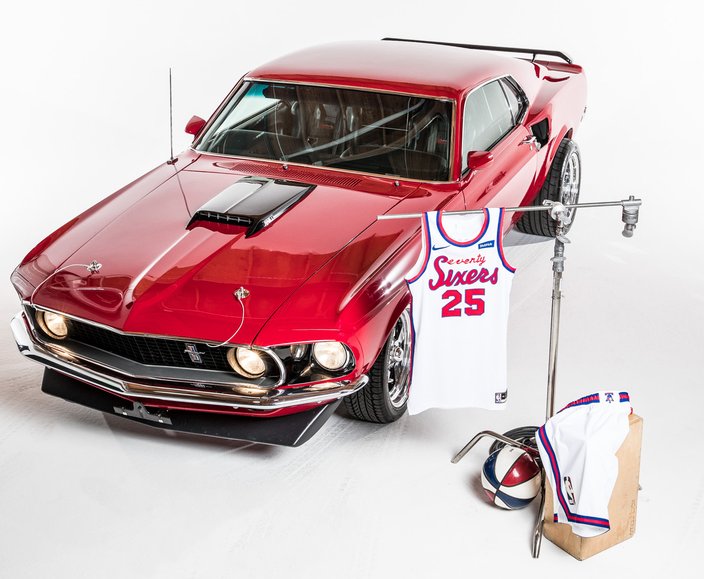 A look at the Sixers' new Classic Edition uniforms for the 2019 season.