T.J. McConnell thanks Sixers fans in goodbye message: 'I love all of you very much' 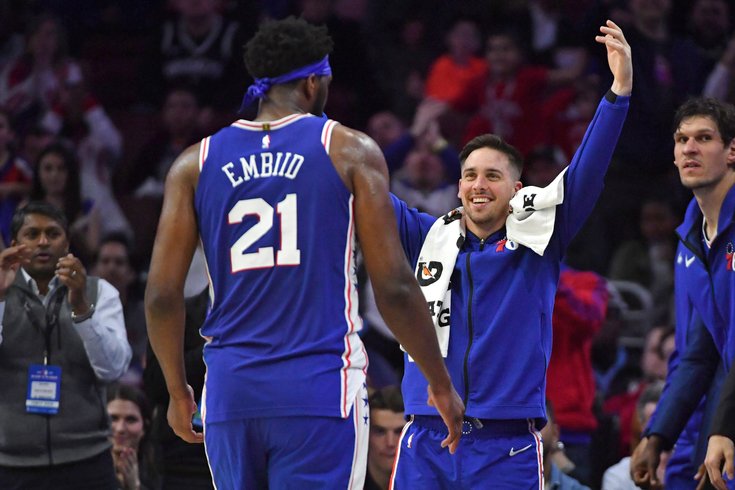 T.J. McConnell embraced Sixers fans, and his marginal role on the team, for four years. As he leaves, McConnell told Sixers fans that he will never forget his time in Philly.

T.J. McConnell scored just over 2,000 points in his oddly endearing four-year stint with the Sixers, but to hear some fans tell it, he was just as big a part of The Process as Joel Embiid.

Now McConnell has moved on, signing a two-year deal with the Indiana Pacers, and fans are dealing with the remnants of those emotions. McConnell knows the effect he had on the city and its sports fans, so he took to Instagram on Wednesday morning to send one last message to Sixers fans everywhere.

McConnell says the day he made the team was one of the best days of his life; he says he met some of his best friends for life during his time in Philly; and he says he'll "never forget (his) time in the city of brotherly love." It's pretty good stuff.

PHILLY PHILLY. Man where do I even begin? I can’t put into words how much this city means to me. Four years ago I came into training camp unsure of what to think. I knew there was a lot of competition but was confident I could snag a roster spot. The day I made the team was one of the best days of my life. This city quickly adopted me and accepted me for who I was. The gritty boy from Pittsburgh. I have had so many memories here. I’ve been here from the start of the process and saw this team develop to what it is today. Being there from the start through two great playoff runs has been one of my greatest blessings. I have met some of my best friends for life here and I will forever be grateful. I will never forget my time in the city of brotherly love. The warmth you have showed my family and I is truly amazing. I love all of you very much. THANK YOU. I want to especially thank the whole @sixers organization for everything you’ve done for my family and I. You have become a second family to me. I cherish each and every one of you and the relationships we have formed. THANK YOU. I also want to thank @michaelschulson @daviddodge @tatwatches @76ersixthman for your hospitality and taking care of us. It is much appreciated.

McConnell, of course, will be remembered best as a pesky, undersized guard who did little things that coaches and "real basketball fans" love: diving for loose balls, forcing turnovers off inbounds passes, and generally knowing his role.

He'll also be remembered for this game-winning shot over Carmelo Anthony, an impossible moment as the team was starting to figure out what it could be:

Don't be surprised if McConnell returns to Philadelphia when his playing days are over and adopts a broadcaster/sports personality role in a city that will likely always love him.