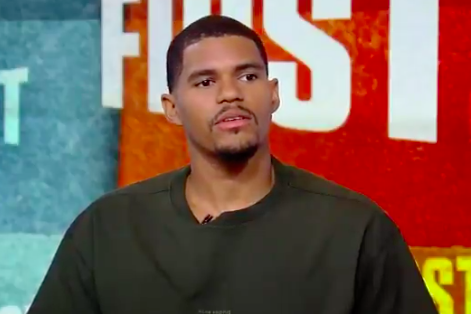 The Philadelphia 76ers spent the most money in the NBA during the month of July, handing out two max contracts to Tobias Harris and Ben Simmons, adding Al Horford and rounding out the team's supporting cast.

That kind of investment comes with high expectations heading into next season. Two of the team's central pieces, Harris and Simmons, will be counted upon to elevate their games on the offensive side of the ball.

RELATED: What will Sixers' rotation look like to start next season? A way too early look

Harris joined the panel of FS1's "First Things First" on Monday to talk about the Sixers with hosts Chris Carter, Nick Wright and Jenna Wolfe. The discussion naturally turned to the question marks surrounding Philly's young stars. Can Joel Embiid stay in shape and maintain his health? Can Simmons develop a game-ready jump shot?

Working with Simmons in Los Angeles this summer, Harris said Simmons is clearly gaining confidence in his shot. We've seen some of that in the brief highlight videos posted this month from gym scrimmages, but it means a bit more coming from a teammate Harris.

"You're always on my mans jump shot, but I was with him in the gym in LA, and he's shooting the ball. He's confident with it. He's working."

"He's working," Harris said of Simmons. "He's working his tail off every single day, getting better."

"At that time, like last year, for him, he just wasn't confident in shooting it," Harris said. "But still super productive. He's like a deer in the front court of just running and getting out in transition, can get to the rim at will, stronger, can post up, etcetera. For him to add that element now, where teams have to defend that and guard that, and just know that he's going to be able to shoot, improves us as a whole group."

Every indication is that Simmons has taken his offseason training seriously. Watching how his game evolves and how the team's offense opens up will be one of the most compelling facets of the upcoming season.