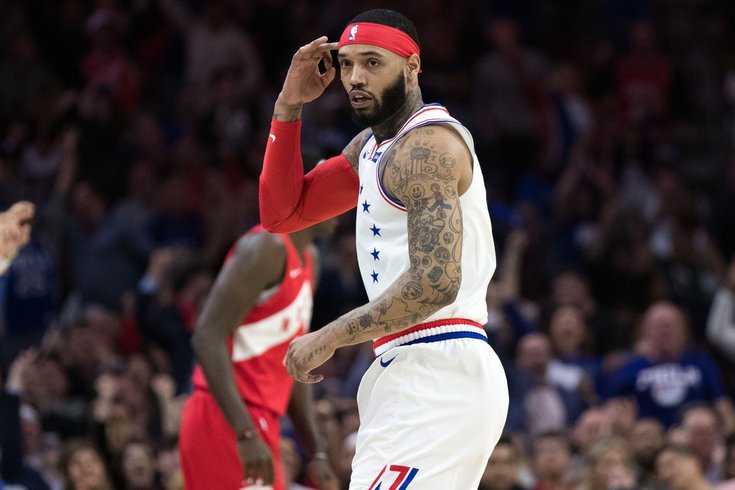 As a new Sixers season begins, Mike Scott had some things to clear up about his offseason before things could really get started. It’s not all that often you see a member of a local team fight a group of Eagles fans to kick off football season, and Scott did not back down from questions about the scuffle at Philadelphia’s media day.

In fact, he gave us the most detailed account we’ve heard from that day yet.

“Looking back on it, I always play devil's advocate with myself, [I] definitely should have walked away before it got to that point. I’m the professional, I got to be the bigger person and walk away,” Scott said. “But you know, once you keep going, he was popping hella sh*t, he was going off, maybe it was the microphone. I walked up in there, and once you take it to that next level and you start throwing other slurs out there, now I got to see if you match that energy.”

“That’s what happened. [I] definitely got to be the bigger person, it should have never gotten to that point. Definitely should have walked away, but I didn’t, and he was talking crazy and took it to that next level. So I had to see if he matched that energy.”

Scott was clear the incident has had no impact on his relationship with Philadelphia fans or his willingness to interact with them, and that he saw it as just a case of a few people getting out of hand at a tailgate. He even went so far as to joke about fearing for his safety based on how the game went that day, reflecting on Washington heading into halftime of Week 1 with a 20-7 lead over the Eagles.

“Redskins go up 20-7 and I’m looking around, I’m like, 'Aw sh*t, Eagles come on, help me out now, I can’t fight the whole stadium,” Scott said. “They win that game, sh*t, they would have been out there waiting for me with pitchforks.”

It’s really not all that difficult to understand why Scott has won Philadelphians over if you pay attention. Though the Eagles game incident is one he and all parties involve seem to regret, he has embraced the average citizen of Philadelphia in a way that is fairly unique for a professional athlete. Another guy might autograph a ball for you at an event, while Scott could show up at a Popeye’s to try the new chicken sandwich with you.

It doesn’t hurt that he has a very matter-of-fact way of speaking and he handles his business on the basketball court the same way, which has endeared him to a fanbase that recognizes B.S. when they see it. For instance, this was Scott’s response to hitting one of the biggest shots in the team’s recent history:

“Jo made a hell of a hustle play, found me in the corner, cashed out.” —Mike Scott

And this is the now infamous response he had to getting involved in a late-season scuffle:

Mike Scott on stepping into the Bledsoe situation: “That’s how I am. I ain’t no bitch.”

While his off-court happenings have been the talk of the town, Scott told reporters at media day that he put plenty of work in on the court to get ready for this season. While he’ll continue to be a needed shooter for the Sixers off of the bench, Scott also expects to exploit some more mismatches with his size this season, potentially taking guys down to the low post as he did during his college days at Virginia.

And if this whole basketball thing doesn’t work out, he has a firm enough grasp of Philadelphia to figure out a Plan B.

“It’s Philly,” Scott joked about the fight. “We had a brawl before noon and then went and enjoyed the football game. What a day.”