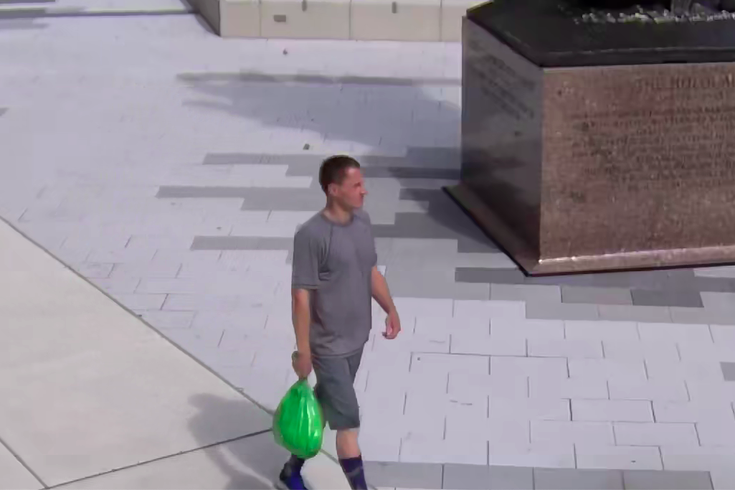 The Philadelphia Holocaust Remembrance Foundation shared surveillance footage of the man who allegedly vandalized a memorial with anti-Semitic imagery on June 16, 2019.

More than a month after a hate-fueled vandal was captured on film etching Nazi symbols into pillars at Philadelphia’s Horwitz-Wasserman Holocaust Memorial Plaza, a warrant has been issued for his arrest.

That update came Tuesday afternoon from the Philadelphia Holocaust Remembrance Foundation, the non-profit organization which late last year completed development of the plaza near 16th Street along the Benjamin Franklin Parkway.

Word of the shocking vandalism – including the initials “RBM” and SS bolts carved into three of the plaza’s six pillars – came out about two weeks after it had occurred, in an internal Philadelphia Police Detective Bureau patrol alert.

Describing the alleged suspect as a middle-aged white man wearing gray shorts, a gray T-shirt and blue sneakers who carried a green plastic bag, police considered the suspect to be “armed and dangerous.”

Eszter Kutas, executive director of the Philadelphia Holocaust Remembrance Foundation, extended the organization's “sincere appreciation” to law-enforcement agencies for not only working to identify the suspect, but ensure that the Holocaust Memorial Plaza "remained a safe environment for learning and reflection.”

She noted the pillars were repaired after the Father's Day vandalism.

“We are also tremendously grateful to our supporters and our city’s residents who rallied to support the Holocaust Memorial Plaza, and by extension, the imperative of ‘Never Forget,’” Kutas said. “While we have been saddened to see that such bigoted acts of vandalism could occur in Philadelphia, we are proud of our city’s collective response to this incident."

A Philadelphia Police Department spokesman was unable to provide any additional information about the foundation's announcement regarding the warrant or the suspect's identity. Any subsequent updates will be added to this story when they're made available.