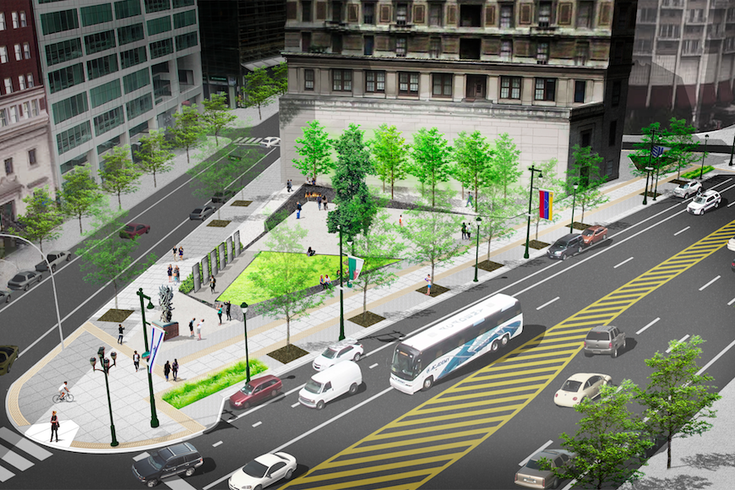 A rendering shows the proposed design of the new Philadelphia Holocaust Memorial Plaza.

It has been more than two years since Philadelphia Mayor Jim Kenney unveiled plans for a Holocaust memorial on Benjamin Franklin Parkway. After less than a year of construction, the memorial will officially open Monday, Oct. 22.

The Philadelphia Holocaust Memorial Plaza will sit at a triangle of land at 16th and Arch streets. Though originally estimated to be a $7 million project, the end result was closer to $9 million, thanks to a higher influx of donations from both state and city sources than had been anticipated, Billy Penn reported. Construction on the project took about eight months.

That parcel of land has long been home to the Monument to Six Million Jewish Martyrs, which was installed there in 1964 to honor Holocaust victims. The monument was the first free, public dedication to the Holocaust in the United States.

The final plaza design is very similar to what originally was planned in the 2016 renderings for the space. The memorial includes six pillars, representing the six million Jewish people who died during the Holocaust, and will include an eternal flame of remembrance and original train tracks from the Treblinka concentration camp, which sat near the Warsaw-Bialystock railway line.

Other features include a tree grove, to represent the woodlands that sheltered those resisting the Nazi regime. There is also a Theresienstadt Camp tree, in honor of a sapling nurtured by prisoners who wouldn't live to see the tree flourish.

The new plaza is free and open to the public. The Philadelphia Holocaust Remembrance Foundation also produced an app that serves as a tour guide through the plaza that could be particularly helpful for educational trips. It includes testimonials from Holocaust survivors and witnesses.