Boban Marjanovic signs with Dallas Mavericks, everyone mourns the end of Tobi & Bobi

True love never dies, but the NBA's best friends will be apart for the first time since 2015-16 season 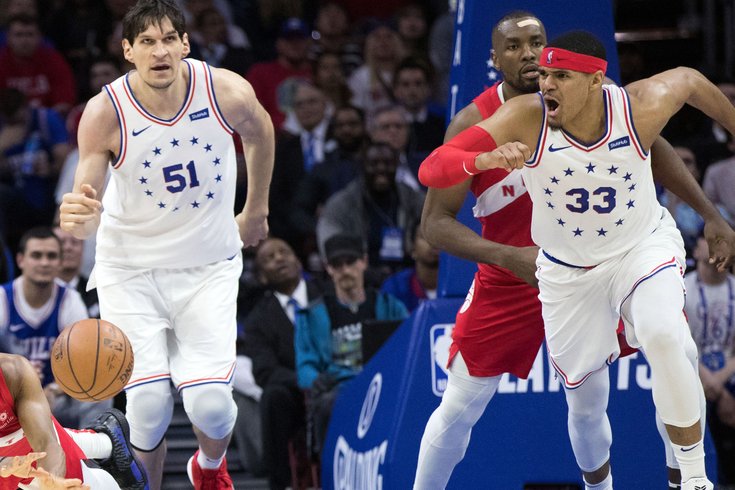 The latest blip in the wilderness of NBA free agency came Wednesday, when former Sixers center Boban Marjanovic signed a two year, $7 million deal with the Dallas Mavericks, according to The Athletic's Shams Charania.

The deal is itself is relatively minor, both in Sixers land and at large. No one was under the illusion that Marjanovic would return, and the nearly-31-year-old backup center doesn't really dominate games.

The signing is very important, however, to those who follow the NBA's friendships. Marjanovic and recently-signed Sixers star Tobias Harris are quite possibly the league's best pair of best friends. They danced together. They hung out together. They made cheesesteaks together. And their respective NBA careers saw them play alongside each other, improbably, on three different teams over the last three years.

It was kind of insane! The odds of two wildly different players following each other through three different stops are very long. As two of the seemingly nicest dudes in the league, their friendship is refreshing, and it was fun to have it stop in Philadelphia for a few months.

But the Tobi and Bobi on-court partnership has finally reached the end of its rope. Understandably, people are emotional.

Harris, for his part, tweeted through his feelings:

Marjanovic offered some comedic relief, as he does:

You know what they say....EVERYTHING is bigger in Texas. @dallasmavs

Dear Bobi @BobanMarjanovic, I feel like I can call you Bobi because you and me are so alike. Your time in Philly was far too short, but I'll never forget the joy that you brought to us. Maybe we can play a game of HORSE when you come back to town? I'll miss you.
Your pal,
Brian pic.twitter.com/xsFhok3cyy

And the curtain closes on the Bobi and Tobi show. https://t.co/KyJOojvEpZ

Bobi and Tobi is gone.

This is a dark day. pic.twitter.com/TbB4QWwl8c

Will the NBA look into the Mavs for violating the CBA by breaking up Tobi and Bobi? Not a lot of people know it's written into league policy that they have to be on the same team.

Heartbreak doesn’t accurately describe how sad I am about Tobi & Bobi being split up https://t.co/6OXa5uDWbm

We'll miss you, Bobi, and we'll miss the magic of Tobi and Bobi, even as the relationship presumably lives on. It was a wild ride.