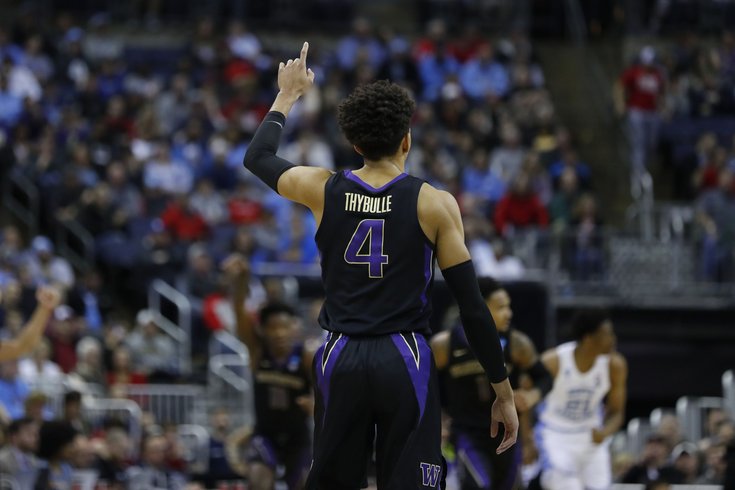 Could Washington Huskies guard Matisse Thybulle be the Sixers' pick at 24th overall?

It may not seem like the NBA Draft is as close as it is, but we are only about a week-and-a-half away from an event that could change the futures of 30 different NBA teams. Zion Williamson is the draft's crown jewel and teams at the top have a lot more at stake, but as we've seen with the Golden State Warriors in the 2019 NBA Finals, there is a cost to missing on picks on the other end of the draft spectrum, too.

For the first time in years, the Sixers are far outside of the lottery (for now) heading into draft night, which means the possibilities are basically endless for their picks. They own pick No. 24 in the first round, along with four picks in the second round, including a pair of valuable selections (No. 33 and 34) near the top of the second.

Today, we'll focus on who the Sixers are being tied to in the first round, as the second round will largely be informed by the players who fall and what they do with No. 24. Here's an assortment of intel from draft experts around the internet.

The Sixers are flush with creators and scoring at every position, but they could stand to add some defensive versatility on the wing. A player such as Thybulle, arguably the best perimeter defender in college basketball, could fit well, especially since he is a willing ball mover who will have no issue deferring to the team's plethora of stars.

Add the fact that he is a senior -- and thus more in line with the Sixers' timetable -- and he makes a lot of sense. [ESPN]

Thybulle is the sort of player the Sixers have needed for years, and had he shot better from three during his senior season at Washington, there would be more people clamoring for him in Philadelphia. But after solid shooting numbers during his first three college seasons, Thybulle dipped to 30.5 percent from beyond the arc in 2018-19, and he hasn't been a high volume free throw guy at any point during his college career, so his offensive success may be heavily predicated on whether he can knock down shots.

The defensive profile is tremendous though — Thybulle averaged over five combined steals & blocks per game this past season, and numbers like those are normally a good omen for defensive impact and ability to leverage your athleticism at the next level. Thybulle is an excellent candidate for the Sixers.

Here's where the Thybulle connection gets interesting. The Washington product pulled out of the combine in mid-May, with rumors swirling that he'd received a promise from a team that prompted him to do so. Vecenie believes Philadelphia could be the team that got in his ear.

I’ve done some process of elimination asking around that would seem to take a few teams off the board there (I haven’t confirmed them necessarily though, so I’m going to refrain from listing them here). But I haven’t heard much about Philadelphia being a team that has been eliminated from the potential promise list. Additionally, with picks 33 and 34, it’s easy for Philadelphia to mask the promise by bringing in players who could be in the mix at No. 24, as those same players could potentially be in the mix at No. 33.

He also fits extremely well with Philadelphia as long as you believe in him becoming a good shooter. I question that a little bit, as he shoots something of a hard ball despite his percentages being solid. This would be a bit of a reach for me, but I get why Philadelphia would go for it as they try to fill out their roster around the star power.  [TheAthletic]

The volume of picks owned by Philadelphia has indeed made it difficult to get a read on what they plan to do, and it's worth noting when a couple of the top draft guys are pointing in the same direction at once.

Dort became just the third consensus top-50 high school prospect to enroll at Arizona State -- joining a list that includes James Harden and Jahii Carson -- and he was a big reason why the Sun Devils made the NCAA Tournament for the second straight year under Bobby Hurley. The 6-4 freshman from Montreal averaged 16.1 points and got to the free-throw line 6.1 times per game.

He has a 6-9 wingspan and real desire to guard both quicker and bigger players. His 222-pound frame is rock-solid. And although Dort is not a natural point guard, he did spend part of this season proving he can play on or off the ball, which helped him with scouts.  [CBS Sports]

The Sixers have been tracking Dort since he was in high-school, and the former soccer goalkeeper is a tremendous athlete who might help Philadelphia solve some of their on-ball defense problems. As with Thybulle, it's his shot that people question — he managed to hit just 30.7 percent of his shots from deep at Arizona State, and the Sixers can hardly afford to add more non-shooters to the lineup around their core.

The Ringer doesn't do write-ups in the same style the rest of this group does, so I'm boiling down their scouting report into some easy-to-consume points about Johnson's game:

Strengths: Good spot-up shooter with a compact form and good footwork. He has the body control to balance himself midair to hit shots off movement. Uses screens and relocates at an NBA level. If he masters his off-screen shooting, he could become a tough cover due to his size. Runs the floor hard in transition. He’s a leak-out threat who will benefit from NBA pace.

Weaknesses: Unable to create much off the dribble. Average athlete with a slow first step; he takes short, choppy steps on drives. His shot also isn’t quite as accurate off the dribble. Subpar at-rim finisher against length, and he rarely draws fouls. Despite his height, he’s also not a post threat. Improved perimeter defender following his hip procedure but he’s still stiff moving laterally, and struggles to contain scorers who change directions quickly. Lacks ideal strength to be an effective defender on switches against larger players. He’s also not a great rebounder for his size.  [The Ringer]

He may not be able to do a lot of other things, but Johnson will likely be able to shoot. As we saw with Landry Shamet last season, if you can do that at a high level with this core, you're going to get on the floor early and often. The logic doesn't need to be a heck of a lot more complicated than that.

If he manages to be even an average defender, which is possible with his size, he would be able to help the Sixers plenty.

Williams may have lost some supporters at the combine when he struggled to make shots against second-round prospects during scrimmages. However, one team is bound to be sold on his intangibles, skill level from the post as a scorer or passer and excellent defensive instincts.  [Bleacher Report]

For those of you who have read up on Grant Williams — you should have done that over the weekend, but get hip now if you didn't — you'll know the case for him is a little tougher to make than it will be for some of these other prospects linked to the Sixers. The fit is not super clean, his path forward is a little muddier than some of his peers, you get the idea.

But he is one of the smartest, most productive players in the class and he's young for a player leaving as a junior at just 20 years old.

At this point, Johnson looks one of the more NBA-ready wings available, with a potentially elite catch and shoot profile that makes him a good first-round bet despite his advanced age and history of leg injuries. He’ll only be average defensively, but his touch and mechanics are for real, and Johnson will have to be accounted for on the floor at all times. A playoff team like the Sixers might be able to use him immediately as a plug-and-play floor spacer.  [Sports Illustrated]

Here's what I would say about a guy like Johnson — as long as he shoots, he's going to be a helpful player on this Sixers team no matter what happens with their free agents this summer. A guy who can run the floor and space it for Ben Simmons and Joel Embiid will be valuable in almost any team context.

That being said, a Johnson type gets less valuable if the Sixers lose some of their creation ability this summer. As we saw with Robert Covington in last year's playoffs, teams can take you out of a series on offense if you're not a threat to take them off of the dribble. Will Johnson have enough shake to be a reasonable multi-level threat? That remains to be seen.