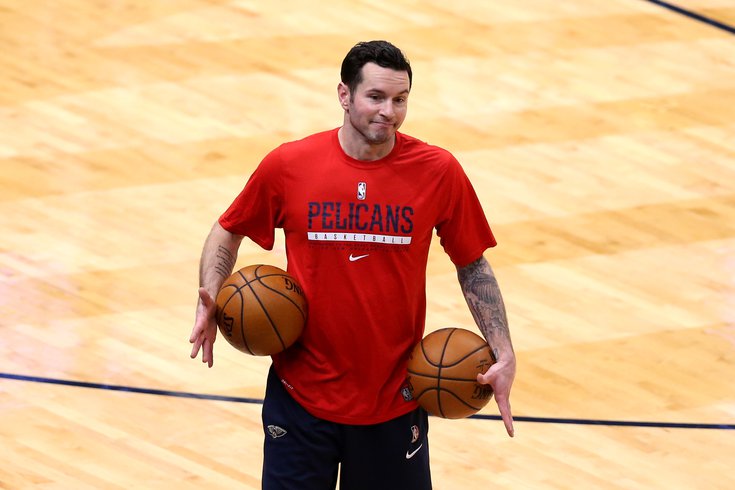 New Orleans Pelicans guard JJ Redick before their game against the Washington Wizards.

The Sixers are among a small group of teams who have expressed interest in acquiring sharpshooter JJ Redick, according to a new report from Shams Charania of The Athletic. The Celtics and Nets are reportedly the other teams being approached by New Orleans about a deal.

There is plenty of familiarity between the parties involved here, to say the least. Redick had arguably the most successful run of his career playing for Philadelphia from 2017 through 2019, serving as the fifth starter in the star-studded lineup that pushed the eventual champion Raptors to seven games in the 2019 playoffs.

Redick's chemistry with Joel Embiid was something the franchise center openly talked about missing last season, and Embiid expressed an interest in trying to recreate with Seth Curry after the Sixers added him in the offseason. There's obviously a good bit of appeal bringing back the man himself to boost the offense even more, reconnecting a duo who know how to play together instinctively.

The only other portion of his career as good or better than that run with Philly was his stint playing under Doc Rivers in Los Angeles. Redick's catch-and-shoot ability on the move was one of the many dangerous pieces of the "Lob City" offense powered by Chris Paul and Blake Griffin, and Redick's success under Rivers is partially why there was optimism that the new Sixers coach could get value out of guys like Shake Milton, Furkan Korkmaz, and even rookie Isaiah Joe upon arriving this offseason.

(Whether that connection is actually beneficial is another story. Those Clippers were a famously surly bunch, and while I'm sure they've all moved past it to some degree, there have been conflicting quotes and reports from all parties about the, for lack of a better word, vibes in L.A. Rivers claimed years back that Redick actually wanted to return to L.A. the year he arrived in Philly as a free agent, something Redick disputed on the record.)

The pivotal question is the same as it always is during trade season. What would it cost to get Redick in a Sixers uniform, and does it make sense to bring him back?

Something worth noting to kick off that thought exercise: Redick is having the worst year he has had in probably a decade, shooting terribly in a small role off of the bench for the Pelicans. While you would certainly expect his shooting numbers to normalize a bit, he's making under 30 percent of his threes, and as Sixers fans know well, he's not exactly a dynamic threat to attack the basket. Add on the defensive question marks he has as a 36-year-old deep into his career, and you're obviously expecting to bring him in as a bench weapon and not a key contributor like he was in the past.

Then there's the matter of making the numbers work. Redick is making over $13 million this season in the final year of his deal with the Pelicans, a number that takes some doing to match for Philly. If the Sixers were interested in sending Danny Green, for example, they could make a one-for-one swap with nothing else involved. But that sort of deal doesn't make any sense for Philly, given the defense and age gap between the two players, and Green's contract is basically their only path to making a major upgrade at some point this season without giving up one of their stars.

As a pure value proposition, it makes a bit of sense to combine a few bench guys with decent salary numbers (e.g. Mike Scott, Terrance Ferguson) into Redick, who could be a legit weapon off of the bench. But there are hang-ups there too — is it worth making that swap at the cost of a pick or two on top, for example? This is a team that doesn't lack for shooting depth anymore.

Even without considering the pick value, there's also the question of whether the resource outlay makes sense for this version of the Sixers. He's a shooter you can trust more than a lot of the guys on the roster, but Philadelphia's bench could get very small in a hurry if they make a move in this direction. Rivers has already lamented having to play Tobias Harris and Ben Simmons more minutes than he'd like due to Scott's injury absence, an effect that would be lasting if Scott was sent out in a deal and no other subsequent moves were made.

The Pelicans, according to a note from beat writer Will Guillory in the report from The Athletic, are likely trying to pick up another first-round pick for their troubles here. That sort of pick would probably be best used elsewhere for Philly, either to draft a cheap contributor or sweeten a package for a glossier target, rather than dealing it for Redick, especially when one of the rumored suitors (Brooklyn) has no realistic way to acquire Redick unless he's eventually bought out.

Is Redick more trustworthy in a big moment than, say, Furkan Korkmaz? Absolutely. But at this stage of Redick's career, that's the sort of player he's competing against for a role, and that's the sort of value you have to consider before wading into talks.