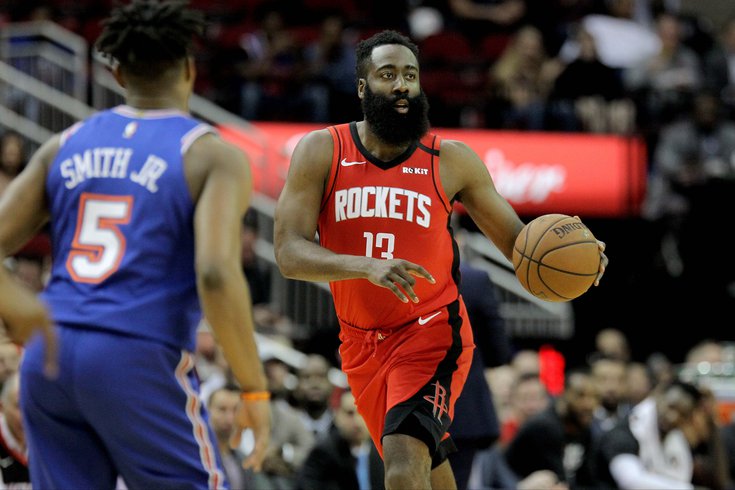 Is it a day that ends in the letter Y? That means another James Harden trade rumor is being dropped to disrupt your day, and for the second time this week, the Sixers are at the heart of it. Here's hoping you're not sick of the banter yet.

According to Marc Stein of the New York Times, Philadelphia has emerged (at least in the minds of "league sources") as the most likely destination for Rockets star guard James Harden, whose desire to get moved has been the No. 1 story of training camp to date.

As the NBA preseason begins tonight Philadelphia ranks as the most likely destination when the Rockets eventually reach the point of trading James Harden, league sources say

Though the Brooklyn Nets emerged as the clear-cut favorite in the early going, the word being that Harden wanted to reunite with Kevin Durant in New York City, a number of would-be contenders in the Eastern Conference made it onto his destination list this week, with Shams Charania reporting the Milwaukee Bucks and Miami Heat had earned the Harden seal of approval. Philadelphia emerging as the most likely choice in that group would be noteworthy if we assume the reporting holds up.

The other details, however, appear to cast doubt on that fact. As we have reported here repeatedly (and as Daryl Morey and Doc Rivers have said publicly), the Sixers have shown no interest in moving either of Joel Embiid or Ben Simmons in a deal for Harden, which is what many believe it will take to lure the Houston star to Philadelphia.

Stein doubled down on that belief Friday, though he notes there is more optimism about a deal getting done than many people believe.

That last bit is important because many around the league have been (and remain) convinced Tilman Fertitta does not want to deal Harden to Morey following his split with the Rockets this offseason, with some going so far as to say that the Sixers would have to give up more than other teams in order to get a deal done.

When you can only work with 29 total organizations to make trades, though, it's tough to do business by ruling one out altogether. The New Orleans Pelicans, for example, didn't want to give into Anthony Davis' demands and move him to the Lakers, but they ended up getting quite a bit in return for Davis when they eventually caved and sent him to L.A. Pettiness sounds appealing in theory to some people, it just often ends up being bad business.

In any scenario where the Sixers could obtain Harden without giving up Simmons or Embiid, they would almost immediately leap from "nice team" to a threat to win the title. It is hard to overstate how much juice he would give their offense upon arrival, particularly with Doc Rivers transitioning the team to a pick-and-roll heavy attack.

That trio would take time to gel and settle into roles, but there are terrific combinations all over the place. Harden would create easy buckets for Embiid, space the floor for both players, put more pressure on teams to stay out of foul trouble, and unleash Simmons as a short-roll attacker, something many have wanted to see from him for years. Embiid and Harden offer two distinct halfcourt weapons in a playoff series, players who can win in totally different styles in totally different matchups, a quality that most title contenders tend to have.

It's just hard to see a trade without one of those players being enough. With the Rockets in search of blue-chip players and/or assets, the Sixers have none to offer beyond their top duo. Tobias Harris may very well have a resurgence under Doc Rivers, but his contract makes him a present-day negative in a lot of trade talks, which would likely force the Sixers to add basically every young player and pick they have to get Houston to consider a deal. That's a deal worth making for Philly if they can get Houston to believe in it, because there's no substitute for star power, but it looks like a pipe dream from where we sit today.

The other big questions we haven't discussed around here are hard to answer — does Harden really want to be here long-term, and would the key players get along well enough to keep it all together? Wanting to join a potential contender is an easy thing to say that relies on far more variables in reality, especially when you consider Harden's track record of clashing with other players. Many of Houston's problems sprung up in spite of his blessing for the moves, so obtaining him is no guarantee he's going to be happy in Philly.

The personality factor is always one worth monitoring, though it's harder to predict from afar and even in the moment. During the early days of the Jimmy Butler season in Philly, for example, there were far more concerns about Butler getting along with Embiid than Simmons. But time rendered the rocky start moot, and Embiid and Butler would eventually grow fond of one another over time, with Simmons bristling at a change in role and personality differences with Butler. You can make best guesses and plan for/around this stuff, but it's a calculated risk just like any other component of team building.

This song and dance seems like it will go on for a while, with both sides insistent they're not caving. And though I differ from many fans in my stance on a Simmons for Harden swap, they're playing this the right way so far — Simmons is the best young player Houston can hope to get back for Harden by a good margin, and if Philadelphia ends up desperate to make a deal for the disgruntled star, that's a trump card they can choose to hold onto until it's absolutely necessary.

I'll see you in a couple more days when the next rumor is passed along.