Practice notes: Danny Green hopes to lead Sixers on and off the floor 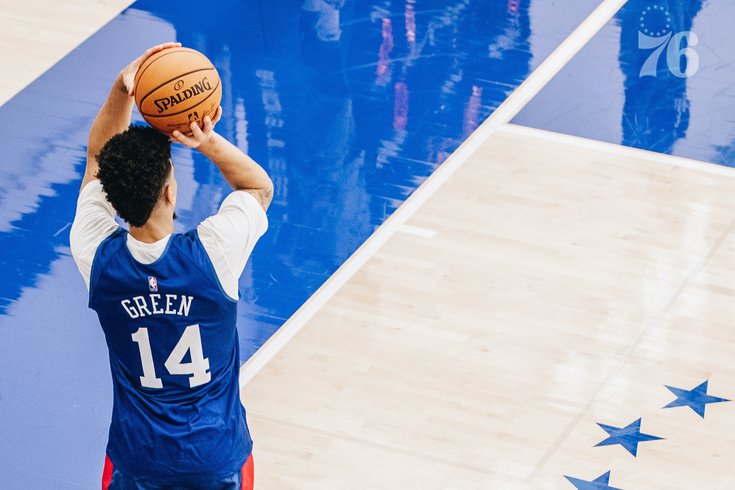 Danny Green pulls up from three during Sixers practice.

Danny Green, as he is happy to tell you himself, has lived a charmed life as an NBA player. Despite struggling during his first two years in the league, the San Antonio Spurs gave him a chance to stick, and it paid off, with Green having the good fortune to suit up for three championship teams with three different franchises, playing with all-time greats like Tim Duncan and LeBron James along the way. Not bad for the 46th pick of the 2009 draft and a guy who briefly took his talents to Slovenia during the 2011 NBA lockout.

His good fortune, thankfully, has not eroded his sense of humor along the way, with Green noting sarcastically on Wednesday that if things go south for Philly this year, he's not responsible for the mess.

"I'm glad that they wanted me, I hope I live up to expectations, but also the pressure is on them," Green said with a laugh. "I won back to back. It's their job to get me there to win another one. If they don't, they f**ked it up."

The Sixers did not deal for Green for the jokes. But his ability to make winning seem routine as a player and person (and thus the topic of jokes) was certainly a big part of the appeal on Philadelphia's end.

While Sixers fans have grown excited about the upside of some of their young pieces off of the bench, from Matisse Thybulle to Shake Milton to Tyrese Maxey, it is Green who arrives with a surefire role and what is likely to be a firm spot in the starting lineup. Doc Rivers joked with reporters Tuesday that since the assumed group of Curry-Green-Simmons-Harris-Embiid had already been sussed out, maybe we should be the people collecting checks to coach the team.

It is not surprising or hard to figure out why Rivers would want Green alongside the starters. A career 40 percent shooter from deep, Green is also a committed and cerebral defender, the sort of player who will put fires out before they even have a chance to hurt the team. He is the epitome of what you expect from a veteran role player — polished, professional, and almost always in the right place at the right time.

Learning from someone like Green is a boon to the guys who are still trying to make names for themselves at the next level. But the way Green sees it, he has plenty of lessons to pass on to the whole roster, even running mates in the starting lineup.

"My job I think is more important off the floor than it is on the floor for this group," Green said Wednesday, "just helping them understand small details of what it takes to win, to be winners, so teaching small things like guarding pick and rolls, guarding screens, pin downs, coming off, how to use those screens, how to talk to each other, how to be patient and how to communicate defensively, so I think that can help everybody not just certain stars or certain people but everybody across the board, both guards and bigs."

In contrast to Dwight Howard, the former superstar who had to learn how to win as a secondary player late in his career, this has been Green's professional calling for the entirety of his NBA career. The little things were not a bonus, but a necessity for him to remain on the floor. Habits in practice and rehab and day-to-day life as an NBA player carried over from the dog days of training camp to big moments, like his scintillating performance in the 2014 NBA Finals. It has not all been good for Green — just ask Lakers fans about his shooting in the playoffs last season — but the approach never changes. He knows what title teams look like.

Green also knows that he can't walk in here on day one and start barking orders and telling people what to do just because he has a track record of winning. Being the guy who thinks he has all the answers is no way to endear yourself to new teammates. On his first day of practice, Green made note of positive and negative indicators alike, holding onto the latter until he has a read on how to address them.

"I was impressed with the energy. I do think a couple of things stood out, good and bad, that I know we can, or I can, for the better," Green said. "I'm not going to attack it right now, I'm still learning guys, I guess their mannerisms, their habits, and then grow a type of rapport with them first before I say, 'You know what, we need to get this guy in gear or we need to get this guy building the habits of doing this the right way every time or doing this full speed or at least 80 percent in everything we do.' There's times where certain things you take your time, you're doing this early and you don't want to stress the body, but if you want to build those right habits, the pace has to be full tilt to prepare for a game."

Accountability has been the word of the offseason for the Sixers, and when most people hear that word, their mind drifts to the people in management roles. People like Rivers and Daryl Morey (and even beyond that, at the ownership level) are certainly responsible for setting a tone of professionalism in the organization, through practices, minutes distribution, and any number of mechanisms they have to influence their players while not actually sharing the floor with them.

Accountability to one another as players is just as, if not more important. Getting a message from a teammate or seeing the example of a peer cuts through to players in a way coaches can't. In theory, that was part of why the Sixers valued Al Horford as an addition last season, expecting him to set a professional tone that Joel Embiid would follow. Unfortunately, they did not account for the fact that Embiid would hate the roster they built so much that potential lessons fell by the wayside.

Green hits the sweet spot, a guy revered for his commitment to the team who also happens to fit quite nicely alongside the franchise player. This isn't the first time Green has played with a top-tier big, learning how to space and spot up around the likes of Duncan, LaMarcus Aldridge, Marc Gasol, and Anthony Davis, each with their own quirks and preferred spots.

That relationship is a two-way street and requires constant communication, Green says. When Embiid is in the post, he doesn't want there to be guessing involved, and instincts will be built through a combination of communication and reps together on the floor. All the time with other players doesn't mean anything if his new running mate isn't on the same page with him on game nights.

That attitude dovetails almost perfectly with the mindset Rivers is trying to instill in his team.

"What we’re trying to convince our guys is that it doesn’t matter who scores when you go to the post, it matters that we score. We have to have that mentality. If you don’t trap Joel, Joel is going to score on you, we’ve talked about that every day so far," Rivers said Wednesday. "If you do trap Joel, we are going to score, and we’re going to give you every night, you pick it but either way we’re scoring either way. That’s got to be our mindset."

"We have a saying here, when I move, you move, it’s all about post spacing. You got to be in the right spot, when the defense moves, you move to a different spot. What we try to teach and what I try to teach post players is where they’re going to be, so now the passing is easier. When you’re guessing and guys are moving around and you don’t know where, it’s difficult, there are different hands in there. But when you know where everyone’s going to be, it makes it pretty simple.

Getting off of Al Horford's contract was an important piece of business for Morey on draft day, but the team was adamant then and remains so now that they sought out Green specifically, knowing his skill set and professionalism would be a boost to the program. It's a hand-in-glove fit for a team seeking to revamp the culture.

"It's not going to happen overnight, Green said. "It takes day by day and it's a process, it's a project that you hopefully by all-star break, toward the end of the season they're mentally prepared for what's to come."