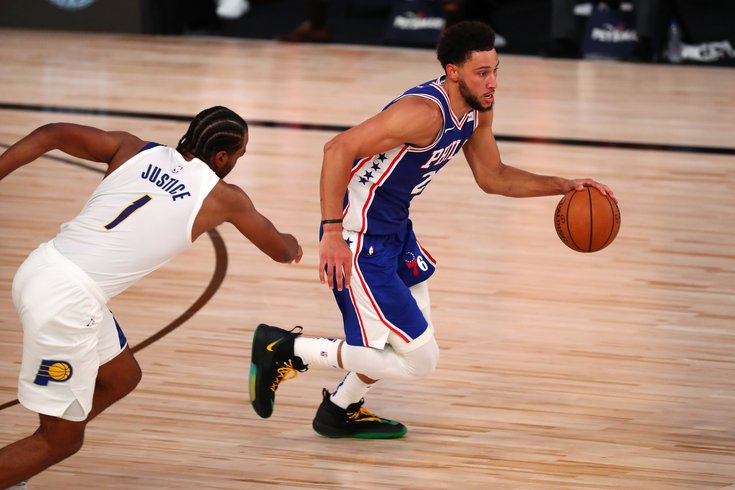 Philadelphia 76ers guard Ben Simmons brings the ball up court against the Pacers.

Another year, another debate about Ben Simmons' position on the horizon. Is he a point guard or a power forward? A facilitator or a finisher? Sixers head coach Doc Rivers had a different descriptor for the role he has in mind for his star pupil this season after the second set of group practices for Philadelphia.

"Just being a terror. Playing. Going downhill. Making guys guard you. Being aggressive. Being a facilitator," Rivers said Monday. "In transition, we want to open the floor and get the ball to Ben. Tell him to go make something happen. He had a good practice yesterday. He had an off-the-charts practice today in two areas. When Ben has the ball, he's very effective in open space. I think we all know that, right? When Ben doesn't have the ball, we have to make someone guard him every single time. That means his cuts, his flashes, his setting picks.

"He was so active doing that today, it was amazing. Today, Joel had four or five post-ups where Ben got a dunk, or someone got a 3. Because we have to work against traps on Joel every day. So Ben's going to have a fun year this year."

Within that description lies the holy grail for the Sixers: Simmons and Embiid working together to score their points instead of succeeding on their individual merits. It has often been a tale of two teams throughout the last three seasons, with Simmons leading a light-speed unit built around his speed and passing, and Embiid acting as a sledgehammer while surrounded by guys who wait and let him go to work.

It has added up to a lot of regular-season wins, but that split personality has cost them in the playoffs when play from your stars has to synergize and take you to new heights. Even duos with much stronger resumes and higher production ceilings had to figure out ways to make each other better to win together. It wasn't until Dwyane Wade bought into being the second banana to LeBron James that the "Heatles" took off in Miami, with their lean into small ball another huge factor in their championship marches.

We don't quite know what the actions look like that these two will be featured in this year, even if Rivers has hinted that pick-and-roll will be on the menu. But while we're used to seeing Simmons lead the break in the most literal sense of that phrase, he says he's now leading the break vocally as well.

"I encouraged everybody to get down the floor, especially Jo," Simmons said after practice Monday. "He’s been running the floor. Even if he doesn’t get it, when he’s the first one down there he’s getting somebody else open. So that kind of basketball leads to easy buckets and that’s something we’re big on this year, that’s easy points.”

"Those guys are clicking right now on all cylinders, learning how to work the low-post, mid-post together," Justin Anderson added after practice. "Playing with Ben before, his speed doesn't surprise me, but seeing Jo keep up and play at that same pace has been awesome to see playing against those guys every day. I don't think they've missed a beat, I just think we're seeing a hungrier Ben and Joel right now, which is a great sight to see and I'm glad to be a part of it."

Nothing has ever stopped the Sixers from working on that sort of thing except for, well, effort and conditioning, which has been a sore spot for Embiid throughout the last few years. While some of the conditioning issue can be attributed to various injuries that derailed him over the years, rarely have we seen Embiid at his physical best, outside of the opening stretch of 2018-19 where he looked like a legitimate MVP candidate. The sight of Embiid drifting into frame and settling at the top of the key for an early three has become all too familiar to fans, especially those who don't want him shooting jumpers in the first place.

The early camp key, then, is to build new habits for the two stars, to force both players to embrace pieces of the other's game. If Embiid is to run the floor and draw attention in the middle of the court, opening up corner threes, Simmons has to be an active and responsive cutter, darting into the right positions when doubles come to Embiid in the post. So far, it sounds like that has been happening frequently in camp.

"One thing I think we're really trying to get them to do is to play more two-man games with each other," Rivers said Monday. "They had a great one today that was just a distinctive action, that Dave Joerger and I were laughing like, 'You're not stopping that.' But they have to do it instinctively more than us always having to call it. And, if they can do that, they're going to be tough to stop.​"

“[We're] connecting and building our chemistry in terms of where and when he wants me to cut, me reading the defense and knowing when I should cut, get to the rim, slash or whether I’m spotting up and shooting the shot," Simmons added. "Just reading off Jo, we’re going to continue to get better and build our chemistry on the floor especially with this new team and new players surrounding us. I think it’s just going to be great because everyone is really buying in.”

While Simmons acknowledged the surrounding personnel will aid their development, his focus after practice Monday was on what he can control along with his partner regardless of the context. Scheme and lineups can only take them so far without skill development. It'll be hard for Simmons to do damage as a cutter if the player guarding him is sagging back toward the paint, something we've seen play out over and over again the past few years.

Here to combat that problem is new assistant Sam Cassell, who Simmons was in the lab with before camp began to work on the finer points of his game.

"We would just go on the floor and work out. A lot of midrange game, a lot of corner spot-up 3s, lane 3s, finishing around the rim," Simmons said. "A bit of everything, and the more so into training camp after practices and before, getting a lot of shots and reps up.”

If the roster moves have not made it clear enough, Rivers is going to trust Simmons to initiate the offense more often than not this season, a thought that will inspire plenty of debate amongst fans. And though Rivers has continued to say he won't reduce him to just a label, it's clear the direction this is going.

"He's our facilitator, for sure. Unless I have a true, true point guard like a Chris Paul or Rondo, I rarely, I don't think I called anybody a point guard the entire year last year," Rivers said Monday. "But Ben is clearly our facilitator, and Ben is special, man. When he gets the ball in the open floor, there's very few like him."

• As the Philadelphia Eagles were in the midst of vomiting all over themselves Sunday, a pair of Sixers (Tyrese Maxey and Mike Scott) were reported to have missed the start of camp due to COVID issues. For the rookie, it seems he joins a long list of young players who suffer adversity early in their Philly tenures, and it's a particularly tough blow for a rookie this year, given the abbreviated preseason and lack of Summer League.

The Sixers have tried to keep Maxey involved anyway. Rivers told reporters Monday that Maxey has still been able to watch practices through Zoom, and has gone through the work with an assistant coach after each practice to emphasize points specific to him, floor spots being the main example. Though there's concern about whether that keeps him close to being read — some people learn through doing, as Rivers correctly noted on our call — but Maxey is expected to arrive in the coming days for them to find out.

It’s going to be interesting because I think he’s a feel player going by film, you know, but you obviously don’t know until you get in the gym," Rivers said. "I think that will help him a little bit. But man, I can’t imagine being a rookie...first day, hi, time to play. It’s been difficult I guess around the league, I think they’ll get it, it’s just going to take time."