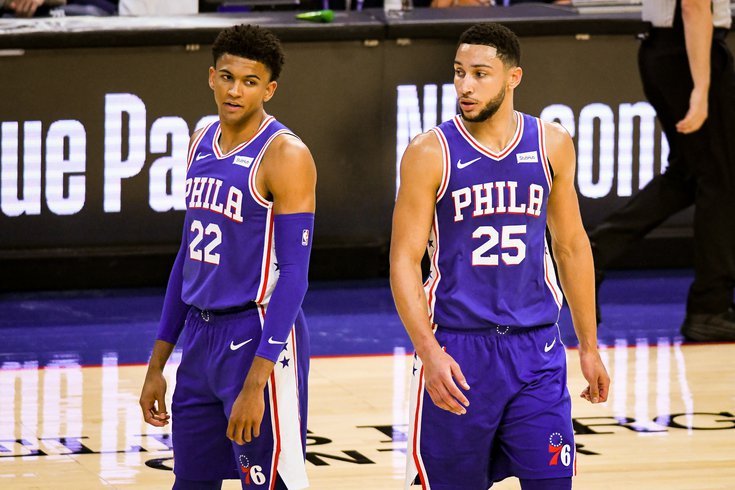 The Sixers have aggressively turned over the roster in the time since Daryl Morey joined the team in late October, and now we're only weeks away from seeing this group take the floor together for the first time. I know some of you are asking yourselves a question — who is actually on the roster right now?

If you haven't been making your own handy depth chart at home, I figured I'd do you a solid and put together one myself. Consider this your cheat sheet as we head into the year, and feel free to pair it with my thoughts on how the rotation might shake out under Doc Rivers. And as always, while others have their own rules for positional designations, I live by one basic belief: you are who you are able to defend.

(A quick note before we get going — this assumes the Al Horford for Danny Green/Terrance Ferguson swap will go through as planned on December 8th. Any additions/changes to the framework of that deal, while still possible, have not been revealed yet.)

These two position groups are being lumped together because the positional alignment doesn't necessarily reflect how they'll be used for this team. In fact, guard descriptors are pretty useless in a general sense. What's important to know is whether a guy is a play creator or a play finisher (e.g. a distributor or a scorer) and how that impacts the sort of players put around them. Of this group, I would say Walton is the only guy you'd consider a "true point guard" and I don't think he'll make it past camp cuts.

Philadelphia has a lot of guys who straddle the line between the two archetypes, which is both a gift and a curse. Curry, Milton, and to a lesser extent Maxey fit within both buckets as guys who can be expected to create some for others and will finish lots of plays themselves. Even within that trio, there's a difference between Maxey's finishing (strongest at the rim) and Curry/Milton's finishing (strongest beyond the arc). They don't have a real-deal creator in this group, but that's not as big of a deal on a roster with Simmons and Embiid.

My question at this stage is how small Rivers is willing to get in the backcourt. There are defensive concerns with a combination like Milton-Maxey (predominantly on Milton's end of things) but I can easily make the case that the problems are at least as bad with a guy like Korkmaz or Joe on the floor in Maxey's place, with less dynamism off of the bounce to boot.

Rivers is a guy who loves movement shooters, so I would not be surprised if it's tough for Maxey to get minutes early. But I think there's nice potential for lineups starting with multiple combo guards.

This also might end up being a pessimistic view of Ferguson depending on how that competition plays out when he arrives with Green on December 8th, but I assume they have more interest in developing Joe after dipping into their midlevel to sign him for three years.

Again, I think there's some overlap between these two groups, but this time I think the malleability is on the defensive end of the floor. A lot of people have expressed concern about the lack of "power forward depth" but that's a non-issue with the way the game is played today. Simmons can slide up when Harris hits the bench, and I think it'd be a good idea to have him defending stretch four types in the middle stretches of games so that he can take some plays off or potentially get more active in passing lanes.

An important note: Simmons is in the forward bucket because of his defensive assignments, not because I see Rivers taking playmaking duties out of his hands. In fact, Rivers has outright said he is going to hand the keys of the offense to Simmons and get out of the way.

"Because he's gonna have the ball in his hands so much," Rivers said during media week, "he has to have an understanding every night of what we're trying to do and what we're trying to get, and he has to be able to communicate that through everybody on the floor. So he has to become a great studier of our offense, of the opponent's defense, he has to know every single position on the floor and understand where everybody should be, and he has to vocalize that...is Ben a point guard? Honestly, I don't care, I don't even know that yet."

To me, Simmons will be a "point forward" in every sense of the word. He's going to act as a point guard getting Philadelphia into their sets, and he will guard top wing assignments on the other team every night, particularly in crunch time.

If Anderson survives cuts for a reason beyond his partial guarantee and friendship with Joel Embiid, it's the added bulk he gives them to defend wings. Thybulle is a great young defender, but at this point, he's better suited to guard smaller players than he is the Jayson Tatum types of the world, as we saw in round one against Boston. Anderson would give them an option to check bigger wings off of the bench, and that allows Thybulle to focus on what he's better at.

(Yes, I bent my own positional rules a bit for Thybulle, sue me.)

Not a whole lot to analyze here. Embiid is the guy who ties it all together on both ends of the floor, and Howard will be his primary backup as long as health permits. On the nights where Embiid can't or won't go, Howard is plenty capable for fill-in duty and Bradley is at least passable as a backup.

The big concern here is that once you get past Embiid there's basically no hope for spacing at the five spot, save for Reed getting a shot to play real minutes this year (which I'd say is unlikely, but not impossible). With Simmons anchoring second units sans Embiid, that could end up being a particularly problematic roster feature they have to address down the road.

But Howard is a great pick-and-roll partner for guys like Milton, Maxey, and Curry, and perhaps even Tobias Harris, who Rivers said this week needs to get back to being a quick decision-maker with the ball in his hands.

"Tobias and I have obviously talked a ton since me taking the job," Rivers said. "First thing we have to get him back to being is a quick decision player. I told him I saw him dribbling way too much. Tobias is so darned skilled going downhill, left and right, and we need to get back to taking advantage of that."

Unless one of Milton or Maxey emerges as a legitimate sixth man (I'm more pessimistic on this than Rivers seems to be), the most glaring need for this team appears to be a high-level creator who can put pressure on playoff-level defenses. In theory, Tobias Harris was paid $180 million to be a guy they can count on to deliver in big situations, and maybe Rivers can extract that from him with a more pick-and-roll heavy attack. It takes a lot of imagination to think he can suddenly transform into a big-time player in a playoff setting.

We're going to see and learn more about what's missing over time, so we'll leave it here for now.