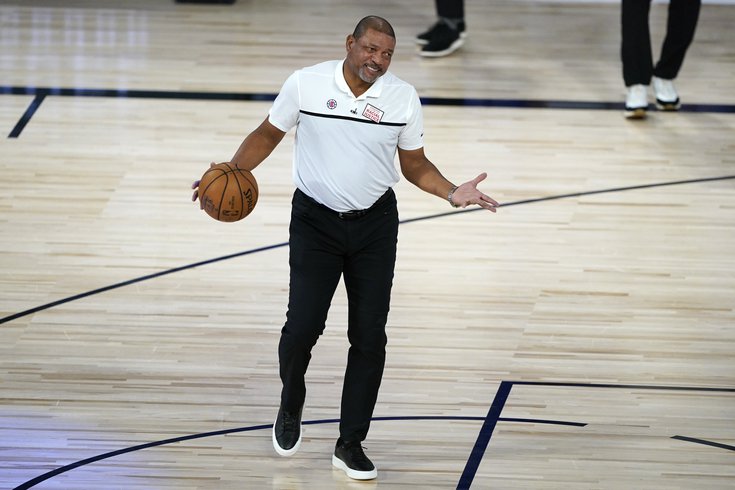 Almost nine months removed from the NBA shutdown that marked the start of a change in American life, the Sixers have returned for training camp. In many ways, the situation is worse now than it was then. As COVID case counts rise nationally, the NBA is preparing for a season closer to normalcy than what we saw this summer, when they kept their players and employees safe in a bubble that looks like a bigger achievement by the day.

And Doc Rivers is worried. Players and coaches have the familiarity and luxuries of home now, the ability to order takeout from anywhere they want just like the rest of us, but the freedom that comes with it is something he doesn't take lightly.

"I’m very concerned if we can pull this off," Rivers said on a Zoom call Tuesday. "Just watching football, in college you have Ohio State missing games, Pittsburgh and Baltimore can’t even play a game [in the NFL], they can’t get to it. Hopefully, they play Wednesday now. The difference in football [is] they play once a week, they have one thousand players, so when you miss three or four players you can still get away with it."

"If we miss three or four players, we’re in trouble, especially with the amount of games, we’re playing 3-4 games a week. So if one of our guys or two of our key guys get the virus and they miss 10 days to 14 days, that can be eight games. In a 72-game season that can knock you out of the playoffs."

It's closer to normalcy than a trip to Disney World, but there's a lot Rivers can already see changing about his preseason process.

Conditioning was a big theme of Rivers' call on Tuesday, the coach emphasizing that it's hard to know who is actually in shape when they aren't able to go through full-team workouts yet. Unpacking an answer about how he can get Ben Simmons and Joel Embiid to the next level, Rivers underscored that conditioning is one of the bare minimum requirements it takes to become a championship player. The rest of his preseason checklist flows from that very basic principle.

"Normal training camp, I would come in day one and know who’s in shape and who’s not," Rivers said. "The reason that’s so important is because of injury. You don’t want to be working on something the guys literally, physically can’t maintain. I would say conditioning would be first, and then defense, and where we’re at just getting our defensive philosophy and who we’re going to be every night would be second. And then third is how we play offensively, how do we play and look every night."

Having to focus so much on conditioning feels a bit like stagnation for this group — it wasn't so long ago that Brett Brown was trying to beat teams with pace and fitness when the Sixers had little talent to speak of. But given the long-running concerns about their franchise center in this department, it's a wise place to start, even if Philly has a whole lot else to figure out and very little time to do so.

The offensive side of the ball is where Rivers is expected to have the biggest impact on this group, with Rivers consistently coaxing top-10 year after top-10 year out of his teams on that end of the floor. How much of that was a product of good fortune (the man did have Chris Paul, Blake Griffin, Kawhi Leonard, and Paul George by his side) is difficult to say, but one thing we can say for certain is that this team will set up differently under Rivers, a much more pick-and-roll friendly coach than Brown was.

There's a caveat — Rivers is not expecting to flip this thing upside down from the start. Incremental gains are the focus in Philly, and Rivers admitted he did not expect to have his rotation set (or even close to set) by the time they open the season in late December.

"We're gonna be very careful in what we do so we don't overthink this. I don't want them out on the floor thinking right now," Rivers said. "But I guarantee you we'll run more pick and rolls, and I guarantee you'll see more pick and rolls with Ben and Joel in them. But I like a lot of the stuff they ran in the past, too. They had some pretty good movement stuff. We want to make sure that because of this shortened preseason, shortened training camp, and quick first game that we don't try to do too much. We want to make them as comfortable as possible."

Until all of these guys are able to get on the floor and practice together, it's going to be hard to make heads or tails of the situation. Philadelphia's trade for Danny Green and Terrance Ferguson can't even be completed until December 8th, pushing back the arrival of one of Philadelphia's presumed starters, heightening concerns about just how short of a window they have to get things in tip-top shape before the real games begin.

Rivers named several teams they're competing for seeding with — the Heat, Bucks, and Celtics — as groups with a leg up by way of their continuity alone. There are established systems and established stars in place, and though two of those teams had high-profile changes of their own this offseason, they did not undergo the full franchise makeover the Sixers did.

But the Sixers are not using that as an excuse, nor is Rivers using it as an opportunity to be more forceful as a coach. His players, Rivers believes, will be the guys who ultimately define what this team looks like and how good they can be, even if he knows the thresholds they have to hit to be a title contender.

"I have my own thoughts that I will not share yet because I want to make sure we get in the gym. I call it the lab," Rivers said. "You have to get in there first. And the identity has to be what they believe it is, not what I want it to be."

• The lack of a second-unit playmaker/scorer has been a topic of discussion the last few weeks, with the Sixers seemingly opting against getting a veteran free agent to let a battle play out for the sixth man role. At the moment, Shake Milton appears to have a leg up on the competition, no surprise given how badly Milton torched Rivers' Clippers last year.

Drawing comparisons to guys like Lou Williams and Jamal Crawford is a nice compliment to the young guard, but he won't have as long of a leash as those microwave scorers did in L.A., at least according to Rivers.

"Right when I took the job, Shake is where my focus has been. I've got to let him play even freer, which is crazy, and I will say when I told him that he was very happy with that news," Rivers said Tuesday. "I told him I would hold him far more accountable defensively than I did for Jamal and Lou for sure, but Shake has that ability in him."

If anything, this suggests it may be tough sledding for Tyrese Maxey early on, in spite of the team's excitement to draft him. Rivers was complimentary of Furkan Korkmaz during the call Tuesday, and if Milton ends up heading the second unit, Maxey's ability to shoot becomes a lot more scrutinized in the early days. We'll see how this plays out once they can all compete in camp, but rookies have been dealt an unfortunate hand this year.

• If you're expecting Rivers to walk in here demanding for Ben Simmons to shoot threes, think again. The head coach has made it very clear he does not want to fundamentally change who Simmons is, and if anything, Rivers wants to be clear that he is not trying to impact Simmons in the way he thinks the game.

"I care that he’s a great player and I’m going to let him play, I’m going to give him the keys and let him be free and play," Rivers said. "If he takes no shots, I’m fine. If he takes 10 threes, I’m fine. If he gets to the line 15 times, I’m fine. Ben is brilliant enough for me to allow him to play and not get in his way and try to cloud his head up with a bunch of crap. It’s about winning, and that’s what I want Ben to focus on, how to make each other better and win."

(Sidebar: I'm sure many people would forget the three-point issues altogether if Simmons made it to the line 15 times per game. It would require him to be a completely different sort of player, unfortunately.)

Another interesting remark from Rivers' availability came toward the end, when he was riffing on Simmons' responsibility as a leader and how much pressure he puts on the young man to do so. While Rivers was clear he isn't locking himself into a decision one way or another, and he has been clear on his disdain for positional labels, anyone burying the "Simmons at point guard" era should make sure they don't finish the job yet.

"Because he's gonna have the ball in his hands so much, he has to have an understanding every night of what we're trying to do and what we're trying to get, and he has to be able to communicate that through everybody on the floor," Rivers said. "So he has to become a great studier of our offense, of the opponent's defense, he has to know every single position on the floor and understand where everybody should be, and he has to vocalize that. And so he will do that."

Is he a point guard though?

"You know, Ben is a great decision-maker. You know, is Ben a point guard? Honestly, I don't care, I don't even know that yet."