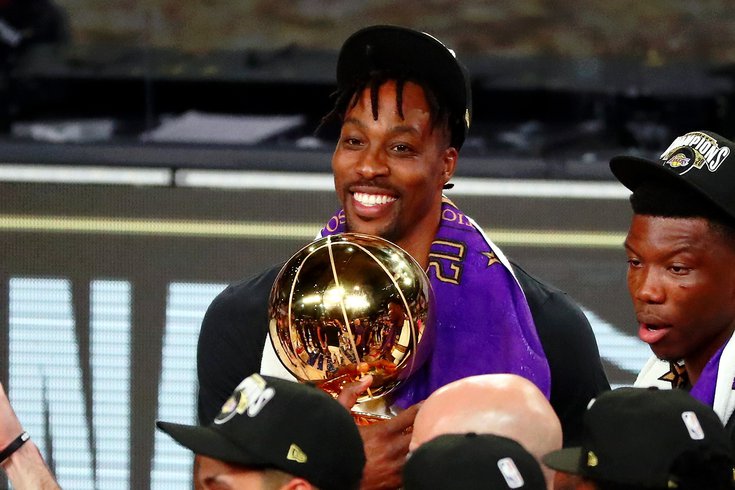 The first Dwight Howard interview in Philadelphia has an inauspicious start. Howard is finishing up a late lunch — baked chicken, sweet potato fries, and a bit of corn, he says — and has forgotten to take himself off of mute on the Zoom call. 35 years old, he's still struggling with the new constraints of 2020 like everyone else.

A decade ago, Howard was at the peak of his powers, in the middle of eight straight All-Star appearances and three consecutive Defensive Player of the Year awards, the best presumably still ahead of him. Health and ego, he says now, are the two things that stopped him from building on that early run of success in Orlando, bouncing between five different teams in seven years. When it finally clicked last season, culminating in his first championship, the new Sixers backup was just a role player supporting the LeBron James-Anthony Davis star duo.

These experiences, Howard tells reporters, have provided him with lessons to share with Philadelphia's younger stars.

"You don't want to have to go through all of those steps to get to the top. I think it's a straight and narrow path. And that path is hard work, dedication, and sacrifice. You cannot allow nothing to get you off your focus," Howard said Wednesday. "The road to the championship is narrow. It's thin. And if you waver off just a little bit, it will kick you back to the beginning.

"I've had an opportunity to play in the Finals before when I was in Orlando, and it took 11 years to get back to the Finals. I just want those guys to know that nothing is promised. So, while you have an opportunity and a moment to get back to the top and to be a champion, don't take it for granted. Some guys have never played in the Finals. Some guys have never played in the playoffs. Some guys have never won championships. It's one of the hardest things to do in your basketball career, so it's all about just staying locked in and not jumping off the rope for anybody, but staying locked in on the goal."

Two years ago, the Sixers suffered a humiliating defeat at the hands of the undermanned Boston Celtics in round two. For their two young stars, with Ben Simmons in his rookie season and Joel Embiid in his second, this was a potential stepping stone. One season and two major trades later, the Sixers came as close as any team to knocking off the eventual champs, losing in heartbreaking fashion to the Toronto Raptors in 2019.

Bad luck and bad management kicked the Sixers back to the beginning in 2019-20. Roster moves sapped Embiid's passion, and his disinterest fueled a terrible away record for Philadelphia. Simmons, an iron man during Philadelphia's two previous seasons, suffered two different injuries that derailed his season. The Sixers suffered another humiliating playoff loss to the Celtics this time around, prompting major changes on and off the court for the organization. Entering the 2020-21 season, Philly is +2500 to win the title, according to TheLines.com, good for the 10th best odds in the league.

The Sixers were (and still are) in danger of becoming one of many talented young teams that never quite make it. Frankly, they have not earned the right to even be compared to some of the more noteworthy examples throughout history.

Penny Hardaway and Shaquille O'Neal were 23 and 22 respectively when they made their Finals run together in 1995. The OKC Thunder trio of Kevin Durant, Russell Westbrook, and James Harden was all 23-and-under when they made their 2012 Finals run. Ralph Sampson and Hakeem Olajuwon were 25 and 23 when they made a surprise run to the Finals in 1986, upsetting the Showtime Lakers in the Western Conference Finals.

The problems that doomed these teams — money, ego, health, even drugs in the case of the Rockets — are still pitfalls for these Sixers all the same. But entering the fourth season of the Embiid-Simmons partnership, there is no longer widespread fear about their promise from opponents, as there was when they looked to be on the first step of an ass-kicking journey in 2017-18.

Howard, who clashed with Kobe Bryant and James Harden as his body began to betray him in his late 20s, knows exactly how quickly it can all fall apart. He was the biggest piece in the 2012 blockbuster that sent him to the Lakers, and a massive coup for Daryl Morey when he was signed to be Harden's running mate. Not long after, he became a stat padder for irrelevant teams, his career on life support when he signed a non-guaranteed deal to join the Lakers last season, a deal only struck after an injury to DeMarcus Cousins made the Lakers desperate for help.

It makes Howard a uniquely qualified messenger for Embiid and Simmons in the locker room. He is not some career role player who lucked into winning in a good situation, but a franchise-driving talent who watched as his ability to carry a team dwindled over the years, a product of his own mistakes as much as misfortune. His message, similar to what we've heard from new head coach Doc Rivers, is that the name of the game is sacrifice.

"Winning the championship was everything," Howard said of last season in L.A., "and it made me realize I could have the best stats in the world and it don’t mean nothing. Because here it was, I won a championship and there was games where I didn’t score a bucket, or get a field goal, or get minutes in a game. What really matters is just holding up that trophy, that would be my message to everybody on the team: what are you willing to give up to get that trophy?

"Sometimes you got to give up everything. Sometimes your role and what’s required of you [is] to give up the things you want to do the most. For me, I would have loved to be the guy to score all the points and rebounds, but my team needed me for a specific purpose, and that was to provide the spirit and energy on and off the court. I think I did a pretty good job at it, and whatever this team asks me to do, I’m willing to do it."

This is not a case of Howard coming here thinking he has the book on winning because he was fortunate enough to hitch his star to LeBron. Far from it, in fact. Howard is both understanding of the role he has to play and a believer in the talent the Sixers have here. Simmons, he says, absolutely deserves comparisons to a younger LeBron James, his belief being that the 24-year-old can be one of the greatest ever. Embiid is the star, a one-of-one who Howard has no intent to try to surpass or even replicate, his strengths different from Howard's.

Changing who Embiid is as a person, Howard says, is not something he thinks has to happen for Embiid to become a winner. The reckless tweets, the in-game dancing, all of that can be part of a winning formula as long as it's only part of the story.

"I don't see what he's doing as being goofy. He puts in the work. I think people, they twist things around when they see people laughing and joking and having a good time and they say they're not serious, or they're not focused enough. It's just a time and a place for everything," Howard said Wednesday. "It makes other opponents upset, it keeps him locked in and the team plays better.

"Now will there be times when we all have to be a little bit more serious? Yes. And that's something we'll all have to learn together. How to be in certain situations. But I don't think that's a part of the sacrifice. I think that's a part of just understanding time and place. And I think that will be good for me to help show some of the younger guys because I have been in that position before where people thought I wasn't focused or that I was playing too much."

Still, there's plenty Howard feels he has to share with these guys. That starts with being the best version of Dwight Howard he can be every day, as a worker, as a teammate, as a cheerleader on the bench if the situation necessitates it. Conditioning, a weak point in the Embiid package, is something Howard says he takes very seriously from a physical, mental, and spiritual perspective, a far cry from when he reportedly ate the equivalent of 24 candy bars per day during his ill-fated season with L.A. in 2012-13. Even if it's something as simple as setting the tone in the weight room, there is value in having a peer lead the way.

Is this a new Dwight Howard or just a bunch of nice words on his first day here? That's up for you to decide for now, and the results to say over time. Howard did a good bit of pandering during his first sitdown in Philly, naming Wilt Chamberlain as his all-time favorite player despite Howard being born 12 years after The Big Dipper played his final professional game.

But if your actions show who you are and not your words, Howard's last season in Los Angeles is proof of a man who learned from his failure. He watched, as millions of others did, when Joel Embiid cried his eyes out two years ago after that Kawhi Leonard dagger in Toronto. Through that pain, Howard says, Philadelphia's path to contention will be forged.

"I watched when Joel lost [vs. Toronto] and how bad it hurt, he just cried, and I know what that feels like. I’ve been in that moment before where it’s like, man, I gave everything I had," Howard said. "I put it all on the line and I came up short. It doesn’t sit well with you, it stays with you for a really long time. So with him I know he has a fire inside of him, and we’ve all seen glimpses of it all year, and I think this is the year where it’s about being focused. I see focus in him, I see focus in Ben, and that’s where it starts with our two best players."