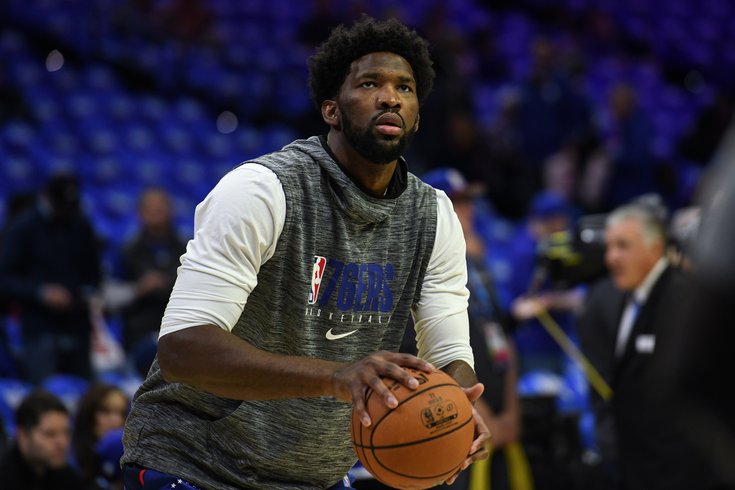 After a long layoff and under the restrictions of COVID-19, the Sixers could have rolled in for the first day of training camp out of sorts and out of shape. But on a day Furkan Korkmaz labeled, "long and sharp," their new head coach came away impressed by the squad, even with some expecting huffing and puffing in their first group session of the season.

"Usually, heading into camp, guys have been back at their facilities, playing pickup games all summer," Rivers said Sunday afternoon. "There's probably seven, eight guys that haven't played a game of full court basketball since their last game in the bubble. That's unusual, and that's all around the league. So I was really looking at conditioning, timing, and honestly, I was surprised, at least on the first day. I thought we got tired early, which I expected, but I was surprised at how well we played today."

Everything except for their two most important players is new for Philadelphia this season. New management, new roster, new coach, and a new set of guidelines that are beyond any of their control. It's a unique camp even by NBA standards — there has been no time to install plays ahead of time, see close to a full group in the gym, or even get a full grasp of the impact a new staff can have. As Rivers noted Sunday, it's not as though he brought an entire staff with him from L.A., and even the coaches have work to do to make sure they're all on the same page heading in.

One thing has been clear about the direction of the team for weeks now, and it's the increased emphasis on shooting around Joel Embiid and Ben Simmons. Rivers told reporters they are not remotely close to setting a rotation a few weeks out from the season, but the roster changes have made it easy for the new head coach to keep shooters around that duo at all times.

"We have the ability to keep shooting around those guys, and if we do that right, then Ben and Joel can live in freedom," Rivers said. "We want them to play in space as much as possible, so we're going to do that. I don't have any key rotations that I want to try. I have rotations that I think all over the floor that you want to use."

"They put the team together to give them as much space as possible," Seth Curry added after practice, "and I’m one of those guys who can hopefully take some pressure off of them by giving them space and being able to make plays here and there. It’s just a process of getting to learn their games and where they like guys to be and where they like to get the ball. It’s going to take some time for a lot of the new guys to get used to playing with them, but it’s exciting because anytime you’re on the floor with two of the greatest players in the league right now, it makes my job a lot easier."

The Sixers know that's not going to be enough on its own, and they're aware of the hole they're in compared to other hopeful contenders around the league. Rivers named several teams — the Lakers, Clippers, and Bucks — as units with history and chemistry and an understanding of what they need to do right from the jump. It seems like an age-old problem for Philadelphia at this point, with each year bringing major roster changes and questions about chemistry, even if the coaching philosophy was fairly static.

This year, the Sixers haven't just inherited Rivers and his coaching resume, but a decorated cast of assistant coaches. New assistant and former NBA guard Sam Cassell has already been in the ear of Ben Simmons, hoping to pass down some of his wisdom to the guy who will control a lot of Philadelphia's offense. And the two biggest names on Rivers' staff, Dave Joerger and Dan Burke, are expected to have significant input on how the team sets up on offense and defense respectively.

Much like President of Basketball Operations Daryl Morey, Rivers believes in collaboration. Sharing fundamental beliefs is important, and Rivers mentioned Sunday that he and Burke share a common mentor: Pottstown native Dick Harter, who coached Rivers as a player with the Knicks and was with the Pacers when Burke joined the Indiana staff in 1997. With that shared background and belief system, Rivers believes they can focus more on broader team tendencies. An early point of emphasis for Philly? Being loud. Rivers singled out Simmons and Embiid at practice Sunday and demanded that they lead the defense with their voices, not just their actions.

But Rivers doesn't fill out his staff looking for yes men and staffers who have worked with the same people he has. Luring smart, vocal assistants was a big part of the draw in hiring Rivers to begin with, and he believes they are already starting to make an impact on the new-look Sixers.

"I thought when he was in Sacramento and Memphis they ran great stuff," Rivers said of Joerger, the team's offensive coordinator. "I wanted him on my staff. I want to sit with him and go over his stuff, go over my stuff and try to mesh it together. Today I told Dave I want them to hear your voice as much as mine offensively. That's something I don't do a lot. But one thing I've always learned is to always stay open as a coach, you learn more that way and you get better that way."

As for the proclamations from his players about the tone and vibes around camp right now, Rivers has seen too much (and suffered too much, I imagine) to think he knows the soul and spirit of this team after just one day of group practice. He complimented Embiid's fitness base, he was satisfied with their pre-camp preparation, and as he has said many times over, he's excited for this group to get rolling.

But he knows they're just like many other teams around the league, getting a contact high on the first day of a new journey. Making that fresh feeling last is what separates the real contenders from the bog-standard teams. As the head coach sees it, only one franchise has the right to rest of their laurels a bit.