The inside of the Wells Fargo Center prior to a Sixers game.

The NBA released the schedule for the first half of the NBA season on Friday, and from the look of things, Philadelphia has fallen pretty far down the totem pole of relevance. A national TV darling in years past, the Sixers only play nine true "national TV" games during the season's first half, the first coming on January 7th against the Brooklyn Nets on TNT.

While that's still a decent number, they've been moved out of the spotlight for intriguing young teams like the Pelicans, rising MVP candidates like the Mavericks, and could-be juggernauts in the aforementioned Nets. Philadelphia exists in a weird spot right now — not young enough to be viewed as an on-the-rise group, and not successful enough to be one of the centerpiece teams.

After being an integral part of the league's Christmas schedule over the last few years, the disappointing 2019-20 campaign took the Sixers down a few notches. NBATV dates with the Knicks (December 26th) and Magic (New Year's Eve) will technically bring the new-look Sixers to broader audiences early in the year, but they are not the marquee matchups we've seen them draw in years past.

A bit of skepticism from schedule-makers/TV executives is not surprising, and it will allow the Sixers to move under the radar in the early days. It buys them valuable time to get their feet under them and learn more about the group they have, as they work through lineup combinations, who sticks in the rotations, and stylistic changes that will ultimately define their success. That first game against Washington, however, should be a fun one, as it will now feature longtime Embiid foe Russell Westbrook.

A new quirk for the post-COVID world: Philadelphia will participate in mini-series matchups throughout the year, a measure taken by the league to cut down on travel and reduce the risk of spread. The Sixers' first series of the year will come in early January against the Charlotte Hornets (January 2nd and 4th) with more to come against the Heat (January 12th and 14th), Celtics (January 20th and 22nd), Pistons (January 23rd and 25th), and Raptors (February 21st and 23rd). Both games against the Celtics will be broadcast on ESPN, with the intrigue of that matchup one of the true highlights of the first-half schedule.

On the local front, home games will indeed mean no fans for the Sixers in the early days. Coinciding with the schedule release, Sixers season ticketholders began receiving emails on Friday notifying them that there would be no fans at the Wells Fargo Center to start the year. While that policy is subject to change as the year wears on and potential breakthroughs are made in the fight against COVID-19, for now the team is following local and state mandates for large events. A team spokesman told PhillyVoice that ticketholders had stopped being charged for their packages as of November.

The Sixers, currently at +2500 to win the NBA title, according to TheLines.com, play six back-to-backs during their first-half schedule, with many of those built into the first month-and-a-half of the season. It's a light schedule matchup wise through the first couple weeks of the season, with tougher matchups during the middle and a rough travel stretch toward the end looming as potential pitfalls for Philly. Two stretches stand out for me:

As far as a draw could have gone, it's not a bad one for them — they'll get to warm up their new roster and work through the kinks of a new scheme while lining up against a cupcake-heavy schedule in the early days. It gets harder over time, but they should be ready for a test by the time they get closer to the midseason mark, assuming nothing goes haywire in the meantime.

(To be clear, never assume things won't go haywire for this franchise.)

A complete look at the schedule (plus the broadcast times and channels) can be found below: 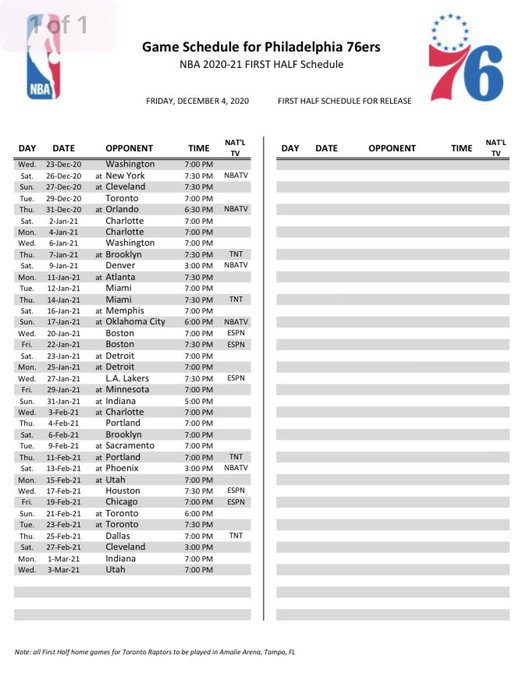