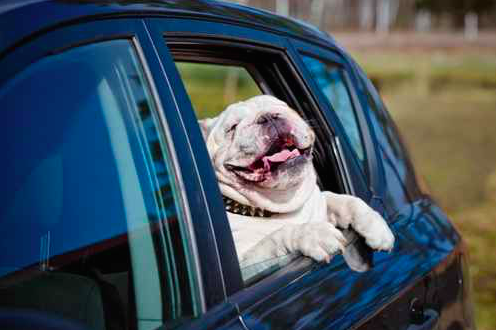 How insurance eventually words the settlement on this one should be interesting.

A black labrador retriever in North Carolina is a constant companion of her owners, Ruth and and Michael Smith. During a grocery run on Sunday, however, something startled the dog and sent her into the lap of Ruth, who was at the wheel of the couple's 1988 Dodge.
The dog, named Caroline, weighs in at 90 pounds. She wouldn't budge, and Ruth couldn't get her foot off the pedal. Eventually, the car rammed through a wooden fence into a swimming pool, 7ABC in North Carolina reported.
The couple who own the pool were sitting in their kitchen when the crash occurred. John McNamera, the homeowner, rushed out to ensure that no one was hurt, but also feared for his own health after coming off a recent open heart surgery.
Fortunately, no one was seriously injured, and Michael said he doesn't blame the dog for the incident. He added that he felt bad about what happened to McNamara's pool, but was thankful it was there to save them from a much worse accident.