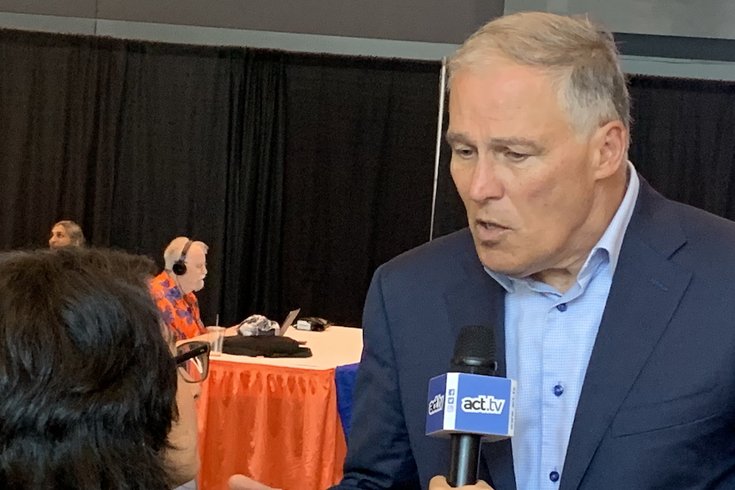 Washington Gov. Jay Inslee answers a question during the annual Netroots Nation conference on Saturday in Philadelphia. He was one of four Democratic presidential candidates to attend the conference to discuss issues.

Four Democratic candidates told a Philadelphia audience on Saturday how they will beat Donald Trump in the 2020 presidential election.

Sen. Kirsten Gillibrand of New York, former Secretary of Housing and Urban Development Julian Castro, Senator Elizabeth Warren of Massachusetts and Gov. Jay Inslee of Washington all appeared separately at Netroots Nation, an annual conference of online-oriented political liberals, which throughout its history has sought to cultivate presidential candidates.

The event, which started Thursday, was held at the Pennsylvania Convention Center in Center City. The organizers announced afterwards that 4,000 people attended Saturday's candidates forum.

Each candidate was received positively by the crowd, although Warren received the most sustained round of applause, with a large portion of the crowd getting up after her speech for the chance to meet her (she did not appear in the hallway.) But she was interrupted by a group of activists who unfurled a banner during her speech.

In addition, the candidates provided very different approaches for the age-old question of whether to hold a baby on the campaign trail.

Before the presidential candidates, two top local politicians, Mayor Jim Kenney and City Councilwoman Helen Gym, addressed the conference. The mayor began by invoking the name of activist Octavius Catto, vowed to continue to resist ICE, and, in the tradition of Harry Potter and Valdemort, refused to call the president by his name.

Gym gave an impassioned speech that got loud cheers. She referred at one point to a "Philly political icon" (most likely former Mayor Ed Rendell) who referred to the far left as "the biggest threat to the Democratic Party. "I told him he was damn right." She left her speech whole holding up a "Save Hahnemann" shirt, in reference to the hospital just a few blocks from the venue that is set to soon close.

Sen. Sherrod Brown of Ohio, who reportedly considered a presidential run but didn't take the plunge, also spoke, in part about how he won a comfortable re-election in Ohio last year, two years after Trump carried Ohio by double digits. He did this while not holding back or moderating his views, even in more conservative areas of the state.

"I called Donald Trump a racist because he was, and he is," Brown said.

The presidential candidates were interviewed on stage by Daily Kos founder Markos Moulitsas along with Cheryl Contee, CEO of Do Big Things. The candidates answered questions submitted online, as well as those directly from the moderators and from the crowd.

First up was Sen. Kirsten Gillibrand of New York, who denounced Trump for doing things that "literally rip apart the moral fabric of this country," including his immigration policy.

"It's inhumane – I can't stand how he demonizes and demeans," she said.

Gillibrand also spoke for a long time about the question of white privilege, and the viral answer she recently gave to a mother in Youngstown, Ohio, who had asked her what she says to people struggling right now who don't appear to have benefited much from privilege of any kind.

"My job is to fight for her and her family as if they were my own," Gillibrand said, noting that the woman's son, as he grows up, will likely be in situations where his whiteness protects him.

Gillibrand also vowed to guarantee Medicare for All if elected, and touted "the most anti-Trump agenda and voting record in the U.S. Senate."

After answering an in-person question from a woman holding a baby about whether or not she will commit to closing the Berks County Detention Center – Gillibrand said she would – the senator agreed to hold the baby. But when asked a question by a different woman holding a baby, the next candidate on stage, Julian Castro, took a pass.

Castro, the former San Antonio mayor and secretary of Housing and Urban Development, was asked a question by Sarah Woodhams, a Pennsylvania leader of the labor group United For Respect, who was affected by the recent closure of Toys R Us.

When Woodhams asked Castro if he wanted to hold the baby, he said no, stating that "I'm not gonna be the typical politician." Explaining he'd been "shaking a million hands," he said he didn't wish to risk getting the baby sick.

PhillyVoice caught up with Woodhams after the forum. She said that while she thought Castro had some good ideas, he didn't really answer her question, although "hopefully now he's thinking about my question." But she didn't mind his refusal to hold the baby. 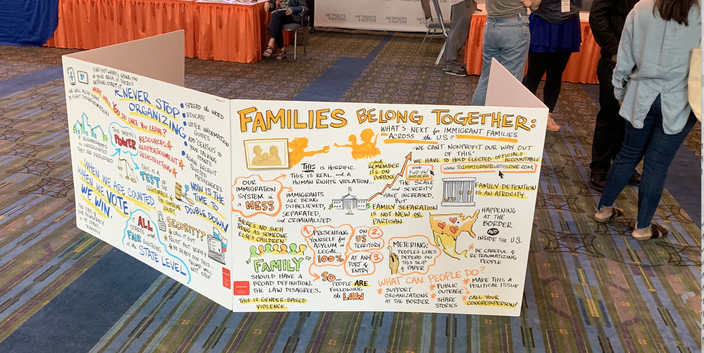 An issue board at Netroots Nation

"I actually have a lot of respect for him," she said. "He's a parent in the know, that you don't go and touch other people's babies."


Castro began his remarks by declaring that "instead of breaking up families we should break up ICE." He also vowed to address both gun violence and implement housing reforms, as well as climate change.

"I believe that we can both protect our planet and also create great jobs in the clean energy economy," he said. Castro also pointed to his record on LGBTQ rights, and said that he had passed such an ordinance as mayor of San Antonio – and had even fought to have transgender people included.

"We need to have a country where we have no second class citizens," Castro said, and reiterated comments he made in a recent presidential debate in which he insisted that the trans community not be excluded when it comes to reproductive rights.

Sen. Elizabeth Warren received the most vocal reception of the four, including "Warren" chants. The senator has been going to Netroots events for years, including during the team she was helping President Barack Obama work to establish the Consumer Finance Protection Bureau. She emphasized the need to build power "from the roots up."

"We have a government that works great – that works fabulously – for a thinner and thinner slice at the top," Warren said. She reiterated her desire to break up the big tech companies, and answered "oh, boo hoo" at the news that Facebook received a $5 billion fine this week for mishandling the personal information of users.

"They can be the umpire in the baseball game, or they can be a team in the league," Warren said of Amazon. "But you don't get to be both."

Warren also vowed to legalize marijuana, and "not just for those of you who thinks it's fun – not just you mellow folks in the back." On immigration, she vowed to both "stop this ugly mess at our borders" and even proposed investigations into abuse by immigration enforcement agents.

During her remarks, Warren was interrupted by a group of protesters, who unfurled a banner that read "Legalize 11 million, reunify all families," as one of them shouted at Warren to commit to legalizing undocumented immigrants. As seen in the video below, Warren continued to speak about immigration while the woman leading the protest was escorted out of the auditorium.

Once Warren was done speaking, a large percentage of the room emptied to try to get a glimpse of her, although the senator did not appear.

The final candidate was Gov. Jay Inslee of Washington, who has focused most of his campaign on the issue of climate change.

Inslee noted that he is the only candidate in the race saying "the climate crisis needs to be the top priority of the United States of America. If it's not job one, it won't get done."

The candidate had another, likely tongue-in-cheek proposal: He said that he would nominate Megan Rapinoe, the star of the U.S. women's national soccer team, as secretary of state.

In addition to the candidates' forum, Netroots Nation hosted a well-received panel earlier in the day with House Reps. Ilhan Omar, Rashida Tlaib, Deb Haaland and Ayanna Pressley. And Andre 3000, of Outkast, was spotted around the venue, playing the flute.