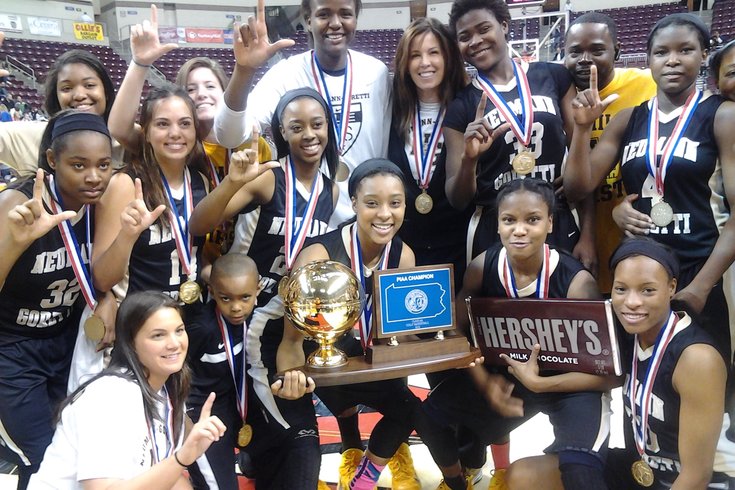 HERSHEY, Pa. — The dressing room was empty, except for Sianna Martin.

The Neumann-Goretti senior guard was looking for some courage. She touched the stitching across her jersey and a tear dripped down her cheek. For the final time, Martin was wearing a Saints’ uniform and it was beginning to sink in.

A season that began with sorrowful tears ended with bittersweet joyous drops on Friday, after Neumann-Goretti concluded a season for the ages by winning the school’s first PIAA Class AA girls’ state basketball championship with a dominating 79-34 victory over defending state champ Seton-La Salle at the Hershey Giant Center.

"People think we’re this team full of ghetto girls. We’re not. We play basketball like everyone else. We just happen to do it better."

The Saints finished with a perfect 30-0 record this season -- their 59-1 combined record over the last two years places them among the best high school girls’ basketball team to ever come out of the Philadelphia area -- and won the Catholic League championship, the District 12 championship and now the PIAA title.

And as the nation’s unanimous No. 1 team, according to USAToday, ESPN.com and CBS MaxPreps, they're the de facto national champions.

"This is a really special group of girls, especially with everything that they’ve overcome. These girls, this team is the No. 1 team in the country and they played like it today. They did everything I asked them to do. We defended, we shot well, rebounded well. I think it says even more about these girls after you think about everything that they went through.”

The season began with coach Letty Santarelli resigning prior to the first game and ended with Santarelli, who’s being inducted in the Neumann-Goretti Hall of Fame, being awarded a state championship gold medal by her former players.

“I don’t cry, but I can’t help it because of the way this year went,” Saints’ senior star C.C. Cryor said. “We all vibed together. This was a good way to go out, the best way to go out. We started the season with our coach telling us she had to leave, and by us winning this game, it all goes to Coach Letty. She started this program and she’s been a mother, a sister and a coach. For them to do a wrong thing to her, we all fed off of that.”

It was hardly a game. There were two lead changes, when Seton-La Salle took a 5-4 lead with 5:33 left in the first quarter, and Martin’s three-pointer with 3:41 left in the quarter gave the Saints a 12-10 lead, an edge that they never relinquished.

The Saints’ 24-0 run, from the middle of the first quarter until midway into the second quarter, essentially ended the game. They converted a 10-6 deficit to a 30-10 lead--while keeping Seton-La Salle scoreless for eight minutes.

The 45-point differential is the second-largest in the history of the state girls’ basketball championship, behind Penn Hills’ 86-39 victory over J.P. McCaskey in the 1990 Class AAAA state finals. The Saints’ difference was the largest, however, for any girls’ Class AA state final.

“We fought very hard during the season knowing everyone was against us, we know we didn’t get much love at home, but we came here to win,” Timbers said. “We knew the way we get back is by winning. People think we’re this team full of ghetto girls. We’re not. We play basketball like everyone else. We just happen to do it better.”

For Martin, the victory meant a little more. She is the only four-year starter in the program. The Towson-bound guard witnessed the program rise from mediocrity to the nation’s best.

“We were a team that was very disliked, and it bothered us, but at the end of the day, we’re the state champions, we’re the national champions,” Martin said. “It was hard taking that uniform off. I’ve been playing at Neumann-Goretti since my freshman year and I played my heart and soul out for this team. I was here from Day One. It’s why I was the last one out of the locker room and it’s why it took me so long to take my uniform off.

"This whole year was overwhelming. When I first started here, I had my doubts. I cried my eyes out when I took that uniform off. It was hard. But you have to move on. We had bad tears at first, good tears now.”