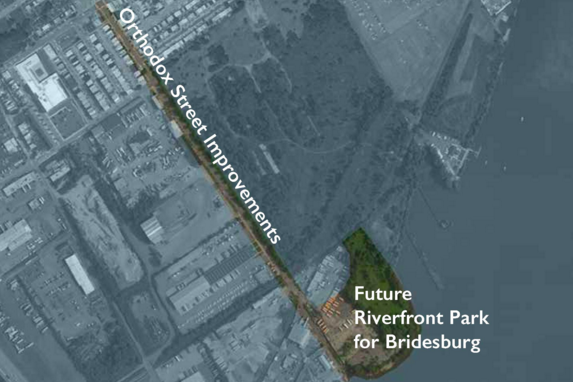 The location of a new park coming to Bridesburg.

You're about to get a new urban playground, Bridesburg residents.

In addition to green space and a lawn, the park will include a rain garden, meadow, stage, boardwalk, event plaza, trail head and river overlook spot.

Officials say the project has been developed through plenty of community feedback. The final plan will be presented at the American Legion Post 821 at 4404 Salmon St. from 6:30 to 8:30 p.m.

You can find out more about the new park here.

The new development, which was funded by the William Penn Foundation and designed by Locus Partners, follows the opening of an extension of Delaware Avenue that connects Port Richmond to Bridesburg across the Frankford Creek.

That stretch was the first new roadway opened in Philly in decades.

It's all part of a number of attempts to develop the River Wards neighborhood. The roadway was only the first phase of a two-part project.

The second phase, expected to be completed by 2018, will add a large sidewalk and shared-use path for cyclists and pedestrians, as well as new infrastructure.