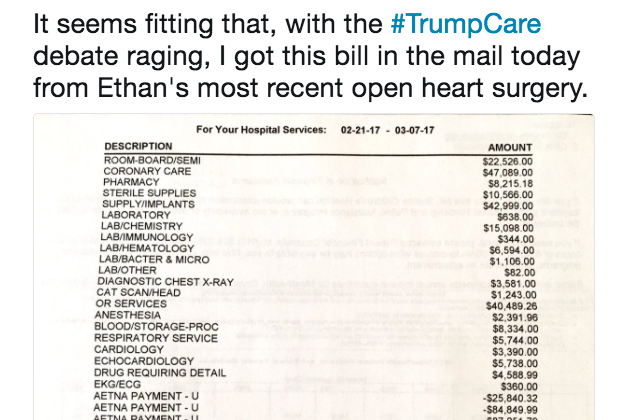 As the debate on a new health care bill rumbles on in Washington, D.C., a New Jersey mom is looking to shed some light on her daily life caring for her 3-year-old son, Ethan.

Alison Chandra took to Twitter last week to share a monstrous medical bill for Ethan, who was born with heterotaxy syndrome, a rare disorder where organs are formed in abnormal parts of the body.

"It seems fitting that, with the #TrumpCare debate raging, I got this bill in the mail today from Ethan's most recent open heart surgery," she wrote Friday.

It seems fitting that, with the #TrumpCare debate raging, I got this bill in the mail today from Ethan's most recent open heart surgery. pic.twitter.com/pyUE2UxbWW

In a separate tweet, Chandra broke down the expenses, finding that Ethan's 10-hour stay in the operating room at Boston Children's Hospital, one week in its cardiac intensive care unit and a week on its cardiac floor would topple $230,000 without insurance.

I'll save you some math; without insurance we would owe $231,115 for 10 hours in the OR, 1 week in the CICU and 1 week on the cardiac floor. pic.twitter.com/CQ9OjOsFX8

"It seems like our kids are being reduced to a line in a budget." For this mom, the health care debate is personal https://t.co/UnvwT5VeXl pic.twitter.com/V61xBetXRQ

The Senate's draft bill was unveiled last week after much anticipation from the GOP, about two weeks after the House passed its own measure that looks to repeal and replace the Affordable Care Act.

U.S. Sen. Pat Toomey, R-Pa., told The Washington Post last week that he is "likely" to vote for the American Health Care Act, which he called an "important and constructive first step" in doing away with Obamacare.

Senate Majority Leader Mitch McConnell hopes to get a vote on the Senate floor before the July 4 recess, Reuters reported Tuesday.