'We believe the founding of this country was divinely inspired,' elder says 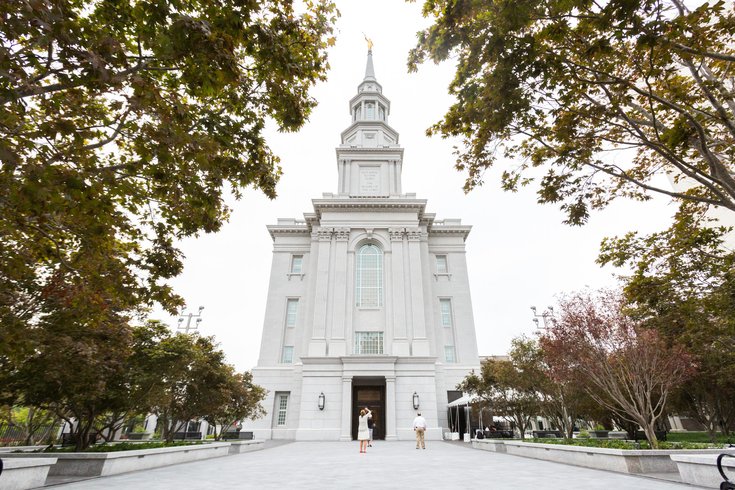 The Philadelphia Pennsylvania Temple of The Church of Jesus Christ of Latter-Day Saints, Aug. 1, 2016.

A large painting of Benjamin Franklin signing the Constitution hangs within the foyer of the new Mormon temple in Center City — just to the right of a portrait of a Jesus Christ, his arms stretched open to welcome visitors.

The image of the Founding Fathers might seem out of place in many religious settings, but it fits this room just fine.

"In our church, we believe the founding of this country was divinely inspired," Elder Larry L. Wilson told a group of visitors Monday.

The windowsills slope inward, as they do inside Independence Hall. The checkered floor tiles, wooden furniture and color motifs mimic those found in the late 1700s. And a huge, sparkling crystal chandelier — styled after one found in Independence Hall — hangs from the Celestial room, the holiest part of the new 61,466 square-foot building at 18th and Arch streets, just off the Benjamin Franklin Parkway.

"We wanted to honor the founding of the country," said Wilson, executive director of temple development. "The whole temple is almost like stepping back into the 1700s. It's like an Independence Hall version of an LDS temple. The furnishings, the fixtures, the colors — all the appointments in the temple — have really been drawn from buildings that were built in Philadelphia and in use during the 1700s."

Officially known as the Philadelphia Pennsylvania Temple of The Church of Jesus Christ of Latter-day Saints, the building will be dedicated on Sept. 17 — exactly five years after its groundbreaking and nearly eight years after the church announced its plans to build its 152nd operating temple.

Standing 208 feet tall, the Georgian temple is the first in Pennsylvania and will serve some 41,000 Mormons living in portions of Pennsylvania, New Jersey, Delaware and Maryland. Previously, church members had to drive to Washington or Manhattan to visit a temple. Hundreds of Mormons will use the Philadelphia temple each day.

"It's been very, very exciting," said Jenny Diehl, who watched the temple ascend while living in a neighboring high-rise with her husband, Peter. "To get the opportunity to walk by the temple site every day ... it's almost like you're with your baby and you're watching it grow and come to fruition. It's just really thrilling."

After its dedication, only Mormons in good standing will be permitted entrance. But the general public can tour the temple from Aug. 10 to Sept. 9 to learn more about its purpose and to view its ornate interior.

The temple was funded by tithes from Mormons throughout the world, but the church does not disclose the construction costs of its temples. But given the building's sheer size and the expensive materials used throughout, it is easy to imagine a figure totaling tens of millions of dollars.

The Cathedral Basilica of Saints Peter and Paul — another spectacular religious building — neighbors to the south. But unlike Catholic cathedrals, Mormon temples are not used for congregational worship, nor do they include a vast interior hall. Instead, their temples are filled with myriad rooms used for baptisms, weddings, Mormon instruction and individual meditations. But they are every bit as intricate and full of symbolism.

The higher one climbs within the four-story temple, the more ornamental its decor becomes, a purposeful dynamic meant to reflect an increasing proximity to God.

The wooden and tiled flooring used on the first two stories gives way to decorative carpets and rugs on the third and fourth. The column style evolves from Doric to Ionic to Corinthian the higher one ascends. And the chandeliers change from brass to crystal on the third floor.

Religious paintings of Jesus hang throughout the temple, but they also are accompanied by murals featuring the Delaware and Susquehanna rivers. Each Mormon temple includes depictions of its natural surroundings, but the images of the Susquehanna are religiously symbolic.

Mormon founder Joseph Smith was baptized by Oliver Cowdery in the Susquehanna River in 1829. A three-part mural depicting this baptism surrounds the temple's baptistry, a lower-level room where Mormons perform baptismal ceremonies for deceased family members.

The painting of Smith within the baptistry is unusual, Wilson said. Most baptistries do not include Smith, whom Mormons consider a prophet but do not worship.

Smith translated more than half of the Book of Mormon in Butler County, Pennsylvania, a historical fact that also is paid tribute immediately upon entering the temple.

A pair of decorative quills is positioned above a painting of Christ. One represents Smith's role in translating the Book of Mormon. The other represents the signing of the Constitution and Declaration of Independence.

"This temple is near and dear to my heart," said Josephine Scere, a member of the Philadelphia LDS Stake's Logan Ward. "They've done a really great job at staying true to the colonial feel in the city, which is sacred to us. We believe that the Constitution and the Declaration of Independence were inspired documents – and those men were inspired. They were imperfect, but they were inspired.

"For all of that to come full circle and have a temple built in the birthplace of the country is incredible. I believe that it was all meant to be. It all just makes perfect sense."