Police are searching for the attacker, who was driving a white Tesla Model X 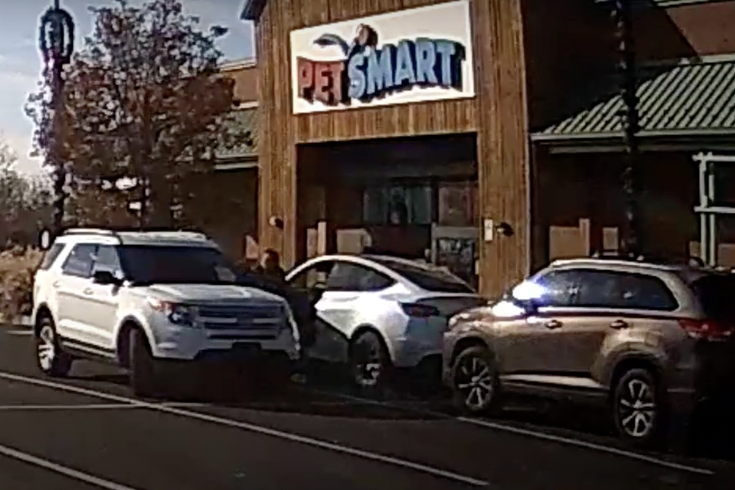 Police in Newtown Township, Bucks County are searching for the driver of a Tesla Model X who assaulted a woman at a PetSmart parking lot on Nov. 21. Police believe the suspect is a white man between ages 30-40 with brown hair and a possible accent.

Authorities in Bucks County are searching for a man who shoved a woman to the ground during a parking lot dispute last month outside a PetSmart store in Newtown Township.

The incident happened around 9:30 a.m. on Nov. 21 in the parking lot at 2600 S. Eagle Road. On Friday, investigators released security camera footage that shows how the incident unfolded.

A man driving a white Tesla Model X attempted to back into a parking space next to a white SUV facing in the opposite direction. As the Tesla backed in, a woman stood next to the driver's side door of the SUV, between the two cars.

After the Tesla parked, the driver got out of his car and shoved the woman to the ground. He then got back inside his vehicle and sped off from the scene. Police said a medium-sized dog was inside the Tesla.

It's unclear whether any words were exchanged between the Tesla driver and the woman prior to the assault. Another person who was at the scene initially did not appear to react to anything problematic happening as the Tesla backed into the spot, moments before the assault occurred. The person got into a brown SUV, which was parked behind the Tesla.

The parking lot was largely empty at the time of the incident. The Tesla driver began backing into the spot next to the woman's SUV from another space that was in an opposite row of spaces.

Newtown Township police described the suspect as a white man between ages 30-40 with brown hair and a possible accent.

Investigators did not say whether the woman suffered any injuries.

Anyone with information about the Tesla driver is asked to submit an anonymous tip to Newtown Township police.