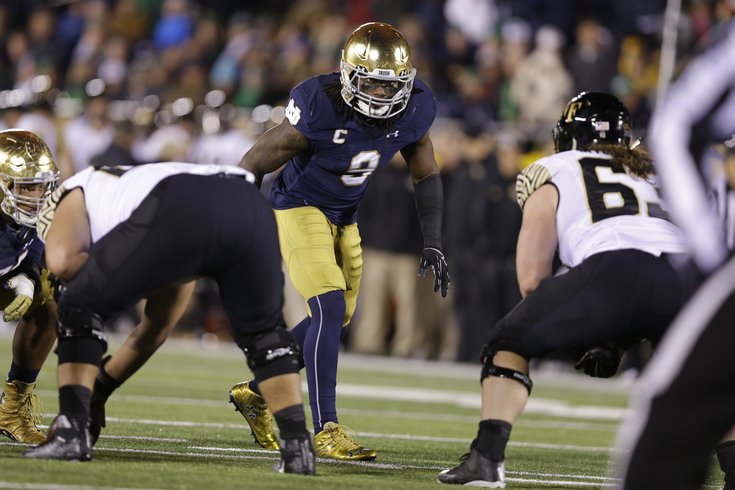 Jaylon Smith could be a really good player in the NFL, if you know, he actually plays.

In case you missed our first round grades, you can find them here. Let's get right to our grades for rounds two and three, listed in order of draft position on Day 2:

The Cowboys reportedly wanted to draft Oklahoma State DE Emmanuel Ogbah in the second round, but he was the taken with the first pick on Day 2. They then turned their attention to Clemson's Kevin Dodd, who again, got swiped out from under them. With their top two targets in the second round gone, the Cowboys had to settle for Smith.

A year ago, the Cowboys took a top 10 type of talent in the second round last year when they selected DE Randy Gregory, who slid because of character concerns. In his rookie season, Gregory had 11 tackles, no sacks, and he's suspended without pay for the first four games of the 2016 regular season for violating the NFL Policy and Program for Substances of Abuse.

In 2016, the Cowboys selected another major risk in the second round, this time an injury concern in Smith. On January 1, Smith tore his ACL and LCL. Under normal circumstances, Smith would likely recover in time for the 2016 season, however, his injury is more serious because he suffered nerve damage.

A lot has been made of the fact that the doctor who performed the surgery on Smith is the Cowboys' doctor, and therefore the Cowboys have "inside information" on his knee.

That's certainly one way to look at it. Another way to look at it is that is that the doctor who performed the surgery is far more likely to be bullish on his full recovery than an outside party who is looking at Smith's knee more objectively. The surgeon himself might be the worst possible person to trust.

If Smith has a full recovery, he could be a steal for the Cowboys from 2017 and beyond. If not, it could be a completely wasted pick at 34th overall, where you cannot afford to have misses.

Collins is thought of as a quick, penetrating interior defensive lineman. However, his production at Nebraska was lacking:

Collins had just eight career sacks, and no forced fumbles. In a draft stacked with DT talent, the Cowboys got a player here they may have gotten in the fourth round.

Shepard really impressed me at the Senior Bowl. In my opinion, he was the most explosive receiver in Mobile, getting behind the defense for a number of deep completions, and showing YAC skills after he had the ball in his hands.

At Oklahoma, Shepard was productive for four years, with his senior season being by far the best:

The Giants' offense has not been the same since Victor Cruz's career has stalled. Shepard will give the Giants a guy who can work the middle of the field the way Cruz used to.

Getting the ball-hawking Thompson in the third round was good value for the Giants. Throughout his college career, Thompson had 19 interceptions. He also has great size, at 6'2, 208, and can play in the box.

As a player, Cravens is one of the trendy LB/S hybrids in the same mold of the Cardinals' Deone Bucannon. His mental makeup, however, has both been praised and criticized. On the one hand, Cravens is thought of as a highly instinctual player with a nose for the football. On the other hand, I was told he interviewed horribly, and even told teams that he did not like practicing.

Cravens' production at USC was good:

The Redskins need help at all three levels of their defense. Assuming he can stay focused during the looooong grind of an NFL season, Cravens can be a productive player.

Heading into this past college season, I thought Fuller was just as good as his brother Kyle Fuller, who was drafted 14th overall by the Bears in the 2014 NFL Draft. The two brothers have similar styles of play in that they're both physical corners, who are also sticky and make plays.

Unfortunately for Fuller, he tore his ACL Week 3 last season, hence his slide into the third round. If Fuller recovers fully, this could be a good value pick.

The Eagles of course didn't have a second round pick, because Chip Kelly traded it for below average starting quarterback and crybaby Sam Bradford.

In the third round, they grabbed a rare player who can play all five positions along the offense line. Seumalo's primary position is at center, where he has started since he was a freshman. In his sophomore season (2013), he moved to RT for two games after Oregon State suffered injuries along their offensive line. He broke his foot at the end of the 2013 season, which cost him the entire 2014 season. In 2015, Seumalo played RG and LT.

In Philly, Seumalo will be given the chance to win a starting job over incumbant Allen Barbre and free agent acquisition Stefen Wisniewski. Personally, I had Seumalo pegged as a target of interest, but thought he'd be better value later in the draft. Still, the Eagles desperately needed offensive line help, and Seumalo gives them a lot of positional versatility.