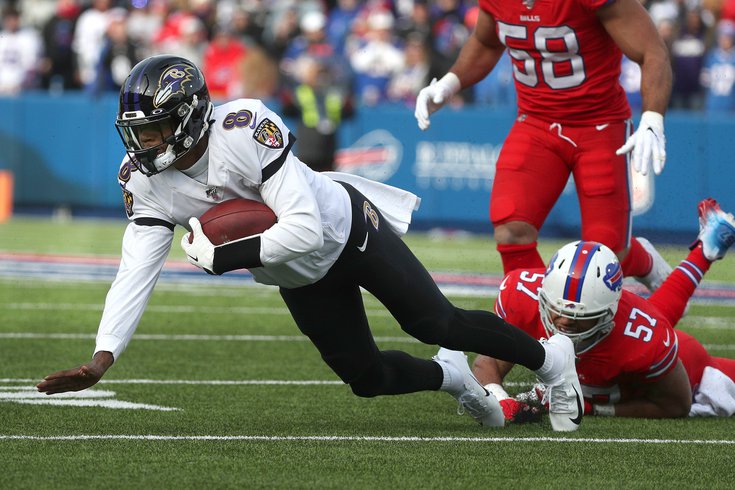 The Bills or Ravens could be the AFC's best chance to beat the Chiefs this postseason.

The NFL is down to its elite eight, after a marathon of six playoff games this past weekend gave everyone their football fix, and then some.

There are only three more weeks of games left for those who need their gambling fix, and as a service to you, our sports-loving readers, we've compiled some insight for each of the playoff rounds as we break down the spreads (courtesy of TheLines.com) for every divisional round game.

The winners from this weekends slate will face off next week for the right to go to the Super Bowl. Here's a look at what's on tap, as well as start times and broadcast info. And no, there is no Nickelodeon game this week, unfortunately.

The well-rested, NFC-best Packers are heavily favored here, and it makes total sense. In addition to having the best record in the conference, they boast the likely MVP in Aaron Rodgers (48 TD, 5 INT) and a high-powered offense that has virtually unstoppable weapons on the ground (Aaron Jones) and in the air (Davante Adams).

The Rams' defense almost single-handedly helped lift injury-plagued L.A. past the Seahawks last week and if they want any chance of pulling off the upset, it will rest on that side of the football as Aaron Donald will reportedly suit up and play despite torn rib cartilage. It is doubtful Jared Goff will be 100% either, making Cam Akers and the ground game huge on the Los Angeles side. Their ability not only to score, but to keep the ball out of Green Bay's hands is a key to victory.

This game is, in this writer's opinion, the marquee match up of the second round. The quarterbacks in this game, Lamar Jackson and Josh Allen, have combined for over 1,400 rushing yards and 15 total touchdowns during the regular season — and nearly 200 yards and two more scores in their respective first round wins. Allen, in addition to using his legs, has a dynamic passing attack at his fingertips, most notably with Stefon Diggs looking to continue his beast of a season after leading the NFL in receptions and yards. Jackson has an arm to be sure, but Baltimore lives and dies with their ground game and the team ran for more than 200 yards when they beat the Titans last week.

Will either of these two defenses be able to step up and make a key stop or turnover? Baltimore's secondary has stepped up down the stretch as they secured their playoff berth late in the season and the Bills D is nothing to sneeze at either. An over/under of just 50 is begging to be gambled on, as this could be quite the shootout.

Can the Browns shock the world again? No one really expected them to be ahead 28-0 after the first quarter against the favored Steelers in Pittsburgh last week. And no one, similarly, expects them to have much of a chance against the NFL's best team in Kansas City this coming Sunday.

Anything can happen, but it seems pretty clear that a rested Patrick Mahomes and a full compliment of weapons on offense (like Travis Kelce and Tyreek Hill) can carve up the Browns defense — which may improve with a few players being cleared from the COVID-19 list this week. While 10 points seems like a lot, the Browns being able to post 40+ points in back-to-back weeks also seems like a lot, but that is what it'll probably take to overcome the Chiefs. If they're able to unleash both Nick Chubb and Kareem Hunt, watch out, they may be upset hunting again.

This game really feels like a pick-em. Without a Superdome full of fans, the home-field advantage isn't as big as usual for New Orleans, which was dominant on both sides of the ball this past Sunday against the overwhelmed Bears. Their defense will have a much taller task slowing down the ageless Tom Brady as he looks to propel a second franchise to the Super Bowl.

Brady, like Brees, spreads the ball around, but the Bucs do not have a running back like Alvin Kamara, and his versatility and superiority on the ground may be the deciding factor, and perhaps why there is a slight edge in the Saints' column. It could be the closest of the quartet of games and is a fitting finale.