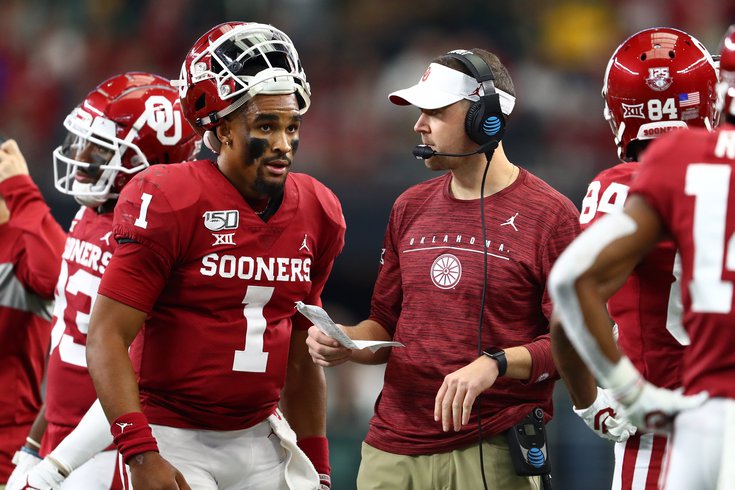 The Philadelphia Eagles' head coaching job search is underway, and one of the first potential candidates that the Birds reached out to was Oklahoma Sooners head coach Lincoln Riley, according to a report from Ed Kracz of Sports Illustrated.

It isn’t the first time the Eagles have talked to Riley about his potential interest in the Eagles. In fact, he and general manager Howie Roseman have a good relationship and it was a consult with Riley that helped sway the Eagles to draft both Jalen Reagor and Jalen Hurts, per sources.

Joking aside, Riley is arguably the best coaching candidate from the college ranks, as he has racked up a 45-8 record at Oklahoma, while developing a pair of No. 1 overall quarterbacks in Baker Mayfield and Kyler Murray. Riley also coached Jalen Hurts for one year, and Hurts finished that season as the runner-up in the Heisman voting.

A look at the numbers that quarterbacks have put up in Riley's extremely quarterback-friendly offense:

The Sooners made the College Football Playoff in each of Riley's first three seasons, losing all three first round games. In 2020, they did not make the cut after finishing with a 9-2 record, and instead played in the Cotton Bowl. In the four bowl games that he has coached, Riley's offenses averaged 41.3 points per game.

Riley is thought of as an innovative offensive mind, whose schemes have been stolen by many NFL offenses. You can get a little taste of what Oklahoma does here, in the run game:

And in the passing game:

The Eagles' open head coaching job shouldn't be appealing to top candidates. The quarterback spot is unsettled, the roster is bad otherwise (and has little chance of getting better anytime soon because of an awful cap situation), and there will be rightful concerns about a history of head coaches having friction with team brass.

However, if Riley is comfortable with Hurts, and he has a good relationship with Roseman as is being reported, perhaps he won't see the warts that we do. The bet here is that it would still likely take an enormous sum of money to extract him from Oklahoma.