With Pederson gone, Lurie leaves door wide open for Wentz to be back with Eagles

But the Eagles owner admitted that the final decision should be left up to Roseman and Co. 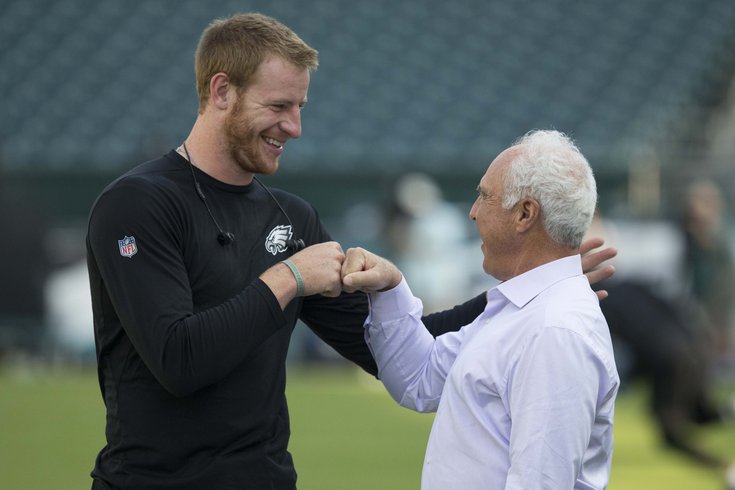 It didn't take much time following the firing of Eagles head coach Doug Pederson for sportswriters and fans alike to ask the obvious question: Does this mean Carson Wentz is definitely staying now?

Wentz, of course, through a leak, may have (probably did) say he would demand a trade if he was not the starting quarterback in 2021. Other rumors and reports suggested that the relationship between Wentz and Pederson was "fractured beyond repair."

So did owner Jeffrey Lurie have an ultimatum on his hands?

We will never know the true answer to that, but NFL Network's Ian Rapoport provided some insight (h/t 94WIP).

"The other part of this involves Carson Wentz," Rapoport said speaking about the Pederson firing. "From what I understand, Carson Wentz would not have wanted to be back in Philadelphia had Doug Pederson come back. He did not feel there was any sense in continuing that relationship and did not think he was going to get better as a football player and just didn't want to do it.

"The fact that Pederson is now out does increase the chances that Carson Wentz is back. The reality is, the best-case scenario for the Philadelphia Eagles and whoever the new head coach is for Carson Wentz to go back to being a really good quarterback. From a financial sense for them, for Carson Wentz, for everyone that would be the best case scenario. It will be on the next head coach to make that happen."

It's true, that the easiest solution to the Eagles quarterback controversy is for a new head coach to come to Philly, embrace Wentz, fix him somehow, and make the millions of dollars guaranteed to the 28-year-old quarterback worth the money.

That someone can fix Wentz is a big assumption. But it's apparently one that owner Jeffrey Lurie is willing to make and one he shared when asked if Wentz would return in 2021. (Keep in mind that Lurie talks...a lot.)

"This kind of decision has multiple variables," Lurie said, when asked if the Wentz situation played into decision to fire Pederson. "But it's not based on a quarterback or a particular position group. Certainly, you have to look at the regression of our offense. This is a league that scored the most points ever in 2020, a league that started calling [less] offensive holding and offensive pass interference, and yet we were 31st in offense."

"You all know me — I put a heavy emphasis on wanting to have an elite offense and I feel like defense has variations throughout the year, but if you wanna be a dominant team you have to be a top offensive unit. It's hard for me to project that at the moment, but it's multiple variables.

"I don't think any owner should decide [if Wentz will return]. Carson, to me, to virtually everybody in our organization, is a quarterback who in his first four years was in many ways elite... In his fifth year, obviously not satisfactory for whatever reason; there are probably multiple reasons for that. I think the way I look at it, we have an asset and a talent, he's a great guy who wants nothing but to win big and win Lombardi Trophies for Philadelphia. This guy is tireless, he has his heart in the right place — he's just what you want.

"It behooves us as a team with a new coaching staff to get him back to that elite progression… at the same time understand there have been many quarterbacks in their fourth and fifth years, if you trace this you can come up with many many quarterbacks who have had a single year, the touchdown-to-interception ratio was not what you want, and we are talking some great ones like Peyton [Manning] and Ben [Roethlisberger].

"I am taking a longer view, this was not the best season for our offense."

Okay, a lot to unpack there.

First, that Lurie is mitigating the effect of Wentz's bad play on the team is a big indication of his support for the quarterback, as is, obviously, his citation of similar regressions in elite quarterbacks.

It's also interesting that Lurie calls Wentz an "asset," which is no doubt language that is used in the front office as they weigh whether or not to pursue a trade (which, as has been mused endlessly, would cost the Eagles a pretty penny in dead cap).

Lurie makes a claim that seems empty, at least to those who have watched the last few seasons closely when he said that he didn't think "any owner should decide" who the quarterback should be. Clearly, even if he will not own up to it, Lurie has a ton of influence on his team and it is incredibly doubtful he has not made clear his stance on Wentz to the team's front office. In meetings with potential head coaches, fixing Wentz will surely be one of the main topics.

It's also interesting that Jalen Hurts' name was not brought up once in Lurie's lengthy answer, and did not come up until almost 20 minutes later when Lurie was asked about Week 17's benching of Hurts for Nate Sudfeld.

With Pederson gone, one can kind of read the tea leaves that the head coach favored, and coached better when Nick Foles was playing, and felt incredibly uncomfortable making the decision to bench Wentz as the ugly 2020 season dragged on. It might be presumptive to declare there was a rivalry between the two. Still, one can't help but come to a conclusion that if there was, Wentz won.

One thing is undeniably true, if Wentz does return in July to try and reclaim his old job, he will be under the most pressure of his entire career. Whether or not that bodes well for Wentz is anyone's guess, but Lurie is confident.

"It's very fixable," Lurie said. "I fully expect him to realize his potential."