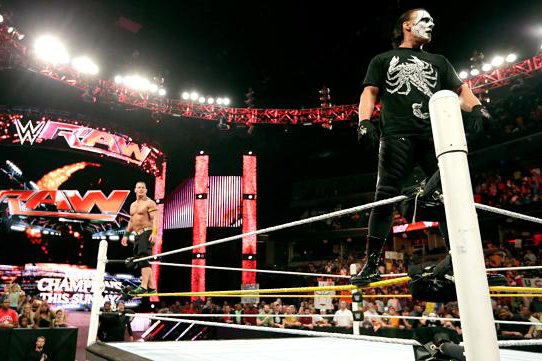 Sting and John Cena could leave Seth Rollins without a championship on Sunday night.

Every September, WWE’s Night of Champions has the unfortunate responsibility of following up the biggest party of the summer, SummerSlam, but this year they’ve tried to outdo themselves. Having Sting vie for the WWE World Heavyweight Championship, John Cena trying to regain the United States Championship, Seth Rollins pulling double duty, and the possibility of Kevin Owens winning his first championship as a member of the main roster, this card has the ability to be one of the best Night of Champions events ever.

While matches like Dolph Ziggler/Rusev and the fear of Nikki Bella retaining her Divas Championship might mar an otherwise stacked card, I have a feeling we’ll be pleasantly surprised at 11 p.m. on Sunday night when Night of Champions goes off the air. WWE tried pulling out all the stops on Raw’s season premiere this week, and it didn’t translate at all to the audience. Seeing Sting wrestle on Raw was cool, but not earth-shattering. I have a feeling the writing team will bounce back and the producers will put together some great matches with the talent to appease us fans just looking for something – anything – to get excited about in professional wrestling.

I’m looking for a big angle to serve as a cliffhanger for Monday Night Raw the next night. I’m not sure what, but I just have a feeling we’ll be talking about this show for a while.

Here’s what I think will happen Sunday night in Houston at the Toyota Center:

Neville and Lucha Dragons vs. Stardust and The Ascension

This match was hastily put together on Raw, and the main feud here is between Neville and Stardust. Despite a couple throwaway matches the past few months between the two on Raw and SmackDown, these two really haven’t taken their feud to the next level, and I’m not sure why WWE has plugged in others around this feud.

SummerSlam saw Stephen Amell and King Barrett involved, where the real feud was between Stardust and Amell. Neville, who’s been at odds with Stardust since the early days of summer, really hasn’t been showcased the last few weeks, leading me to believe he’s either injured or masking an injury. The guy can go in the ring, so WWE should be utilizing him on both Raw and SmackDown each week. Another Kickoff Show match in which I don’t care who the winner will be. But I’ll pick anyway.

Your winners: Neville and Lucha Dragons

With Lana on the shelf for a few months with a wrist injury, I came up with an angle in my head that I didn’t think would happen, but now it wouldn’t surprise me if it did. On Raw, Ziggler distracted Rusev by coming down to ringside and giving Summer Rae a gift box, then hopped into the ring and superkicked Rusev. Backstage, we found out this wasn’t just a setup by Ziggler.

But what if this was the beginning of a double turn? I could see Ziggler trying to destroy Rusev and Summer Rae’s relationship, becoming a heel in the process, while Lana is on the shelf. Because why the hell not? It could make sense. Summer Rae could join Ziggler and Lana can come back when she’s ready and reunite with Rusev ala Macho Man and Elizabeth at WrestleMania VII.

Really, the best part of this feud is you thinking about how you would book it to make it better because this feud hasn’t entertained me in the least. What I booked in my head in the last paragraph would be awesome, so I hope that happens. No winner at SummerSlam means Rusev gets the win somehow here.

While I love the Dudleys returning to WWE to give the Tag Team division a much-needed boost, it’s certainly not time for New Day to lose the Tag Team titles, especially after re-capturing the gold last month at SummerSlam. They’re red hot right now and have been featured in main event segments, so that cannot end anytime soon. They’re really playing to their strengths as heels – nobody in the crowd seems to like them, but they’re awesome and entertaining and I can’t help but like them.

As for the Dudleys, I’m not sure taking a pin would help them since they just returned. Some chicanery should happen, and that’s fine because New Day are heels and I really couldn’t care less how they win, as long as they keep winning. I’d eventually like to see the Dudleys recapture the Tag Team titles, but not right now. They can wait until New Day cools off… if they ever do.

But if I’m wrong, and WWE decides to put the titles back on the Dudleys that quickly, I won’t be happy.

Well, this feud has been terribly built up, to no fault of Owens. Ryback’s been lost in the shuffle since getting a staph infection in his knee and being a relatively idle Intercontinental Champion. It’s time for him to drop the title and Owens would be a perfect fit for it.

Granted, Owens should have won the United States title from John Cena, and he’s become just a regular guy on the main roster because WWE refuses to build new superstars because they’re more worried about elevating their brand than single wrestlers, but having any other outcome in this match than Owens walking away with the gold is a bad move. Ryback has literally done nothing with the title, and he’s gotten kind of boring. He still gets a reaction, and fans seem to dig him, but he really doesn’t do much. His matches are slow and plodding, and he would be better suited in a main event slot for a while, and even a WWE World Heavyweight Championship reign, eventually.

Give Owens the gold. Now.

Roman Reigns, Dean Ambrose and a Mystery Partner vs. The Wyatt Family

WWE will go one of two ways with this, and the diminishing hope I have for them to give the audience what they want leads me to believe we’ll not be very impressed with Reigns’ and Ambrose’s partner. We have guys who aren’t in a match such as Big Show, The Miz, Cesaro and Jack Swagger [remember him!?], who might just be called on to fill a role Sunday night.

Or WWE could try to surprise the audience and have a legitimate “Wow!” moment to build upon. I’ve heard rumors Kane may return as the mystery partner, but that doesn’t make a whole lot of sense in terms of storylines. However, WWE can easily ignore that Kane was ever a part of The Authority because they’ve dropped angles and storylines with no rhyme or reason in the past. While I doubt they do that in this case, part of me would be very intrigued seeing someone like Kane as the mystery partner. Or Brock Lesnar. Or Daniel Bryan. Fingers crossed.

Your winners: Reigns, Ambrose and their partner

Since their match on Monday Night Raw ended with a Dusty Finish, and Nikki finally has broken A.J. Lee’s record for longest-reigning Divas Champion in history [not a long history, anyway], it’s absolutely time to really start the Divas Revolution and have Charlotte take the title from Nikki. If Nikki walks away with the Divas title on Sunday night, the Divas Revolution might as well be officially dead.

It’s time for the change. NXT is making that change on October 7th by featuring a 30-minute Iron Woman Match between Bayley and Sasha Banks at NXT TakeOver: Respect. The main roster needs to follow suit and having Nikki continue to hold onto the title and having mediocre match after mediocre match isn’t doing much for her or the title. We’ll be celebrating a new Divas Champion on Sunday night, or else we riot. Did I do that right?

I see this bout taking place maybe around the 9:00 mark of the evening since I don’t think Rollins will open the show and I don’t think he will wrestle back-to-back, either. Rollins has been OK as a double champion so far, but I’m kind of over it at this point, not even a month into his reign.

I miss Cena’s weekly United States Open challenges, and I’d like to see the next United States Champion defeat Cena on Raw during that challenge. It would be the kickstart the midcard needs to hopefully get the credibility of the title back up to where Cena had it before losing it to Rollins at SummerSlam. I wouldn’t be upset of Rollins retained the title here, but I think Cena’s been a better champion and deserves another reign just to drop it to someone like Owens. Maybe Owens can be the Intercontinental and United States Champion at the same time? Sign me up.

Honestly, I would be impressed if WWE decided to run with Rollins wrestling back-to-back, but then there would be no logical reason to not have Sting win the WWE World Heavyweight Championship facing an already beaten down Rollins.

Could this happen this Sunday as @Sting faces @WWERollins for the World Hvt. Title? #RAW #WWENOC pic.twitter.com/eHFeV7Epz8

Rollins tapped out to Sting’s Scorpion Death Lock on Raw, so that visual alone would pretty much guarantee Rollins retains his championship on Sunday. Would it make much sense to have him lose the United States title back to Cena and then defeat Sting? Probably not, but there’s going to be something bigger at work here, and I think Rollins will ultimately be the afterthought after the main event.

I said earlier a big angle will take place at Night of Champions, and that’s my gut talking. Someone will interfere either on Sting’s behalf or against him, and that’ll be the story of the night. It’s hard to think Sting will win his first WWE World Heavyweight Championship with seemingly little build and the fact that he’s in his 50s. I’m not sure he’ll ever hold the title, but if he is, there may not be a better time than right now. I’m sticking with the champion because I won’t believe Sting as champion until I see it. And then rewind it and see it again.

The card looks good, and WWE needs to produce a high-quality show to get fans re-invested into the product after the long summer. SummerSlam’s the unofficial end of summer, and Night of Champions begins the road to the road to WrestleMania. A big show would do wonders for WWE heading into the fall.

I’ll have my Night of Champions review right here at The Philly Voice on Monday morning. Enjoy the show!