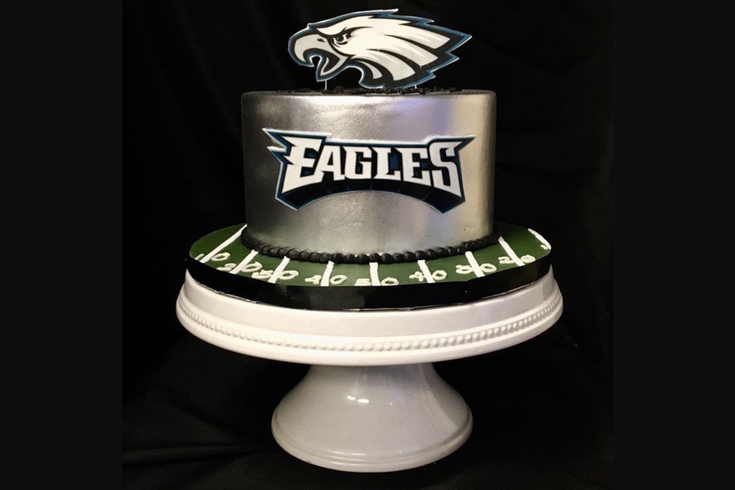 The Night Kitchen Bakery in Chestnut Hill is selling Eagles-themed desserts, like this three-tiered cake, in honor of their playoff success.

A Chestnut Hill bakery is showing off its Eagles pride by serving cupcakes, cookies and cakes that celebrate the Birds' playoff success.

"When the Eagles have success, our customers get excited," said Amy Edelman, owner of The Night Kitchen Bakery. "They love the Eagles creations that we make."

The Eagles-themed cupcakes, created by chef Jackie Swain, are among the bakery's most popular treats. They are made with yellow cake and topped with a chocolate icing nest and coconut cream cheese shaped into a bald eagle head.

The bakery also is selling vanilla shortbread cookies with the message, "No one likes us, we don't care." Other cookies read "Eagles" and "Philly."

Eagles fans can order custom cakes to serve during Sunday's NFC Championship Game against the San Francisco 49ers, too. The cakes are made with a funfetti mix and vanilla frosting.

The bakery, which has been around for more than 40 years, is known for its lemon curd cake, a dessert layered with yellow cake and fresh lemon curd, topped with a cream cheese frosting. The bakery also sells brownies layered with buttercream frosting and a chocolate ganache, topped with white chocolate.