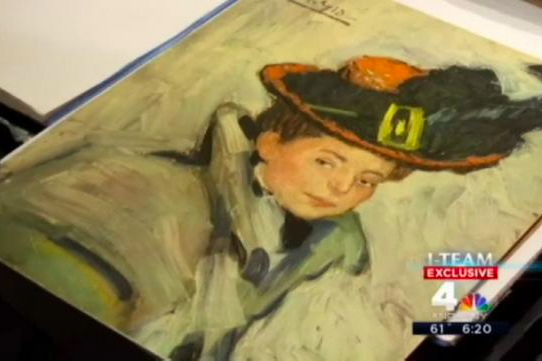 After multiple attempts to verify the authenticity of a long-lost painting by Spanish master Pablo Picasso, a Staten Island man who found the work of art in his aunt's crawlspace may be on the verge of receiving a $13 million appraisal.

Carl Sabatino, a broadcast executive, first learned of the painting in 2004 when his aunt, Jenny Verrastro, told him from her deathbed to look for it underneath her sewing machine in the crawlspace of her home, The Daily Mail reports.

Sabatino, who remembered the painting hanging on Verrastro's wall as a child, learned that it was purchased by his uncle, an American soldier, from a London street vendor for the equivalent of $15. He believes the painting was obtained by the street vendor from a bombed or looted gallery.

For more than 10 years, Sabatino has devoted his energy to proving that the painting is a recreation of Picasso's "Woman With a Cape," made by Picasso himself years after the original – which hangs today at the Cleveland Museum of Art – was completed in 1901.

When Sabatino noticed Picasso's signature on the painting, he took it to an expert at Christie's in New York, who immediately dismissed it as a ripoff. Convinced that the color print – a rarity in Europe during World War II – meant it came from someone who would have had access to high-end tools, Sabatino pressed on.

Research led the Staten Island man to the discovery of evidence that Picasso employed a color printing technique using gum bichromate around 1936. Armed with a new theory, Sabatino brought the painting to an art expert to analyze the material. Pigments extracted from the painting and studied under a microscope revealed that the material was consistent with what was used in the 1930's.

A partial thumb fingerprint was also found on the painting, which is under review by a forensic expert in Washington for comparison with a plaster cast of Picasso's hand.

At least one world-renowned art appraiser, Richard Beau Lieu, of Boynton Beach, Florida, has valued the painting at $13 million.

The value could shoot up significantly if the forensic analysis reveals Picasso's thumb print was preserved with the painting. For Sabatino, the quest to find the truth about the painting has been a treasure hunt and a testament to his family's care in handing down the heirloom.