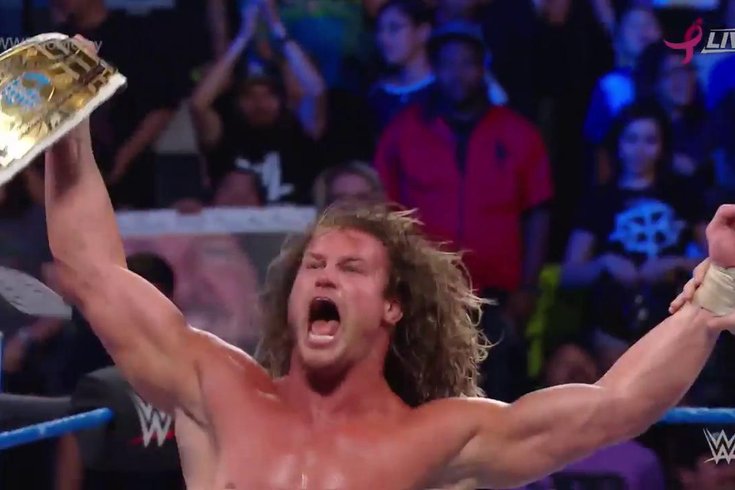 Dolph Ziggler celebrates after overcoming the odds and becoming the Intercontinental Champion for a fifth time Sunday night.

In a truly unique pay-per-view offering, No Mercy was another home run for WWE’s SmackDown brand on Sunday night. There were a few advertised matches that didn’t happen and match times were switched around, but overall, it was a solid effort by WWE. Three matches pretty much carried the pay-per-view, and there was maybe one match that was less than good. I’ll take that every time.

Curt Hawkins, who was scheduled to make his television re-debut during the Kickoff Pre-Show, made an announcement that he’d actually be making his in-ring debut this Tuesday on SmackDown. Bummer.

Let’s delve into what else happened at the Golden 1 Center in Sacramento, Calif. Sunday night:

These are the norm now for SmackDown shows, I guess. An eight-man tag team match kicked off the in-ring action Sunday night, and the Corbin-Swagger match was bumped to the main card. This was your typical run-of-the-mill eight-man tag we’re so used to seeing. Nothing special.

Gable and Jordan hit Grand Amplitude on Aiden English for the win.

Maybe now American Alpha will be given a more prominent role on the show.

Earlier in the day, WWE announced via Twitter that this match would kick off the main card of No Mercy. In all likelihood, WWE wanted to avoid the biggest match of the night going head-to-head with the second Presidential Debate. Some people labeled WWE as “afraid” of having the main event go on last due to the debate, but I think it was a smart move. WWE’s main objective should be to maximize their audience, and having the main event on before the debate began was doing exactly that.

It was smart, and there’s no reason to be upset with that decision.

As for the match, it might actually be one of the best matches of the year. This included everything that highlighted each individual perfectly. John Cena hit his spots. Dean Ambrose hit his spots. And the WWE World Champion, AJ Styles, hit his spots. One of those spots included a ring apron suplex by Styles to Cena, something we don’t see a lot of in WWE. While there’s been an increase in ring apron bumps, I’m not a big fan of it. There’s more opportunity for the performers to get hurt and it doesn’t really add much to the course of a match. But far be it from me to tell ring veterans of 20 or so years what to do.

There was a great sequence in the match where each guy hit some of their signature moves which ended with Ambrose locking in the Calf Crusher to Styles and Cena coming in and locking in the STF on Styles. While the champion tried to fight it, he couldn’t fight it very long and wound up tapping out.

The referee couldn’t declare a winner due to both Ambrose and Cena having submissions locked in, so he continued the match. With no disqualifications in Triple Threat matches, Styles used the rules to his advantage and struck Cena with a chair in the gut and then the back. Styles covered a prone Cena and got the three-count to retain his championship.

Styles talked to WWE.com after the match.

This feud has been brewing for a while now, and Carmella’s new mean streak is exactly what her character needed to spark her on the main roster. A win over Nikki Bella on pay-per-view seemed like the next logical step.

Except that won’t be this month. Even though Carmella was able to lock the Code of Silence on Bella’s surgically-repaired neck, that wasn’t enough to defeat the former Divas Champion. Bella got to the ropes and hit the Rack Attack 2.0 a little bit later for the win.

Stay tuned on this one. This feud most certainly isn’t over.

Heath Slater/Rhyno (c) vs. The Usos

The Usos are finally being utilized in a spot where the audience cares about them again, butof course they had to lose to the thrown together tag team of Heath Slater and Rhyno on Sunday night.

The Usos looked close to winning various times during the match, especially when Jey Uso had Slater in the Tequila Sunrise submission hold. However, Rhyno was able to save the match for himself and Slater, eventually hitting Jey with the Gore to retain the tag titles.

I know it’s only one loss, but I can’t help but think about how Raw has been using Luke Gallows and Karl Anderson – who should be Raw Tag Team Champions right now – and think the same fate awaits Jimmy and Jey Uso. American Alpha notched the win for their team on the Kickoff Pre-Show, so an Usos win here and an eventual feud between the two teams for the tag titles is ideal.

We just won’t be getting that yet. Hopefully, we will soon because that’s the best tag team feud this roster could have.

Jack Swagger defeated Baron Corbin last Tuesday on SmackDown after the referee thought Corbin was tapping out to Swagger’s Patriot Lock, though he professes he was reaching for the ropes in order to break the hold. On Sunday night, Corbin used the vision, or lack thereof, of the referee to aid him in defeating Swagger.

Corbin gouged Swagger’s eyes with the referee’s back turned and hit End of Days for the victory.

If Ziggler loses, his WWE career is over

With the Triple Threat for the WWE World Championship being the first match on the pay-per-view card, I thought this match would get the main event treatment. Unfortunately, it didn’t.

But it was one of the best matches of the year, for sure. The drama surrounding the match with the storyline laid out for weeks was absolutely tremendous. This is why I love pro wrestling. Yeah, it’s scripted and everyone knows that. But it’s all about the story and the drama.

At one point, I thought Ziggler would actually pin himself accidentally while executing a sleeper hold on Miz.

It turns out I was just overanalyzing the positioning of the hold and Ziggler’s shoulders were never down clean on the match. Phew.

However, Ziggler was left to be beaten various times Sunday night. Maryse sprayed him in the eyes with a substance. Kenny and Mikey from the Spirit Squad returned and tried to interfere. Miz took off the top turnbuckle and Ziggler hit the metal hard. Despite all of these things working against Ziggler, which included a gnarly knee injury selling job after Miz locked in the Figure Four, the four-time Intercontinental Champion notched his fifth title victory after hitting Miz with a superkick.

If you haven’t watched this match yet, I highly suggest you go out of your way to do so soon. It’s one of the best I’ve seen in a long time. The drama, the crowd reaction after the match, and the importance WWE placed on it with their video packages made it so unique. We haven’t seen something like this in a long, long time.

Ziggler will hopefully have a long reign and continue on this hot streak as one of SmackDown’s best wrestlers. He deserves it.

The Miz was sad. Daw.

On the Kickoff Pre-Show, it was revealed that Becky Lynch would be unable to defend the SmackDown Women’s Championship against Alexa Bliss due to some unconfirmed medical issue. Lynch tweeted out this picture during the pay-per-view in which she appears to be in a hospital.

Thank you all for the thoughts. I promise I'll do everything I can to get back ASAP and defend my title... I'm watching closely tonight pic.twitter.com/SWT8QLK9r0

Hopefully Lynch recovers quickly, but she hasn’t been stripped of the title so the thought is that WWE can get her back in action soon.

Despite Lynch’s unavailability, SmackDown general manager Daniel Bryan put Bliss in a match, and we would find out that Naomi would be her opponent after her music interrupted Bliss’ promo in the ring.

This wasn’t great, but Lynch being out of commission couldn’t have been known for too long because WWE was even hyping the Women’s Title match hours before the Kickoff Pre-Show took the air. Bliss and Naomi didn’t have much time to prepare, so it’s understandable this match is likely something to forget. Naomi got the win after reversing a cross-arm breaker and pinning Bliss to the mat for the three.

Bliss will challenge Lynch for the SmackDown Women’s Championship on the November 8 episode of SmackDown in Glasgow, Scotland. In the meantime, I wouldn’t be surprised to see a couple more matches involving Bliss and Naomi, with Bliss getting the wins to build to her title match. That’s why I think Naomi got the win here, despite the No. 1 contender getting pinned. I don’t think there’s any harm or foul here.

Bray Wyatt finally got his chance to headline a pay-per-view after three-plus years and took on Randy Orton in the No Mercy main event Sunday night. Of course, the real main event was the first match of the pay-per-view, but the ending of this match delivered in a waya main event should.

These guys had an entertaining match with a few good spots, so it wasn’t lacking in terms of action. There weren’t really any supernatural happenings going on during the match – naturally – after the entire build to this feud featured a hell of a lot of histrionics and supernatural crap. After getting handily beaten by Brock Lesnar, I had a feeling Orton may walk out of this one with the win, rendering my prediction of Wyatt as the victor null and void.

However, there was a reason I picked Wyatt. He needed the win maybe more than anyone on the SmackDown roster … with the exception of Ziggler. When Orton was getting ready to deliver an RKO, the lights went off and Luke Harper returned, marking the first appearance for the Wyatt Family member on WWE television since March when Raw emanated from Philly.

Harper, who was nursing a torn ACL, simply stared down Orton, who succumbed to the Sister Abigail finisher from Wyatt.

With Harper back and Erick Rowan reportedly out for a while with an undisclosed injury, it looks like the Wyatt Family is gaining some momentum moving forward on Tuesday nights. The thing with this is WWE needs to continue to create a good storyline with the Wyatts, especially if this feud with Orton isn’t over yet. Wyatt needs to be made into a monster again. I just don’t know if it’s going to happen.

All in all, it was another very entertaining offering from WWE’s blue brand Sunday night. They didn’t have much help going head-to-head with the second Presidential Debate, the MLB Playoffs and Sunday Night Football, but starting the show with the true main event was actually a good thing. I hope to see more of the flipping around the card moving forward for all pay-per-views, but it also wouldn’t surprise me if this was a one-time only thing.

I expect another entertaining episode of SmackDown on Tuesday night, and stay right here for your Raw and SmackDown recaps Tuesday and Wednesday morning, respectively.