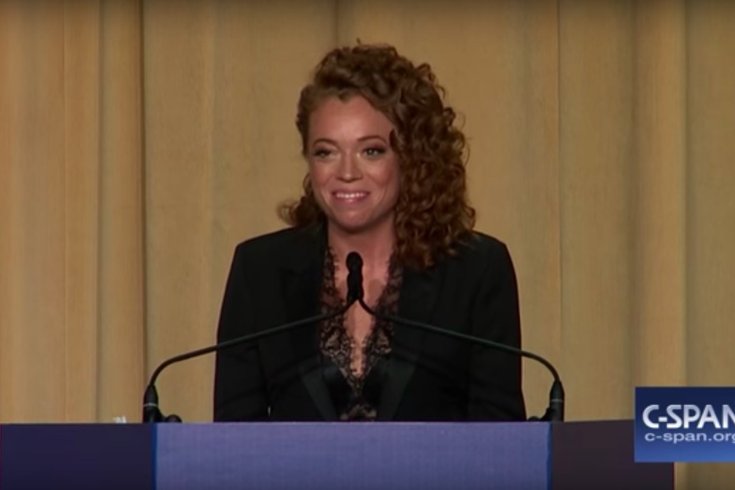 Comedian and “Daily Show” writer Michelle Wolf managed to take shots at Kellyanne Conway, Chris Christie, Sarah Huckabee Sanders, and all of CNN in a White House correspondents address that has audiences split.

The event continues a long tradition of comedians publically roasting politicians and the media that covers them, usually directly to their face -- who could forget in 2011, when Seth Meyers ridiculed Donald Trump for even suggesting he would run for president, all while Trump silently stewed in the audience?

This time around marked the second consecutive year Trump declined to attend the event as president. While this was a big deal in 2017, along with the fact that the big-name Hollywood guest list was severely dwindling, this year the focus is on Wolf.

While some found her jokes hilariously on point, others found them inappropriate and disrespectful -- most specifically Wolf's set of jokes about White House Press Secretary Sarah Huckabee Sanders, which included a suggestion that Sanders makes here eyeshadow out of lies. This all unfolded while while Sanders was on stage, just a few feet from the comedian.

That and other moments have audiences divided.

There were two speeches last night:

The worst part of Michelle Wolf’s garbage performance last night wasn’t her nasty riff on Huckabee Sanders. It was that dumpster fire abortion joke. But few were as offended by her literally celebrating baby killing as they were by her knocking eye shadow.

Michelle Wolf dropped truth bomb after truth bomb, while the president delivered a speech laden with lie after lie. And yet politically the contrast between those two events was like a wet dream for Trump. That's the sorry predicament America is in right now.

If you’re part of the press whining about Michelle Wolf’s WHCD speech yet shrugging at the hateful rhetoric from 45’s speech last night, make no mistake you are part of the problem.

And you’re only upset bc deep down you know Wolf’s speech was true.

Chelsea Clinton: “No I don’t. That’s not factually accurate.”

NYT: “HOW DARE YOU ATTACK A WOMAN ON HER LOOKS!”

- Those who call Michelle Obama a man

I would like to thank those members of the press who walked out of the WHCD last night while Michelle Wolf (a disgusting piece shit) who attacked Sarah Sanders.Sarah is a hard working woman who should be supported and praised by her fellow woman in the media. Wolf is disgusting!

If reporters and others were offended by Michelle Wolf—fine. But after rationalizing vicious insults for two years, all Trump supporters have forfeited all claims of outrage.

Don’t understand journalists who are offended by this. Did you hire Michelle Wolf to make jokes about other people? What she said is true. https://t.co/mjQmcIYBIw

Some of y'all act like Michelle Wolf called Sarah Sanders a nasty woman and said she's bleeding from her whatever.

The richest country in the world being unwilling to help its poorest people is the biggest joke of all.

Michelle Wolf destroyed herself and the #WHCD, not Sarah Huckabee Sanders. pic.twitter.com/tojb7Z5eOh

I have spent years defending women on both sides of the aisle from sexist attacks & digs on their appearance. Michelle Wolf did neither - she rightly blasted Sanders' character & her penchant for lying to the American people.

Here are some other noteworthy moments from Wolf's address:

“I’m 32 years old, which is an odd age. Ten years too young to host this event and twenty years too old for Roy Moore. He almost got elected.”

“Mr. President, I don’t think you’re very rich. Like, you might be rich in Idaho, but in New York, you’re doing fine.”

"Trump is racist, though. He loves White Nationalists. Which is a weird term for a Nazi. Calling a Nazi a White Nationalist is like calling a pedophile a "kid friend" or Harvey Weinstein a "lady's man." Which isn't really fair; he also likes plants."

"Mike Pence is what happens when Anderson Cooper isn't gay."

"[Pence] thinks abortion is murder. Which, first of all, don't knock it until you try it. And when you do try it, really knock it -- you gotta get that baby outta there."

"We've got our friends at CNN here. Welcome guys, it's great to have you. You guys love breaking news, and you did it. You broke it. Good work."

And, to close out her address: “Flint still doesn’t have clean water.”

Wolf also took jabs at Kellyanne Conway, who Wolf described as having the perfect last name for her line of work, and Chris Christie, saying, “Republicans are easy to make fun of, you know, it’s like shooting fish in a Chris Christie.”

What do you think? Watch Wolf’s full set below.