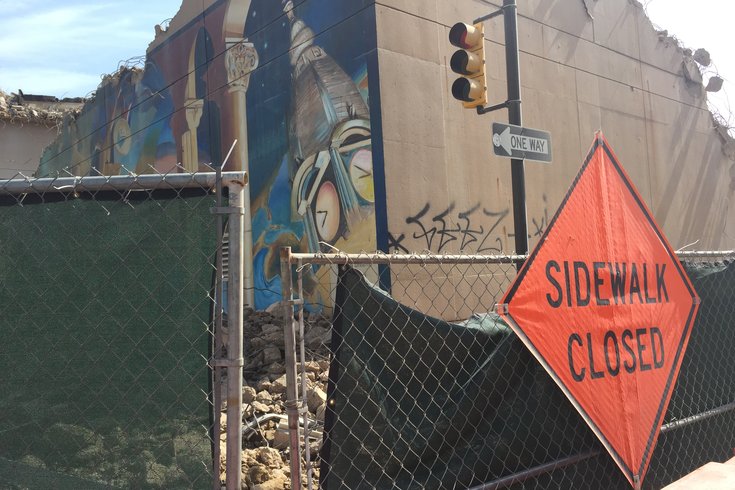 Temple University tore down the unused William Penn High School, across the street from Freedom Theatre, to build a new athletic field.

Sharing space with an Obama bobblehead and an array of African art on Rajendra Ramoon Maharaj’s desk at Freedom Theatre is a chunk of concrete, about six inches in diameter. It’s an unlikely souvenir of the New York-based theater director’s time with the historic North Philly company, where he’s serving as guest artistic director this season.

This bit of detritus flew off of a bulldozer in the block-square construction site across Broad Street and nearly struck Maharaj in the head.

“I think I must be on the right track,” he said, “if the universe is saying, ‘Keep your head up and keep going.’”

That’s one way to interpret a near-death experience with a chunk of rock. But its continuing presence on Maharaj’s desk is a reminder of the extremely close-to-home motivation behind his interpretation of Vinnette Carroll’s 1971 musical review “Don’t Bother Me, I Can’t Cope,” which opens at New Freedom on Thursday night.

Maharaj’s take on the show, conceived by Carroll with book, music and lyrics by Micki Grant, is set at that construction site across the street, where Temple University tore down the abandoned William Penn High School and is building a new athletic field for its students.

“The buildings are changing, but there’s a collective consciousness about keeping the history alive.” —Sandra Norris Haughton

“I got my union card here 15 years ago,” said Maharaj. “Temple was a presence then, but it’s amazing to see the amount of the city that they’ve bought and continue to buy. This was a community before it was a campus, and it still is. I think William Penn High School is a metaphor for the relationship that many people in this area feel with Temple: that it’s a separate city, its own entity that continues to exist in this community but not exist.”

Through the window of her own office two floors below, New Freedom Executive Producing Director Sandra Norris Haughton looks directly out on what is now an empty lot, surrounded by chain-link fencing and crawling with construction vehicles. Thinking back to her own student days in the 1970s, she recalls protesting Temple’s incursions into the neighborhood then. “Now it’s 40 years later and nothing has changed. They’re still tearing down the neighborhood.”

Not that the view was much better before. Haughton, who is also the founder and president of the Camden-based historic preservation nonprofit Heritage Collaborative, makes it clear that William Penn wasn’t exactly an architecturally significant hill to die on. “I was never a fan of William Penn High School,” she said. “It looked like a prison. I think they were training our young people to be used to a prison environment with the little windows and security. So in a way, it looks better, but I don’t think Temple should be able to just come in and buy up the neighborhood and not be accountable.”

From her vantage point on the corner of Broad and Master, Haughton can point to a number of nearby buildings that tell the neighborhood’s rich history. The very building in which she sits was one of the first mansions to be built on Broad Street, originally the home of brewer William Gaul and later a center of the city’s cultural life as the residence of Edwin Forrest, referred to as “the greatest tragedian of his time” by a plaque mounted on the exterior. Freedom Theatre, one of the oldest African-American theaters in the country, has called the building home for nearly half a century.

The historic Blue Horizon boxing venue is on the same block, the mural of Muhammed Ali, Joe Frazier, George Foreman, and Larry Holmes on its wall facing the theater. Across Master Street is the Greater Harvest Baptist Church, built in 1873. Just north of the former William Penn site is the Leon H. Sullivan Human Services Center, which has all the curb appeal of an industrial park but houses a variety of social service organizations in the name of the prominent minister, civil rights leader and anti-apartheid activist.

“There’s a great deal of history in this area,” Haughton says. “We’re really the institutional memory for this neighborhood — places like us, the church across the street, even the [Columbia North YMCA], even though it’s new. The buildings are changing, but there’s a collective consciousness about keeping the history alive. But we’re being surrounded by these academic institutions with more money, more people, and more expertise, so for smaller groups, it’s an uphill battle to have your voice heard.”

“If this building wasn’t a National Historic Landmark, I have no doubt that Temple would buy this for their drama department. They would suck this up in a heartbeat.” —Rajendra Ramoon Maharaj

For its part, Temple says that while most of the site will be used as playing fields for intercollegiate soccer and lacrosse, field hockey, track and field, there will also be a track that will be publicly accessible. There are also plans for a job-training center on a portion of the property, to be undertaken in collaboration with the Laborers' District Council Education and Training Apprenticeship Fund. “With an LDC job-training center in North Philadelphia,” says Brandon Lausch, Temple’s director of strategic marketing and communications, “more local residents will have convenient pathways to success.”

Haughton isn’t resistant to change. She relates stories of the theater’s early days when founder John E. Allen Jr. would ask prostitutes and drug dealers to clear out of the immediate area when his students came to the building. Today’s better-lit streets have done much to remedy the area’s crime-riddled past. But just walking around the block is enough to bear witness to the university’s encroachment, as those historic buildings are hemmed in by apartments touting signs for Temple Villas and Templetown Realty.

“It’s a delicate dance,” Haughton admits. “Nothing stays the same — ever, anywhere — but the biggest challenge is balancing old and new. You’ve got to let new people in because neighborhoods are living, breathing entities. But at the same time, we really need to know that at the end of the day there’s going to be the old and the new together.” 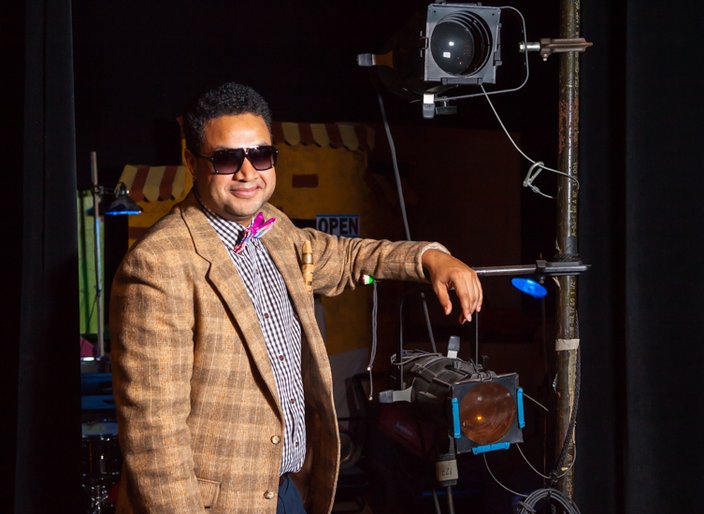 Maharaj hopes that Freedom’s production of “Don’t Bother Me, I Can’t Cope” will give voice to that sentiment. A self-avowed “big community organizer” with a background in criminal justice, he’s taken time to walk the neighborhood and talking with locals about their feelings about the changing neighborhood. “We’re engaging the students in our school and also religious and community leaders who feel that their church or restaurant is next,” he says. “Unless you’re a major chain like Foot Locker or CVS or Rite Aid, you’re nervous. If this building wasn’t a National Historic Landmark, I have no doubt that Temple would buy this for their drama department. They would suck this up in a heartbeat. It’s unapologetic.”

The events of the piece take place over a single day, as a group of protestors – culled from a selection of what Maharaj calls “archetypes” of the community including preachers, students, and homeless people – gather outside the construction site. Set designer Dirk Durossette modeled the set after pictures that were taken daily over the course of William Penn’s demolition. The character’ attitudes are based in part on “man on the street” interviews conducted with locals. “It’s fascinating to hear people talk about how this high school being torn down ties in with racism and classism and all these different things,” Maharaj says. “Giving people a platform to voice their pain and frustration and questions is at the heart of what Freedom Theatre does. I’ve always said we’re both a community theater and a national treasure.”

Don’t Bother Me, I Can’t Cope