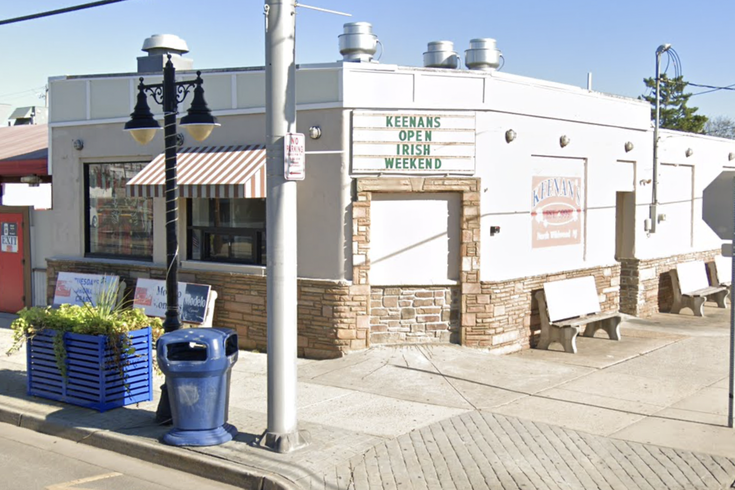 Danielle Oliveira, a detective with the New Jersey Attorney General's Office of Public Integrity and Accountability, was arrested for defiant trespass outside Keenan's Irish Pub in North Wildwood on Sept. 24.

A sergeant with the New Jersey Attorney General's Office of Public Integrity and Accountability was arrested in North Wildwood last month for allegedly attempting to return to a bar multiple times after she had been asked to leave.

Danielle Oliveira, 32, allegedly tried to sneak back into Kennan's Irish Pub through an exit during the bar's Fall Festival event on Sept. 24 – despite being warned not to return by staff and police. It's not clear why Oliveira was kicked out of the pub.

Portions of Oliveira's arrest were shared in body-worn camera footage obtained by Breaking AC, which first reported on the incident.

The mission of the Office of Public Integrity and Accountability is "to investigate violations of public trust and to develop policies that would rebuild faith in both government and our criminal justice system," the attorney general's website says.

In the body camera footage, another woman who spoke with police explained that Oliveira had left the bar to take a call about a police-involved shooting that might have required her to respond to the scene as part of her duty, had the shooting been fatal. Breaking AC identified the woman as Lt. Cortney Lawrence, a colleague of Oliveira's in the public integrity office.

"Not asking for a favor," Lawrence told a North Wildwood police officer. "Just trying to figure out what's going on."

After Oliveira had first been escorted out of Keenan's Irish Pub, a police officer patrolling on foot reportedly observed that the bar's staff were trying to keep her out. Oliveira allegedly remained near the bar's exit and continued to argue with staff. About 10 minutes after she agreed to leave, she allegedly tried to sneak back into the bar.

"She kept causing a scene," one North Wildwood police officer explained to another officer during the arrest.

At another point, Oliveira asked police to send a female supervisor to the scene. When a female officer arrived and removed a handbag from Oliveira's shoulder, Oliveira remarked, "That's a f***ing four-grand bag."

Oliveira told North Wildwood police that she was a lieutenant with the New Jersey State Police. She reportedly had been poised for a promotion to lieutenant at the state attorney general's office. Following her arrest, police said Oliveira would need "someone sober" to sign her out.

"The Office of Public Integrity and Accountability is aware of this incident," a spokesperson told Breaking AC. "It is the subject of an ongoing review and no further information will be released at this time."

It's unclear whether Oliveira is facing consequences from her employer as a result of the incident.