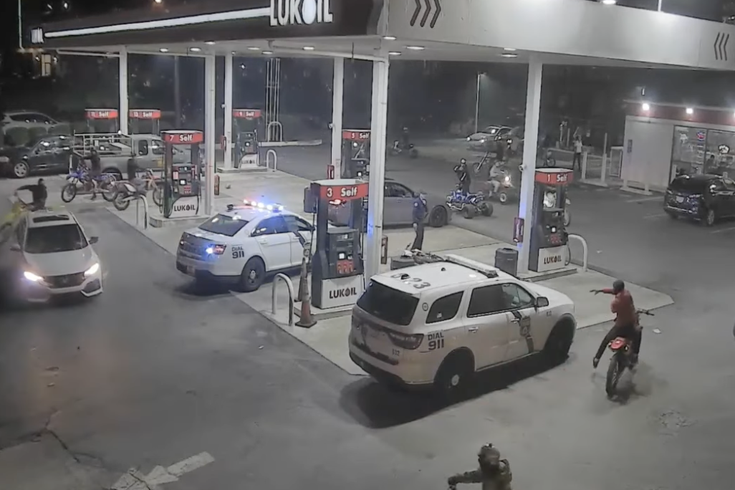 A dirt bike rider is wanted by authorities for throwing a brick at Philadelphia police vehicle on Sunday night and breaking the windshield. The incident happened at the Lukoil gas station at Delaware Avenue and Front Street in Northern Liberties.

Philadelphia police are searching for a man who threw a brick at a squad car Sunday night in Northern Liberties, breaking the vehicle's windshield.

The incident happened around 8 p.m. in the parking lot of the Lukoil gas station at Delaware Avenue and Front Street, police said. Police had pulled into the gas station to investigate a group of ATV and dirt bike riders.

One dirt bike rider had crashed near the gas pumps and fled the scene on foot. The 2011 Honda dirt bike had been reported stolen in New Jersey. The officers recovering the abandoned bike said they were surrounded by the group of riders who began throwing objects at police, including bottles and bricks, investigators said.

One police vehicle was kicked repeatedly before a man threw a brick at the windshield. The brick being thrown was captured on gas stations surveillance cameras. The person was wearing a face covering and a red sweatshirt with black sweatpants. His dirt bike was red and white.

There were no injuries reported.

Dirt bikes and ATVs are illegal to ride on city streets, but as a matter of safety, Philadelphia police have a "no pursuit" policy that makes the law difficult to enforce — particularly when large groups take over major roadways. In July, state lawmakers passed legislation to allow police to confiscate, destroy or sell illegal dirt bikes and ATVs taken from highways, sidewalks and public roadways.

Last summer, amid growing complaints from Philadelphia residents, the city passed a law classifying dirt bikes and dune buggies in the same category as ATVs, making riders of all of these vehicles subject to $2,000 fines and confiscation of their property.

Anyone with information about the man wanted police in Sunday's incident can call or text (215) 686-TIPS, or submit an anonymous tip online.