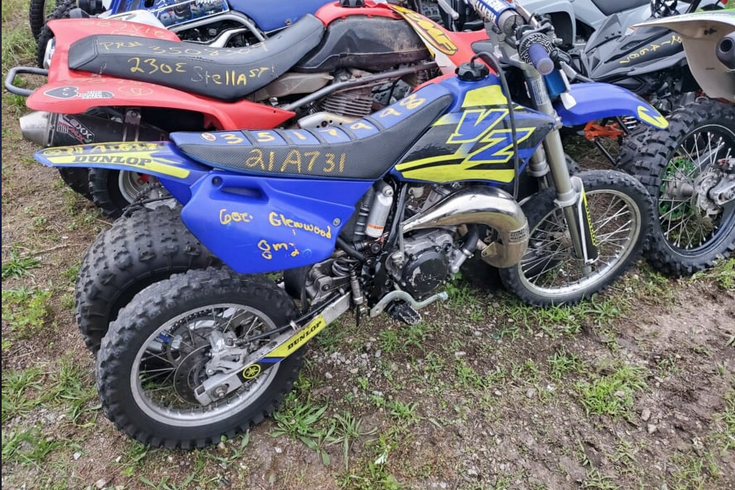 Philadelphia police seized 37 illegal dirt bikes and ATVs in their latest operation to round up the vehicles, which are prohibited on Philadelphia streets. District Attorney Larry Krasner has urged city leaders to develop other strategies to help to deal with the problems these vehicles have created.

With frustration mounting in Philadelphia over the prevalence of ATVs and dirt bikes disrupting traffic on major roadways, District Attorney Larry Krasner called Monday for more imaginative solutions to a cultural phenomenon that goes beyond enforcement.

Krasner held a news briefing in the aftermath of a deadly shooting in Port Richmond on Saturday night, when 21-year-old Angel Rodriguez was killed while riding his dirt bike. The incident happened during a large gathering of dirt bike and motorcycle riders near Aramingo Avenue and Butler Street. Rodriguez was shot multiple times by an unidentified motorcycle rider who remains at large.

The incident is the latest in Philadelphia to draw attention to illegal off-road vehicles that many communities regard as a public hazard and noisy nuisance.

But Krasner argued that the city's approach must consider these vehicles and their place in urban contexts more broadly.

"It is very (important) for us not to lump everyone together and for us not to stereotype," Krasner said. "There is a big difference between driving a vehicle down the street and endangering people by driving up and down a sidewalk. There's a difference between traveling at a normal speed and going at an extremely high speed, or going against traffic, or blowing through traffic lights. We have to be willing to see those distinctions if we're not going to fall into some of our old traps."

Krasner said the city's posture toward dirt bikes and ATVs should be to deter what is clearly dangerous and criminal behavior, but also to seek out alternatives for those who are part of a law-abiding culture.

"There are people in the dirt bike and ATV culture, there are people who ride motorcycles, who are good and law-abiding people," Krasner said. "And to the extent they are doing something that is a traffic violation, that needs to be addressed, but that is not the same thing as people whose conduct is endangering and is lawless, and whose conduct must be addressed more directly as a crime."

Traffic enforcement and prosecution in Philadelphia is primarily handled by police, with limited involvement from the D.A.'s office unless an appeal is made on a particular traffic violation. If behavior on a dirt bike or ATV rises to the level of a crime, the D.A.'s office will handle the case.

"Popping a wheelie and riding up a sidewalk with kids in strollers and people walking down the street, that's a crime," Krasner said. "That is reckless endangerment of another person. It is disorderly conduct and it may be a few other things depending on exactly what you're doing."

For years, police have conducted operations to seize as many illegal ATVs and dirt bikes from the streets as they safely can. On Monday, police announced the seizure of another 37 vehicles. More than 200 have been seized since the start of the year and authorities continue to seek information from the public about where they may be located.

Our dirt bike and ATV initiative continues. This weekend's sweep resulted in 37 vehicle confiscations. These initiatives will continue throughout the city. Have info on where these vehicles are being stored and/or operated? Call or text 215-686-TIPS pic.twitter.com/YAIfxAVEC6

Last week, City Council passed a bill amending the traffic code to classify dirt bikes and dune buggies in the same category of illegal street vehicles as ATVs. The bill, which awaits Mayor Jim Kenney's signature, imposes the same consequences for riding all of these vehicles — a $2,000 fine and confiscation by police.

Krasner did not object to City Council's tougher actions on dirt bikes, but said it's only one piece of the solution.

"I don't think what City Council is doing is necessarily the wrong move," Krasner said. "There is a role for enforcement that is proper. What I am saying is that there is a much bigger solution that has to occur here and has to be sensitive to the fact that there is motor bike culture all over many of our major cities, just like there is actually a trick bicycling culture that is increasingly prevalent in our major cities."

"We continue to work on a comprehensive solution to the problem of ATVs and dirt bikes," Listenbee said. "As the D.A. has pointed out today, we also want to focus on prevention, not just enforcement .... We're looking to the community and organizations across the city to help us develop comprehensive prevention models that take into account that a lot of young people who are not violating the law are engaged in riding dirt bikes and ATVs. We want them to do it legally and appropriately in the city and county of Philadelphia."

Town hall meetings and consultations with leaders in other cities where dirt bike and ATV use are common will be used to help Philadelphia develop strategies that go beyond enforcement, Listenbee said.

City Council also has recommended exploring the possibility of a privately-run facility near the airport that could be used by ATV and dirt bike riders.

Diversion programs and traffic safety education courses potentially could be a way to promote safer use of these vehicles on Philadelphia streets, while informing people who ride them of the penalties they face for violations and crimes.

In the meantime, Krasner noted that overly aggressive attempts to remove dirt bikes and ATVs from the streets could result in more harm than good. That's why police typically don't pursue people riding these vehicles and instead seek to determine where they are stored.

"The Philadelphia Police Department is very aware that this is a challenge," Krasner said. "When you start chasing people on motor bikes, you are risking killing people in the same way that vehicular pursuits used to be done. And it turned out they were more dangerous than not pursuing. That is a problem. It's not their fault, but it's a challenge that they face."

Krasner called for a more nuanced understanding of how dirt bikes and ATVs are used in Philadelphia.

"There is a difference in someone who is on a dirt bike that may not have all the proper lights and turn signals and such, and is popping a wheelie but is going with the flow of traffic, not blowing through lights ... There's a difference between that and going up on a sidewalk where people are walking and riding your motorcycle or your dirt bike up there quickly, or going against traffic, or blocking lanes so that you can blow through all the lights when the lights are red," Krasner said.

"This is a matter of degree — in the same way speeding in an automobile is a matter of degree. And we have to make sure that the justice that is done on the enforcement end is individual. Having said that, I do see this (enforcement) as being something that can certainly be a part of a larger and imaginative approach to how we address these issues."