What happens to the ATVs, dirt bikes seized by Philly police?

As city rounds up illegal vehicles, authorities have to dispose of them somehow 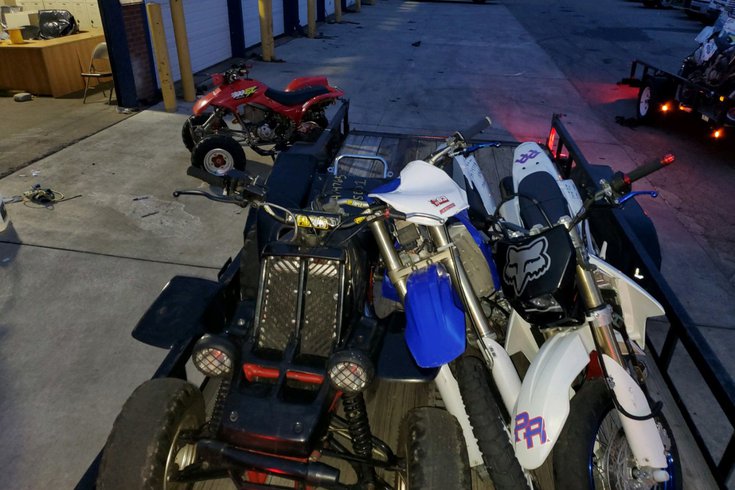 ATVs and dirt bikes are prohibited from being operated on Philadelphia streets or stored in public places such as roadways, sidewalks and parks. Police are looking to confiscate these vehicles, which residents say have become a growing nuisance in the city.

All summer long, the Philadelphia Police Department has been working aggressively to take ATVs and dirt bikes off city streets, where it is illegal to operate them.

On Monday morning, police announced the confiscation of another 23 ATVs and dirt bikes from across Philadelphia. In May, the department seized 60 illegal vehicles.

Our dirt bike and ATV initiative continues. Yesterday's sweep resulted in 23 vehicle confiscations, and 3 arrests. These initiatives will continue throughout the city. Have info on where these vehicles are being stored and/or operated? Call 215-686-TIPS pic.twitter.com/zEdKRVlxzv

“The operation of ATVs and dirt bikes on our streets is illegal, and poses a great danger to motorists, pedestrians, and even the riders," police commissioner Danielle Outlaw said earlier this year. "It also creates a nuisance for our communities. As this initiative evidences, we are committed to proactively disrupting this activity on an ongoing basis.”

Operations to remove ATVs and dirt bikes have been ongoing for years, involving hundreds of confiscated vehicles. It begs the question: What happens to them?

"It depends," said Sergeant Eric Gripp, a spokesman for the police department.

Often, bikes and quads that officers recover are listed in "stolen status," which then results in charges being filed against the people in possession of the vehicles, as well as related traffic penalties. In those cases, police attempt to get the property back to its rightful owner, assuming the vehicle is properly licensed, registered and inspected.

"Other times, the vehicle may be operated by its rightful owner, but said operator is unlicensed, or operating a vehicle not fit for street use on a highway," Gripp said. "In these cases, they are live stopped, and the operator has a chance to go to court, plead their case, and attempt to get the vehicle back."

To actually get the vehicle back, however, the operator must not only provide paperwork showing ownership, registration and other documentation, but they must either win their case or pay a civil penalty up to $2,000.

The fine print of the police department's protocols covering ATVs is located in Directive 3.21, which was signed into law by Mayor Michael Nutter in 2012. The directive details when, where and how these vehicles can be seized and impounded by police or the Philadelphia Parking Authority.

Since police are seeking tips from the public on where these vehicles are being stored, Gripp clarified what is considered illegal storage.

"It is legal to store these vehicles in private garages," Gripp said. "Storage in public storage units depend on the rules of the owner of the units. They are not allowed to be stored in public locations, (such as) roadways, sidewalks and parks. For example, a 'parking spot' in front of a home that would be legal to park a properly registered vehicle on is illegal for one of these vehicles, as they are for off road-use only. We will confiscate them from there."

Directive 3.21 gets a bit into the weeds about the meaning of "temporary" storage. For example, briefly keeping an ATV or dirt bike on a public sidewalk outside one's property is allowed for the purpose of transporting it elsewhere using another, legal vehicle or trailer.

But if an officer has probable cause to believe an unattended ATV has been used in violation of the city traffic code, or if they believe the operator has fled, then the vehicle will be towed by either the police or PPA.

Once police have seized an ATV, it will be stored until a final adjudication of the offense. If forfeiture is not awarded, the vehicle will be returned as long as all fines, fees and penalties are paid and the vehicle is in compliance with other laws.

If forfeiture is awarded, police have a few options:

The Police Department shall dispose of the vehicle in an appropriate manner, which may include destruction of the vehicle or such other manner of disposition that, in the judgment of the Department, reduces, to the greatest extent practicable, the opportunities for the vehicle to be used in any manner that violates the provisions of this Section or the Vehicle Code.

"A lot of these vehicles are of the 'off brand' variety, and are not properly — and can't be — registered to operate on roads," Gripp explained. "They don't have proper VINs, or any other valid identifying, legitimate identifiers. They often originate from the Far East, and are sold by discount stores under different brand names. These vehicles are often times unclaimed, and end up destroyed, as they are not VIN'd or registered."

Gripp referred questions about auctioning vehicles to the PPA.

"Only properly VIN'd, non-stolen-and-unclaimed vehicles could be auctioned off," Gripp said.

A spokesperson for the PPA said the last time an ATV was auctioned off was in June 2013.

For the most part, only police are impounding ATVs and dirt bikes, not the PPA, which hasn't been asked to do so since 2018, the spokesperson said.

The police department continues to seek tips from the public to help locate ATVs and dirt bikes that are not just illegally operated, but illegally stored in the city.

While Directive 3.21 breaks down various scenarios for these vehicles, Gripp said the policy is fairly simple in most cases.

"If you can't get a license plate for it, you can't operate it on roadways," Gripp said.