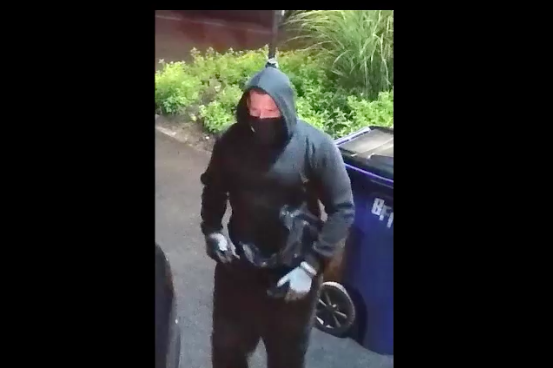 The suspect pictured above is believed to be linked to about 1,000 car break-ins in Bucks County and South Jersey. Investigators say all of the cars that have been entered were left unlocked.

Bucks County authorities are searching for at least one man who has spent the past year breaking into nearly 1,000 cars in several municipalities, including some on across the river in New Jersey.

Investigators released information Friday about the spree of break-ins that began in September 2019 and appears to be linked to one suspect. Officials did not rule out the possibility that the man is working as part of a group of thieves, but video and witness evidence points to a lone man involved in numerous thefts.

Authorities said all of the vehicles that suspect entered had been left unlocked. They warned residents to make sure their cars are locked.

In multiple accounts of the incidents, the suspect is described as wearing similar clothing: a black sweat suit, dark-colored gaiter mask, gloves and white and orange Nike sneakers. The suspect also is known to wear a satchel-style bag slung across the shoulder, which he uses to stash the stolen items.

According to investigators, the man has targeted cars in nearly every municipality in the mid-upper to mid-lower parts of Bucks County, often striking several vehicles in night. More recently, break-ins have occurred at a higher rate across state lines.

Items, including vehicle registrations and insurance cards, credit cards and loose change have been stolen from vehicles, as well as smaller items like pens and sunglasses, police say.

Surveillance video of the suspect from a home security camera shows one of the break-ins. The suspect flees the scene with distinct style of walking and running.

Anyone with information about these crimes can contact a local police department or Buckingham Township Detective Timothy Johnson (215) 794-8812, ext. 246 or by email at tjohnson@buckinghampa.org.