Homicides have increased by 32% since last year 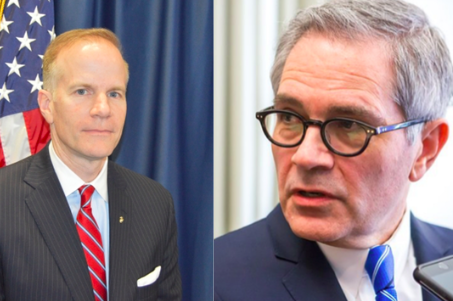 McSwain, who oversees the Eastern District of Pennsylvania, highlighted more than 10 cases he believes have been mishandled by Krasner's office. He also attributed a spike in violence in Philadelphia to Krasner's progressive criminal justice policies.

"Armed murderers cannot be permitted to walk the streets of Philadelphia in the name of criminal justice reform," McSwain, who was appointed by President Donald Trump, said at a press conference. "The staggering homicide and shooting rates in Philadelphia are proof that the District Attorney’s radical experiment has failed. Homicides, shootings and serious violent crime have all skyrocketed in 2020 – from already intolerable levels that existed in 2019 and 2018."

McSwain announced a three-count indictment against 28-year-old Khalif Tuggle, who was initially charged in a robbery, carjacking and fatal shooting in January 2017.

Tuggle allegedly shot Thomas Peterson in the chest, dragged him out of his car and left him to die as he fled in Peterson's car.

Krasner's office agreed not to prosecute Tuggle for first- or second-degree murder in exchange for information on an accomplice, which McSwain said never materialized. Under Tuggle's current sentence, he could be eligible for parole in about 10 years. If convicted on federal charges, he could face life imprisonment.

In another case, McSwain revealed federal charges against 53-year-old John Allen Kane, a convicted felon who was found to be in possession of a firearm during a January 2018 traffic stop. Kane was on probation for committing his second homicide in Philadelphia.

Kane since has been arrested on the federal charge and remains in federal custody.

"The federal cases against defendants Tuggle and Kane are the latest efforts by my office to serve as a counterweight to the chaos in Philadelphia created by local criminal justice policies that coddle violent criminals," McSwain said. "These policies create a culture of lawlessness; they leave criminals emboldened; and they have inevitable consequences – one of which is a murder rate in Philadelphia that is the highest it has been in nearly 15 years.”

"The violence has been pervasive and it is destroying the soul of the city," McSwain said. "In the last month alone, 48 people have been killed and hundreds have been shot. And the average age of the shooting victims is getting younger. Tragically, the vast majority of the victims are racial minorities. I can’t say it any clearer: the District Attorney’s policies come at the expense of minority communities."

Krasner's office did not immediately respond to a request for comment made Monday afternoon.

In June, Krasner joined local leaders and community members in announcing a gun violence prevention collaborative, stressing the need to address root causes such as underfunded schools, limited mental health assistance and a lack of employment opportunities. He has emphasized the traumatization of neighborhoods through a cycle of poverty, violence and an overly punitive criminal justice system.

More broadly, Krasner has called for reforming Pennsylvania's cash bail system, which he has called unjust and inefficient.

"In the absence of a cash bail system that allows prosecutors and magistrates to make individualized decisions, my office will continue to simulate a no-cash-bail system by seeking very high bails for the most serious and dangerous offenders and seeking bails that do not require cash for non-serious offenses in order to prevent COVID-19 from spreading in jails during the second wave of the pandemic in Philadelphia," Krasner said in July.

In his remarks on Monday, McSwain laid the surge in violence squarely at Krasner's feet.

"We can draw a straight line from these policies to the carnage on the streets," McSwain said. "My office has examined the circumstances underlying many of the recent murder cases in the city and the inescapable conclusion is that a great number of these murders were made possible by the District Attorney’s Office’s willingness – indeed, its eagerness – to offer sweetheart plea deals to violent defendants. Deals that allowed those defendants to quickly get back out on the street and kill."